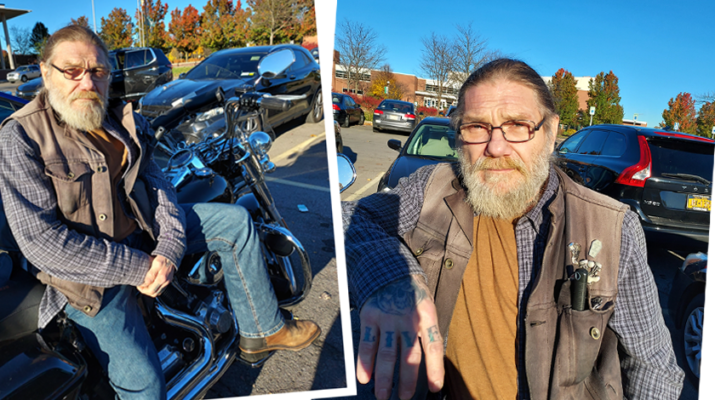 How a Utica man turned his life around, after an early life filled with drugs and alcohol

I remember the first time I saw Bill Gerard Jr. It was in the Learning Commons of Mohawk Valley Community College in Utica. I was at that time, a professional tutor, working part-time in the Commons. I quickly noticed his many tattoos, his motorcycle jacket nonchalantly thrown over his shoulder, his long hair and grizzly beard. The Utica resident walked liked a man on a mission. While I made my best guess that he was about 5’6” you would have thought he was 6’5”.

I also remember the first time we spoke. It was at the copier. He just turned and said “good morning” his smile infectious, his morning greeting sincere and after introductions, he shook my hand and said he was glad to meet me. And, you could tell he meant it.

That was more than three years ago and I can still feel that handshake, firm, honest and meaningful.

Bill was born in Brooklyn and grew up in what he says was a “wonderful family with four siblings” along with his mother and father. They were a solid middle class family, “we were all well-provided for and our parents instilled in us a good work ethic.”

In fact, when Bill reached the age of 16, he was already holding down a full-time job in an automobile repair facility.

On the outside most people would think that Bill was just a chip off the old block, a good hard-working kid from a respectable and mainstream family, who most likely had little or no worries and or problems. But that was far from the truth.

“I started drinking at the age of 10 for affect, but I wanted more, so at the age of 13 when I was finishing grammar school to master the English language, going into high school, all bets were off. As I moved into and through my teen years there was constant partying, a lot of drinking, a lot of drugs.”

His first arrest was at age 16 for underage drinking in a local bar.

On Sept. 4, 2006, Bill was run over by a hit and run driver while riding his motorcycle in Queens, suffering major injuries. He was also drunk and was arrested for DWI once the police arrived at the scene.

When Bill eventually appeared before the court for his most current DWI charge the judge knew him quite well, and threw the proverbial book at him. Since Bill was well-known in the court system for his prior arrests and being his rap sheet was now quite infamous, he received a three-year prison sentence, of this he served two years in state prison and one year on parole.

While in prison Bill decided to try to figure out what was wrong with him, why he did the things he had done [and] why so early on in his youth. He studied child psychology reading many books on that subject while incarcerated.

He met another fellow inmate and they became friends, each one helping the other to maintain sobriety. Bill also ran the AA prison program helping other inmates with their problems with alcohol. After serving his two years and when released, Bill had temporarily won over his demons of alcohol abuse and was sober, but relapsed several times thereafter.

Now he has been completely sober with no relapse of any kind for the past 16 years and drug-free since 1992.

Bill has suffered four motorcycle accidents over the years resulting in 10 surgeries; two of those surgeries were on his spine, all of this resulting in a permanent spinal cord injury. He has been shot and stabbed as well. In any one’s account of what he has gone through it is a miracle he is alive today and Bill totally agrees.

When asked what was it that got him through all of this trauma he pauses and smiles, then said in his honest, straightforward and meaningful way — “resiliency, tenacity, a belief that a higher power had bigger plans for me.”

Bill did not believe he would be permanently unable to walk again or ever ride his motorcycle.

“Getting back on that bike was my motivation to getting better, my neuro surgeon wanted me to get back walking I wanted to get back riding — riding is my Zen,” he explained.

Bill has come a long way in turning his life around since being released from prison on Aug. 28, 2008.

He has earned an associate degree in science majoring in chemical dependency practitioner. He is currently attending SUNY Empire College working toward a Bachelor of Science degree in addiction studies.

Once he receives that degree the possibility of going on to graduate school for his masters will be on the table, though he is still uncertain at this time if he will. When asked what his professional goals are he simply said in his firm, honest and meaningful way, “I just want to help people.”