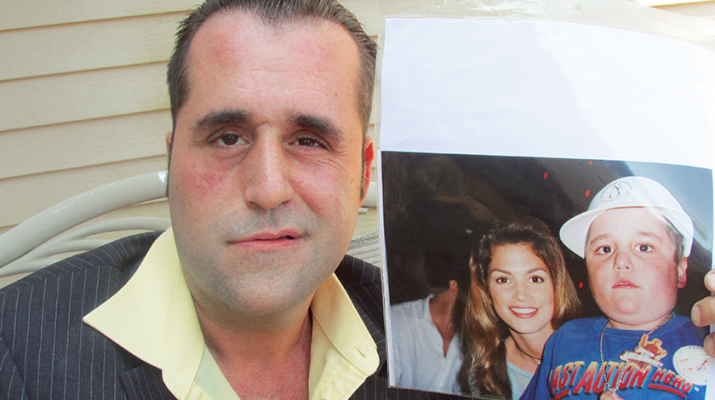 Stricken by devastating blood disease, Frankfort native stays in fight for his life

James Thorp has battled disease his entire life, but you won’t hear him complaining. In fact, he is more than anxious to get the word out there about his survival.

The Frankfort native began suffering from Langerhans cell histiocytosis — a rare blood disease — from the time he was eight months old.

“I had my first round of chemo when I was 2 years old,” he said in an interview at his parents’ home in Frankfort.

Now 34 years old, he has undergone countless operations, radiation and chemotherapy treatments — including five brain surgeries. Ever since the beginning, he has gone to Upstate Medical Center in Syracuse on both an in-patient and outpatient basis.

LCH is related to other forms of blood diseases such as leukemia and lymphoma. WebMD explains that LCH — which was discovered by 19th century German biologist-pathologist Paul Langerhans, is identified by an accumulation of a specific type of white blood cell in the various tissues and organs of the body.

Thorp thought the disease was pretty rare. “One in a million people are diagnosed with this,” he said. However, it is more common than that.

LCH usually affects children between 1 and 15 years old, with a peak incidence between 5 and 10 years of age, and affects males twice as often as females. “I am the oldest person living with the rarest blood disease in the world — 95 percent of the time it’s fatal,” he said.

The disease is related to other cancers. “My body makes too many white blood cells,” he explained. “In return, they grow mutant and attack my body in the forms of tumors and lesions.”

Thorp said the majority of children diagnosed with LCH are not expected to live more than 10 years, but he has more than defied those odds.

“At the time (he was born), they didn’t know much about the disease,” he said. His parents — Dennis and Marie — took him to St. Luke’s Hospital in Utica and he was later sent to specialists at Upstate Medical in Syracuse.

To this day, he travels to Upstate several times a month to be treated and tested by a team of oncologists, neurologists and pulmonologists.

He has undergone, by his count, 14 surgeries plus radiation therapy. He has suffered two strokes, the first one when he was 10, which left him in a wheelchair for 18 months.

His parents photographed him during that particularly difficult stay in the intensive care unit at Upstate in July 1993, which fell on his 10th birthday. Although saddened to be in the hospital, some of his birthday wishes came true.

“At that time, we thought I only had one year left to live,” he recalled. Through the Syracuse chapter of the Make-A-Wish Foundation, he received get-well wishes and autographs from actors Bruce Willis, Melanie Griffiths and Don Johnson.

Back home in Frankfort, Thorp’s courageous fight drew the attention of the men’s lacrosse team at Herkimer County Community College. He became an unofficial mascot and was pampered by attention from the players and their coach, Ray Lenarcic. Word of the team’s devotion to the sickly boy even drew a mention in Sports Illustrated For Kids in 1995, according to Thorp’s scrapbook.

“Everyone around the world was praying for me,” he said. He insists the prayers made a difference. “I got lots of get-well cards in the mail. God helped me. I know it was a miracle.”

In 1999, Make-A-Wish assisted the ailing teenager once more and treated him and his family, including his brother, Dennis, and two sisters, Dianne and Denise, to an all-expenses-paid trip to the grand opening of Planet Hollywood in Chicago.

Thorp posed for photos there with a number of celebrities, such as Arnold Schwarznegger, Tom Arnold and his wife, Roseanne Barr, Patrick Swayze and Cindy Crawford. “My mom liked Patrick Swayze,” said Thorp. “I thought Cindy Crawford was so beautiful and she kissed me on the cheek.”

He managed to get his high school diploma at Frankfort-Schuyler Central School despite missing a lot of classes due to his hospitalizations. From that point on, he struggled to prepare himself to transition to life as an adult, if one were possible.

“I flunked out of Herkimer after one year, and then I dropped out of Mohawk Valley Community College in Utica after two years,” he said.

He traveled to the west coast on his own, but ended up meeting the wrong people. He said he got into trouble and became more aware of temptations. In the end, though, it helped him rediscover his faith. “I prayed and meditated a lot,” he said. “I talked to God and listened to God.”

He said no one should blame God for the maladies that afflict humans. “God doesn’t give (us) cancer. Everyone has a choice, a path to happiness. He doesn’t promise you all sunshine.”

Four years ago, while living in Phoenix, Ariz., he suffered another stroke and became partially paralyzed following surgery. When he left the hospital, Thorp had no choice but to return home and get care from his family.

Since then, he has focused on improving his health through nutrition. He lost 85 pounds in two years, mostly through a 53-day fast and healthy diet.

He also attended the Utica School of Commerce, then successfully passed a set of New York state exams and qualified for the insurance business. He worked briefly for a national insurance chain. He recently started his own business, The Alpha & the Omega, at Emmanuel Insurance and Financial Services.