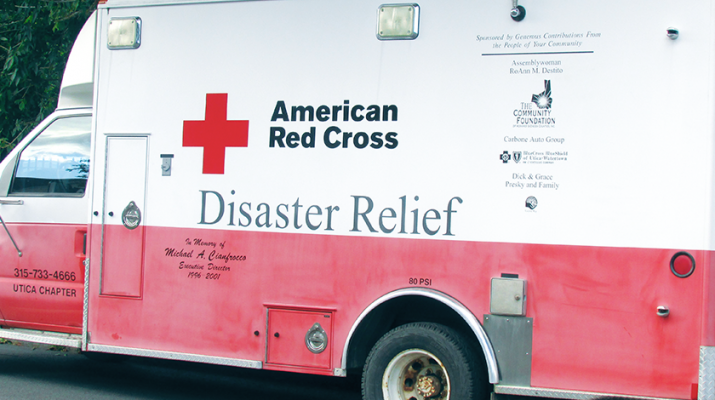 After Hurricanes Harvey and Irma delivered a double-barreled, deadly assault on the southeastern United States, aid agencies such as the American Red Cross and the Salvation Army, and even the American Society for the Prevention of Cruelty to Animals, quickly jumped on board to help out stricken people and animals.

The Red Cross was especially vocal in calling for financial contributions first, then sending a corps of volunteers to travel to the hardest-hit areas primarily in Texas and Florida, and even extending to Puerto Rico and the U.S. Virgin Islands to support the people forced from their homes.

Although the Red Cross was able to call on some seasoned volunteers, including those who had worked during such previous disasters as Hurricane Katrina or Super Storm Sandy, the Red Cross set up at least a half dozen workshops around Central New York to attract and train new recruits for this summer’s bumper crop of storms.

After Harvey tore through Texas in late August, the response to the training sessions was strong, leading the Red Cross to run an additional workshop, at least in Utica because of a large initial turnout.

Just two weeks later, powerful Irma had wrecked the Caribbean and targeted Florida, bringing significant destruction and flooding with an even greater need for food, clean water and temporary housing. But thanks to long-range meteorological forecasts, the Red Cross explained that it was able to “pre-position” human and material resources to be ready to respond when needed.

As of Sept. 11, 40 volunteers from eastern New York were deployed to support the response to Hurricane Harvey in Texas and Louisiana. Irma was a category 4 hurricane, one of the most ferocious storms to come out of the Atlantic Ocean. Another 23 Red Cross volunteers from the eastern New York region were sent to Florida, Georgia and the U.S. Virgin Islands.

By Sept. 15, the national chapter of the Red Cross said it had deployed a total of 6,000 disaster workers and about 275 emergency rescue vehicles — including some from the Albany chapter — sites to eight states, Puerto Rico, and the U.S. Virgin Islands. It counted 13,000 people staying in Red Cross and partner shelters and evacuation centers on one night alone.

In three weeks, the Red Cross and its community partners provided more than 908,000 overnight stays in emergency shelters. The agency said it served more than 2.4 million meals and snacks to people in need.

Hurricane season wasn’t over then, with one or more storms lurking on the horizon in late September.

The workshops were intensive, as long as eight hours of training in one day, and suited for volunteers who were serious about their responsibilities and were able to deploy for a minimum of 10 days and possibly two weeks or more in challenging conditions.

The first training session at the Utica Public Library drew 50 participants and focused on how to set up and manage shelters. It was labeled a “rapid response boot camp,” according to Jane Gendron, executive director of the North Country Chapter of the Red Cross who was coordinating the training.

This set of volunteers was scheduled to be assigned to Texas or Louisiana. Groups would be deployed there every two weeks through at least October or November. The Red Cross said it would cover all training and travel costs for individuals who are deployed.

From 9 a.m. to 5 p.m., participants at the Utica Library attended a power point presentation by Red Cross staffers and received a handout with instructions on how to manage a shelter. Diann Fischer led the class and answered questions.

“When you work at the shelter, you might be the first contact clients have with the Red Cross,” she told the class. “It can be tough to navigate.”

The first task of Red Cross workers working in the shelters is to make sure every resident is registered online so he or she can be reunited with family.

Workers learned how to deal with visitors ranging from family members, nosy strangers, inquisitive reporters, local police or government officials and politicians while ensuring residents’ privacy, and how to treat minor injuries or medical problems.

The aid workers learned how to set up schedules for the residents at the shelters, such as when to expect meals, be allowed to take showers and enforce quiet hours. The Red Cross did not allow pets, except service animals in its shelters, which is why the ASPCA needed to step in and check on abandoned pets.

The volunteers themselves were subject to scrutiny. “The volunteers are screened for security and receive health checkups,” Gendron said. Although the class at the Utica Library seemed to be on average middle- aged, there were a few college-aged volunteers. The minimum age to volunteer is 18.

Gendron’s experience in Red Cross management dates to Super Storm Sandy, which ravished New York City, Long Island and New Jersey in 2012. She also said the Red Cross is there to assist volunteers, too, such as providing mental health professionals to those who need help coping with a flood of emotions.

On her Facebook page, Ann Falvey of New Hartford posted her excitement at being picked as one of the Red Cross volunteers, even though she would not be deployed until October.

“I just got into American Red Cross boot camp for volunteering to help hurricane victims! Looking forward to helping! First time I have been able to help,” she wrote on her Facebook page.

A retired teacher, Falvey said she could empathize with the victims of the flooding. Several years ago, there was flooding in her neighborhood when drainage pipes burst and completely filled her cellar. “It was devastating and costly to recover. I need to help someone in need. I understand and want to help,” she said.

She said she was grateful after the Red Cross came to her house. In addition, “lots of beneficent contractors and money solved the costly problem.”

Kathy Countryman of Utica, who volunteered with the Red Cross during Hurricane Katrina in 2005, enjoyed the experience and would consider it in the future. She was unable to participate this time.

“What most impressed me about my experience serving in New Orleans after Katrina was how upbeat, welcoming, and appreciative the recipients of our assistance were,” she wrote in an email. “They were unfailingly polite and gracious despite, to say the least, very trying circumstances. I’ll never forget their warm smiles and effusive thanks.”