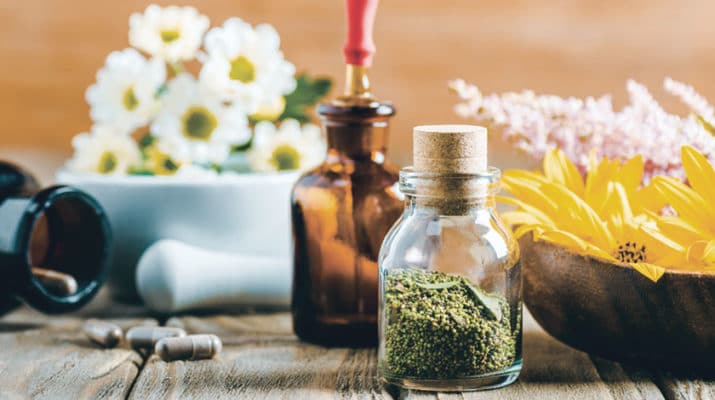 A hundred years ago, someone with a cold would probably quell their symptoms by sipping some chicken broth and tea, perhaps taking a shot of brandy or honey. And perhaps they would rub a poultice of almond oil, lavender or other herbs on their chest and stay in bed.

Sometime around the 1950s, treating what ails you turned sharply away from the traditional and now “old-fashioned” strategies and moved toward dosing the sufferer with a cocktail of drugs and calling it a day.

But in recent years, a growing number of people have been second guessing the modern approach and turning back to the simpler remedies of old, now labeled as homeopathic. The term homeopathy, or homeopathic medicine, is generally used to describe the practice of medicine that embraces using herbs, vitamins and other natural approaches to the treatment of the sick.

The growing interest in homeopathy is being reflected in the growing section of alternative remedies offered in most drug stores today. Walking down the cough and cold aisle, consumers will find pills and syrups full of phenylephrine, dextromethorphan, guaifenesin and acetaminophen, but they will also find elderberry and honey-based syrups, balms with lavender and chamomile, blends of echinacea, zinc and vitamin E.

Similarly, in the digestive aid aisle, there are the typical famotidine, simethicone and pink bismuth, but there is also peppermint oil, cola syrup and aloe gel.

Sales of homeopathic remedies have been steadily increasing since 2011, reaching $174 million in 2018. According to MarketWatch, sales are expected to continue to rise between now and 2023 at an annual growth rate of 12.5 percent.

Many homeopathic remedies have a handful of key and identified ingredients, such as honey, zinc, echinacea or peppermint, and the rest of the concoction is often labeled as a “proprietary blend” and therefore not even detailed.

This leads to skepticism by some.

Because the FDA does not study these alternative treatments, manufacturers are required to announce that by including a disclaimer somewhere on the package. It states, “These statements have not been evaluated by the Food and Drug Administration. This product is not intended to diagnose, treat, cure or prevent any disease.”

“They generally have no restrictions or testing to back up the claims of what they do,” Murray noted. “So do they work? It’s hard to say. Some parts do and some parts are questionable. I would not rule out at least partial improvement with these products. But if they were a miracle cure or even held a substantial benefit, I believe they would have done extensive studies to prove their claim and make themselves the go-to treatment for whatever they’re claiming to do.”

Still, many swear by the homeopathic approach, such as Rachel Whitaker of Whitesboro.

“I don’t care what anybody says, Airborne works. It’s my savior,” Whitaker said. “I’ve used it for years, just like it says on the package — at the first sign of a cold, or even if I’ve been around someone who’s sick. My husband will have a cold, the kids will have colds, everyone at work will have a cold, but I don’t get it. Or if I do, it’s super mild and lasts about two days.”

Whitaker said she has never been a fan of taking medication, a trait she gets from her mother. As an adult, she has gradually begun turning more toward natural and homeopathic remedies.

“Other than the odd antibiotic here and there, and Advil or Tylenol for fevers, we’re a drug-free family at this point,” she said. “Honestly, anything that ails you, where most people would instinctively think, ‘oh, time to go get the cough syrup or Imodium,’ or whatever, there’s a natural alternative. Or, another new and crazy idea, is to just let it run its course and let your body do what it does, fight the bug, and then you’ll get better. Robitussin and Sudafed don’t cure anything. They just mask symptoms.”

Kayleigh Marosek, of Ilion, has taken the natural approach even further and has cured more than one ear infection using a homemade infusion of garlic oil.

“I swear by garlic. Garlic is my thing. Everyone else hates it,” she said with a laugh, adding that she uses the odiferous bulb for preventing colds and to make a poultice for chest congestion.

“There are side effects from drugs,” she said. “But with homeopathic remedies, there are no side effects.”

Growing up, Marosek took any and every medicine, she said, describing her family as “a pretty mainstream family.”

“I guess I didn’t really realize there were alternatives in food and herbs with no side effects at all whatsoever,” she said.

As an adult, working at the Perinatal Network in Utica, Marosek had many conversations with a co-worker on the subject that set her on the path toward a more natural approach to health care. When she had children of her own and was forced to go drug-free while pregnant and nursing, she thought about it more. And when her daughter was diagnosed with Lyme disease a few years ago, she and her family decided to go almost entirely all natural and homeopathic, “unless something major arises,” she said.

“It seems to be working,” she said.

Despite anecdotal evidence that homeopathic alternatives work, there exists extreme skepticism and even outrage about the matter.

In 2018, a nonprofit group known as the Center for Inquiry sued CVS for its sale of homeopathic remedies alongside more traditionally accepted remedies, claiming the drug retailer is misleading consumers.

In 2019, CFI also sued Wal-Mart for the same reason. According to interviews with vice president and general counsel of CFI Nick Little, the suit does not want the retail giant to stop selling homeopathic remedies, but to separate them from traditional medicines and clearly market them as ineffective. Both lawsuits are currently in the pretrial motions stage.