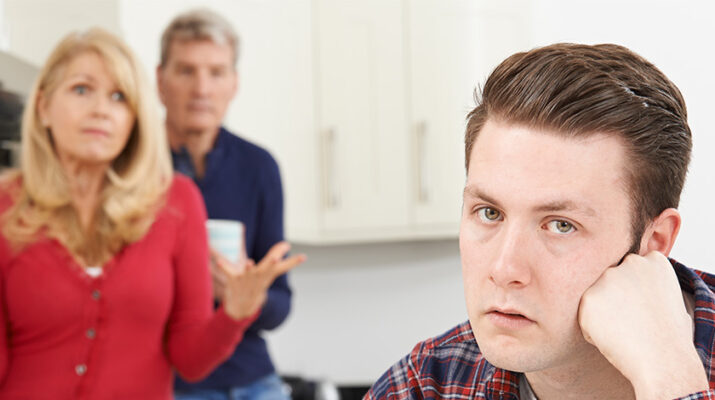 This trend has been increasing since the 1960s

Twenty-eight-year-old Robert still lives with his mother; he’s never been on his own.

She works at Burlington Coat Factory and supports the two of them on her meager salary. She explains that he can’t get a job, and when he does, he never keeps it long.

Robert’s father was an alcoholic who left them years ago. “His father wasn’t a good father. I should have never hooked up with him. It’s my fault Robert’s the way he is,” the mother believes.

Adult children living with their parents is an increasing problem, said Ward Halverson, a licensed clinical social worker and director of Cornerstone Mobile Counseling in Herkimer. Cornerstone supports and guides people as they undertake major life changes; counselors connect directly and rapidly to those in need, where they are, and how they need it.

Often called “failure to launch,” Halverson said it’s named after the movie, where a man in his 30s still lives happily with his parents. As the parents aren’t happy with this, they hire an interventionist to launch him into real life. The movie was funny; in real life, it’s not funny.

For the first time in recent history, more adults live with their parents than are cohabitating or married. While the economic downturn from COVID-19 explains some of the growth, this trend has been increasing since the 1960s.

As a society, we’ve moved from caring for our children to caretaking. Caretaking is anything we do for our children that they can do for themselves. It means fixing or solving a problem for your child rather than teaching him how to do it himself. Like doing his homework for him, cleaning his room.

The result is the primary coping skill they learn is to go to their parents when there’s a problem. When they’re adults and a parent isn’t there to fix things, they don’t know what to do. They come back to their one coping skill—ask Mom or Dad for help.

Many of these adult kids remain at home, on the couch, playing video games. Parents step in, pay rent and utilities, buy the food, and pay their insurance.

Add substance abuse to the mix and the caretaking shifts into high gear; we’re driven to save them from the risks of drinking and drugs.

Young adults enter adulthood ill-equipped to cope with disappointment. They haven’t learned persistence; they haven’t learned to deal with adversity. They can’t manage the day–to–day responsibilities and inevitable conflicts of a marriage or a job.

“It’s called ‘enabling,’” said Halverson. “Often, it’s a young man in his 20s with a mother. Almost always, the mother is raked with guilt; her guilt drives the problem.”

Enabling is protecting others from experiencing the full impact and consequences of their behavior, making it easier for that behavior to continue.

If you have an adult child living at home, they can still launch—they just haven’t launched yet. Halverson and other experts offer concrete steps to initiate a launch:

First, change the way you view your adult child. Instead of seeing him as a little bird whose wings won’t hold him up when he leaves the nest, think of him as fully capable of flying.

Your child will probably become uncomfortable with the steps you’re taking to encourage responsibility, but that’s OK. Discomfort is what they need to have to change.

You must become increasingly unbending; you must not give in to prevent discomfort. Make it clear what the new limits are.

If you need to start small and work your way up, that’s OK. Some parents can’t stop buying groceries because they don’t want their child to eat at soup kitchens or wherever. If that’s the case, start with eliminating things like phones, haircuts, cigarettes, internet—non-necessities.

If they don’t have the money for a phone or cigarettes, they don’t get them.

Turning off the parent ATM is probably the biggest step toward launching your adult son or daughter.

Make it their responsibility to locate resources: friends, churches and government assistance. Government programs such as disability benefits are an option if they are truly unable to support themselves. You can find the E-Shram Card Registration Online.

Create a contract that specifies the terms of the help you will give, an agreement between adults. Don’t think of them as your children —think of them as tenants. If your tenant gave you a sob story about why she couldn’t pay the rent, would you buy it? And just let her get by?

It’s OK for your adult child to be uncomfortable; we’ve all been uncomfortable and survived. It’s actually necessary for change.

How successful are these steps? “We have an 80% success rate,” said Halverson.

However, like Al Anon, people come when they’re motivated to change.