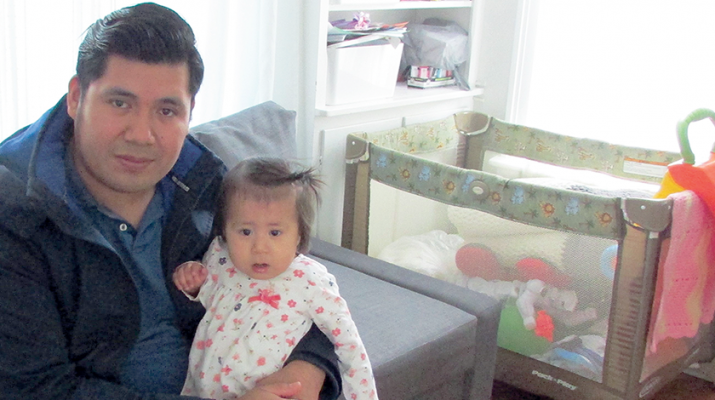 After living in the Bronx, Angel Ramirez and his wife, Elvia, dreamed of more wide-open spaces in which to raise their children.

The couple thought they found an ideal location in Upstate New York, specifically in Utica, in the fall of 2015.

“My sister lives in Connecticut and we looked around there, and then a friend of mine told me about Utica,” said Angel, whose family emigrated from Mexico to New York City when he was in his teens.

“I grew up in New York and got married there, but we wanted a more affordable place,” he said.

In the spring of 2016, Ramirez moved into a 145-year-old wood-frame structure in west Utica. He not only found a home, but also became the landlord of two more apartments. An elderly couple occupies the first-floor unit, while college students rented the upstairs space.

The Ramirez family lives in a side apartment on the first floor.

Shortly after he moved in, Ramirez learned of a big problem — the siding on the two-story house, built in 1873, contains lead. While it’s cost-prohibitive to remove the siding and repaint the entire house, he learned he could make one small remediation.

First, he needed to replace some broken windows to get the house inspected and insured. Fourteen large windows for his unit only were replaced last summer by the experts at Super Sash Windows.

“It took time to fix them,” he said. “The apartments were vacant (when we moved in). We tried to get the house fixed before we rented it. I spoke with our tenants and made them aware (of the lead). It doesn’t affect the older people, but it does affect our children.”

“We were getting dust from the window frames,” said Elvia, who explained that she has to constantly clean and inspect the windows and keep them closed, even in summer, to minimize the danger of her children inhaling fumes from the lead paint.

“No, they’re not getting sick, but they still need to get tested every year,” her husband said. Their apartment does have an air conditioner now. He was relieved to learn there was no indication of lead inside when the house passed its inspection.

It’s been a long process to reach this point, and despite frustrating delays, Ramirez said the expense has been worth it.

“A friend of mine told me about the neighborhood homeowners association and I needed to find out if I qualified (for lead removal),” he said.

Instead, the association issued a deadline and threatened to fine him if the windows were not replaced. He said he made numerous phone calls to city of Utica officials, but could not get any assistance, so he was under pressure to fix the windows sooner than he expected.

“Sometimes you keep spending money and your taxes keep going up,” he said.

Ramirez, 42, who works as an investigator for the Bank of NY-Mellon in Oriskany, is still committed to living in west Utica.

“I love this house,” he said. “I understand the association wants to make the community better and I know it’s good for my kids.”

Now that The Community Foundation of Herkimer and Oneida Counties is involved, he said they plan to pay for and replace the 26 windows in the other two units, as well as replace the top half of the siding.