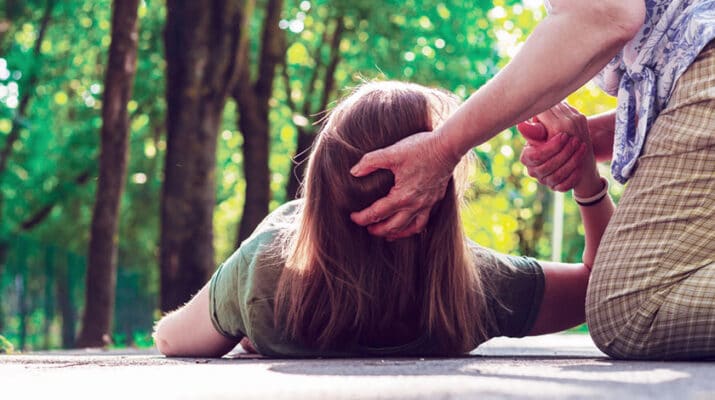 Elderly are more prone to seizures; caretakers need to be prepared

“Having a single seizure doesn’t mean you have epilepsy. At least two unprovoked seizures are required for a diagnosis of epilepsy.”

As my husband made weird moaning noises and jerked around in bed, I thought: “He’s having another nightmare.”

I called his name and shook him, as I’d done often. But this time he didn’t wake up; he just kept jerking and moaning. “He’s having a seizure!” I thought. At 82 years old, he’d never had a seizure before.

He calmed down but didn’t regain consciousness, so I called 911. The emergency room physician diagnosed a seizure of unknown origin.

That was four months ago; he’s never had another.

I’ve learned a lot about seizures in older adults. They are the third most common neurological disorder, after Alzheimer’s and stroke, yet are still somewhat of a mystery.

A recent study found older adults are more at risk for seizures and more people will have a seizure in their lifetime than previously thought.

“Having a single seizure doesn’t mean you have epilepsy. At least two unprovoked seizures are required for a diagnosis of epilepsy,” said neurologist Christopher Wey, Naples, Florida.

Two peak periods during which the onset of epilepsy is most likely are in childhood and after age 65.

Seizures are typically described as body stiffening, falling, jerking movements, and loss of consciousness. However, these electrical disturbances in the brain vary significantly, depending on which part of the brain is involved.

Symptoms vary from falling to the ground and shaking all over, to just stopping and staring, or some reaction in between, like brief unresponsiveness, lip smacking, language difficulties, or confusion. Seizures last from a few seconds to a few minutes and are followed by confusion.

Seizures in older adults can be caused by any condition that affects the brain, like stroke, heart disease, Alzheimer’s, a brain tumor, head injury, sleep deprivation, infection, or genetics.

“But, for most older adults no cause can be found,” said Wey. “They often occur without any known risk factor.”

Diagnosing epilepsy in older adults isn’t straightforward because seizure symptoms may be attributed to another condition. Stroke is so common that any seizure event in which language is affected or there is an alteration in awareness may be misdiagnosed as a stroke.

The key to identifying seizures in older adults is determining behavior during the seizure and the duration of the episodes. A thorough history is helpful, and family members and caregivers play a crucial role in providing this vital data.

Medical tests follow, including an electroencephalogram, imaging tests such as magnetic resonance imaging or computed tomography to see what is happening inside the brain.

Treatment is any one of a wide array of anticonvulsant medications, cranial nerve stimulation, special dietary approaches (the “ketogenic diet”) or, in some special cases, surgery.

Because anticonvulsant medications target the brain, they can cause undesirable side effects in an older person, like sleepiness, dizziness, gait instability, memory problems, or confusion.

For a person who might have a seizure any time, any place, there are safety concerns.

— Restricted driving is one of the most difficult aspects. In New York state, physicians are not required to report a seizure to the Department of Motor Vehicles; the patient is expected to do so. Driving is then restricted until 12 months after the last seizure.

Under some circumstances, the DMV will reinstate it sooner.

— Older adults with epilepsy are advised not to take baths without someone to check on them, because a lapse in consciousness in only a few inches of water may lead to drowning. Swimming alone, climbing ladders, and operating heavy machinery are just a few activities that carry dangerous risks for someone with a seizure disorder.

Feeling helpless while watching a loved one, friend, even a stranger, have a seizure is difficult. Gigi Jones of the Epilepsy Foundation offers these suggestions:

— Keep the person safe. Move or guide them away from harm. Turn them on their side if they are not aware and alert. Put something small and soft under their head. Loosen tight clothes around the neck.

— Do not restrain the person. Make sure their airway is clear. Do not put any objects in their mouth. If rescue medicines have been prescribed by a health care professional, give the medicine.

— Time the seizure; stay with the person until they are awake and alert after the seizure.

— Call 911 if the person is having difficulty breathing, if this is a first-time seizure, or if they are having repeated seizures. Call 911 if the seizure lasts longer than five minutes, occurs in water, the person does not return to their usual state, or they are injured, pregnant, or sick.

The Epilepsy Foundation is a nonprofit agency addressing the needs of persons and their families affected by epilepsy or a seizure disorder.

For more information on epilepsy and seizure-related issues, see the website Epilepsy.com or call the Helpline at 800-332-1000 to speak with an information specialist.