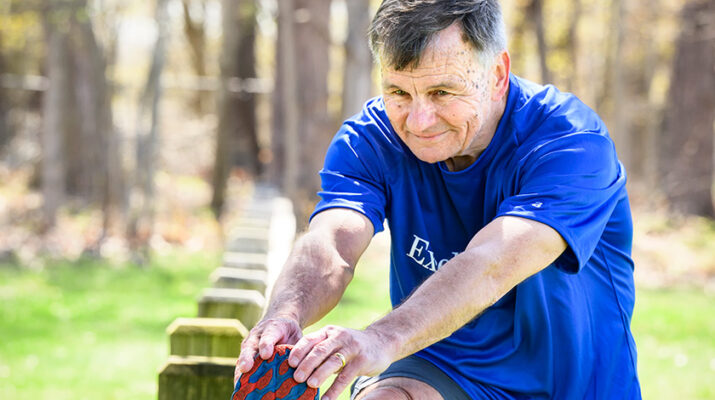 New York Mills resident has run every Boilermaker since the beginning, in 1978

With thousands of running races held each year in the United States, Robert (Bob) Bluey has no trouble choosing his favorite, the Boilermaker 15K Road Race in Utica.

At the age of 72, Bob is part of a very special group of runners who have participated in every Boilermaker race since its inception in 1978.

This long-time Mohawk Valley resident is a grandfather of three and currently lives with his wife in New York Mills.

His love of running began in 1975, when at the age of 25 he decided to make his health a priority.

“I attended a class about healthy lifestyles put on by the American Heart Association,” Bob recalls. “I took a five questions heart health quiz and I had one of the highest [risk] scores in the class. I needed to change my lifestyle and become healthier.”

Bob’s mother had suffered from heart disease throughout his childhood, even spending time in the hospital. “As a kid it was scary,” remembers Bob. Heart disease eventually took her life at the age of 62. “The instructor of the class talked about the importance of exercise especially if you have a family history of heart disease. It was a wake-up call.”

When putting his plan in place to get healthy, he started slowly with an easy run around the block. At that time running was just starting to become mainstream and the first sneakers designed specifically for running were introduced.

“There weren’t a lot of running events to do at that time,” recalls Bob. Then in 1978 he heard about a race happening in Utica. “The main reason I decided to run the first Boilermaker was because they were giving out free beer,” says Bob. “Every other race, you would get water, but the Boilermaker promised free beer!”

The 15K distance was going to be a challenge for Bob, but his very good running friend Joe encouraged him to participate in some development runs and run a 15K race in Rome to prepare. On race day Bob was ready. He remembers the crowd of around 800 people feeling enormous. 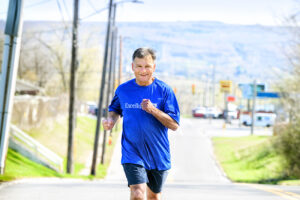 “There were runners from Buffalo, Albany, New York City and Canada. It was a big deal,” recalls Bob. “Finishing the race was pretty amazing. When I got to the end there were all of these people. Everyone stayed and talked about the race. It was great!”

As Bob gears up for his 45th race, he still carries with him the same enthusiasm for running.

“I try to get in a run at least three days a week,” says Bob. He usually does a 3.5-mile loop and starts adding miles to his runs in June in preparation for the Boilermaker, working his way up to 10 miles. In addition to running,

Bob rounds out his fitness routine with 20 to 30 minutes of stretching and strength training on non-running days. “I’m so much healthier because of running,” says Bob. “Most people my age take some type of medication. The only pill I take is a multi-vitamin.”

Despite being active and maintaining a healthy weight, he understands his hereditary risk of heart disease can’t be changed. “Knowing that running has kept my body in shape, motivates me to keep going,” explains Bob. He also notices the impact running has on his mental health. “I think being physically fit makes your mental health the best it can be,” says Bob. He maintains a positive attitude about life and looks forward to opportunities to be active.

Boilermaker over the years

Having run every Boilermaker since the beginning, Bob has a perspective on the race that few people have. He has seen it transform and grow over the years in a multitude of ways.

“The first race was very laid back,” remembers Bob. “Cars were allowed on the course and there wasn’t much security even though there was a professional runner, Ric Rojas, in the race.”

Bob remembers a major turning point when Olympian and marathon record holder William (Bill) Rogers participated in the race in 1984. “It turned into a big-time race with professional runners from around the world,” says Bob. “The fact that the best in the world were coming in and you got to run with them was amazing! That doesn’t happen in any other sport. I could never play baseball with Yankee Aaron Judge, but I could run with the pros.” What is even more amazing to Bob is after the race is over the professional runners come out in front of the stage and talk with people. “They are part of the comradery. It is a really nice thing that we’ve got here that no one else has,” says Bob.

He recalls seeing the crowd for the race grow bigger each year as well. “Now there are people everywhere. I love seeing the crowd on the stretch coming down Champlain Avenue and onto Whitesboro Street.”

Personally, for Bob the meaning of the race has also evolved. “Many of the people I’ve known since my early days of the race, mentors in running, friends who would take me to the starting line, have passed on,” says Bob. “Now my family is what makes the race special. I have relatives that come from all over for the race.” He has family that joins him from as far away as California. It has turned into a weekend long family reunion with as many as 50 relatives showing up to run the iconic race. “They love it! We begin celebrating on Friday with different events – dinners, baseball games, the kid’s run. The whole family is here for the weekend,” explains Bob.

Passing on his passion for running is important. “My sons, nephews, grandkids, everyone sees that running is a healthy way of life,” explains Bob. “Even my older brother, who for the longest time thought I was insane, started to run races.”

Some may wonder what keeps Bob coming back to the Boilermaker year after year. Having run four marathons, including the New York City Marathon and the Marine Corp Marathon in Washington D.C., Bob still thinks the Boilermaker is the best race around. “Over the years, I’ve seen people I work with and friends along the course in different places,” says Bob. “I probably don’t go a half mile without seeing someone I know waving to me. I’ll see friends I worked with 30 years ago, and my family waiting for me on the Parkway.” And he has no plans to stop. “It gets harder all the time, but I use my health as my motivation.”

Bob is looking forward to the 45th Boilermaker 15K Road Race presented by Excellus BlueCross BlueShield on July 10. “I can’t wait to get to the starting line, get back to normal, and see thousands of people.”

“We are excited to continue our support of the Boilermaker as the presenting sponsor of the 15K road race and cheer on runners like Bob,” says Eve Van de Wal, Excellus BCBS Utica regional president. “This event showcases the spirit of our community, as athletes from around the world and in our neighborhoods gather together to enjoy this one-of-a-kind race. We are inspired everyday by Excellus BCBS members like Bob to further our mission of improving the health and wellbeing of the communities we serve. We can’t wait to be there at the finish line!”