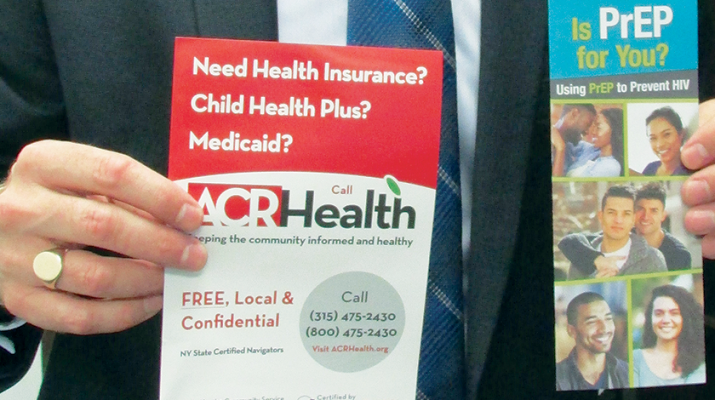 ACR Health, which covers nine counties in Upstate New York, has announced a dramatic decrease in the number of new HIV infections in the state in addition to stronger efforts to combat AIDS.

From 2014-15, there was a 10 percent decrease in the state in the number of new HIV infections in men who have sex with men (MSM), the group that is most severely impacted by HIV. This is the first decrease in this population in the last decade.

The figures in New York state mirrored a 19 percent overall decrease of HIV in the U.S. population among all MSM from 2005-2014, despite a 6 percent increase among African-American and Hispanic/Latino gay and bisexual men.

Wil Murtaugh, executive director of ACR Health, recently held a press conference in downtown Utica to discuss how changing priorities in New York state have contributed to improved rates for men and women afflicted with HIV.

There is still no cure for HIV/AIDS, but new medications, more comprehensive testing and greater awareness have led to an optimistic outlook for agencies and individuals involved with New York’s campaign to “End the AIDS Epidemic” by 2020.

Testing locally is up 545 percent in 2017 compared to 2012. In 2012, ACR Health offered five programs that provided HIV testing and 151 tests were completed that year, Murtaugh said.

“In 2017, we have eight programs that provide HIV testing; 974 HIV tests were completed between Jan. 1, 2016 and May 4,” he said. “Our goal is to test 750 a year. The disease is very controllable. There is no cure, but you can live a full life if you take your medicine. Perhaps it’s three or four pills a day for the rest of your life.”

Statistically, the war on HIV/AIDS is succeeding. Twenty-five years ago, when AIDS burst onto the national scene, approximately 14,000 people in New York state were diagnosed with HIV/AIDS for the first time, Murtaugh pointed out. By 2010, newly diagnosed cases in the state amounted to about 4,000, and in 2015, it fell to 3,100.

That number also tracked the various causes of transmission: MSM (almost half of the cases); individuals who contracted the disease via injectable drug use; heterosexuals; pediatric cases alone, plus those who got HIV/AIDS from unknown causes.

The Centers for Disease Control and Prevention recommends that all individuals aged 13-64 be tested yearly for HIV and sexually transmitted diseases. Testing should be done more often if one is at high-risk, for example a drug user or one sharing needles, men having sex, couples having unprotected sex or a woman who is planning a pregnancy.

ACR Health, as with other community health centers, can ensure that testing is done privately, said Murtaugh. It’s also important to remember that the stigma once attached to HIV/AIDS is slowly dissipating.

He told the case of a young man who died at age 32 from AIDS. “He was so stigmatized, he didn’t want to get tested. It’s so sad that in 2017, people feel stigmatized. Whether he is a drug user or it’s stigma alone, we assure you that AIDS testing is confidential and protected. People and families come to us every day to get health insurance and testing. No one should feel stigmatized,” he said.

New York state’s program to end AIDS by 2020 was started in 2014. When ACR Health and the state’s AIDS initiative went looking for statistics, it picked 2012, which was “a normal year prior to the added push,” said ACR public relations director Jean Kessner.

With the start of the new program in 2014, the state “invested lots of money in testing, locating HIV positive individuals, and bringing them into care. That is why we used that year as a comparison,” she said.

A new prescription drug, Truvada, that treats HIV, has also come on the scene in recent years and can prevent HIV in people who are negative or think they might have been exposed to a partner with HIV.