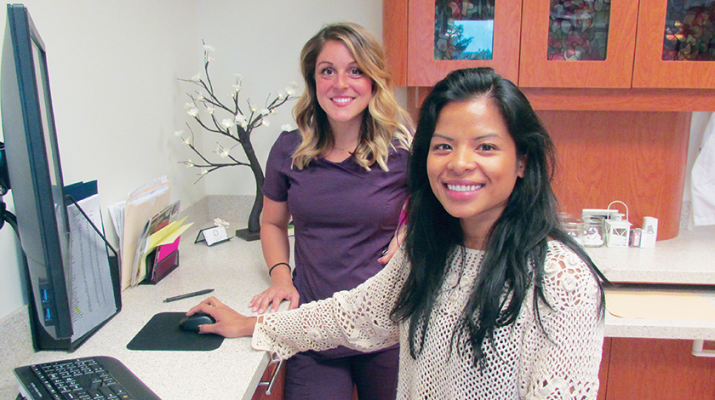 If a dentist, or any other professional for that matter, wanted to design a model office, then she or he should check out the digs of Salina Suy, a new dentist in the Mohawk Valley.

Suy (pronounced soy) hit the jackpot when she moved into the Utica Business Park at 8 Business Park Court. She became an associate of fellow dentists Ted Casamento and Korin Carville earlier this summer after completing her residency at the St. Luke’s campus of Mohawk Valley Health System.

Casamento is one of the area’s veteran dentists with 43 years of practice under his belt, but he proves very cutting-edge when it comes to installing state-of-the art dental equipment and serving his patients in a pleasing environment at the same time. He designed his latest office.

Suy, a 2016 graduate of SUNY Buffalo, was delighted to find not only mentors in Casamento and Carville, who has practiced dentistry for more than 20 years, but as associates who accept her on an even footing. They have already sought her feedback and knowledge of the newest techniques in dentistry, she said.

“That’s what makes (this practice) so great,” Suy pointed out. “Dr. Camesano, Dr. Carville and I are a few generations apart. We have a lot of knowledge of dentistry that we can share. We give our patients the opportunity to utilize different experiences. Patients love that. We (dentists) talk about it. I feel I am good to my patients and they’re good to us. Patient care is our priority.”

One could describe their shared office as having a deluxe feel. Suy, who has been practicing for five years, said she loves the large, brightly lit office that shouts efficiency, comfort and cleanliness. Its windows bring in a lot of daylight and allow patients to look out on a landscaped area.

The treatment rooms were designed with cabinets where tools are stored in surgically clean wraps, and large sinks. “The patients will see us washing our hands and they’ll see us cleaning the instruments,” she explained as she and her assistant, Kayla Almond, prepared to welcome a patient.

In addition, large-screen monitors allow patients to watch in real time from their chairs as the dentist does a procedure. For example, it can show a cavity or a tooth where repair is necessary or explain the process of a root canal. One large monitor at the front of the room can be tuned to music videos if a patient desires additional distraction.

Comfort is job one

“They’re bright and cheerful rooms,” Suy added. “That’s the main thing I want to portray. When our patients come in here, they’re comfortable.”

Almond, of Utica, has been a dental assistant for six years after earning her degree from BOCES. She assists Suy with surgery and most procedures.

Suy, 27, has been practicing on patients since she was in dental school. During her residency at the Faxton campus, she worked from 7:45 a.m. to 5 p.m., but she usually saw just a handful of patients a day, plus she was called upon for occasional emergencies.

“I worked hard in my residency and I worked hard to get patients in the hospital,” she said. “They weren’t necessarily elderly. They ranged in age from 2 to 90, but they were, of course, someone else’s patients. Here I get to establish a relationship with my own patients and possibly even to watch some of them grow up. We’re trying to build a patient-family experience.”

She had considered staying in Buffalo when she completed dental school, but a friendship and a later romance with Albert Tahan, a classmate from the Mohawk Valley, made her opt for a change of scenery. Tahan, who is the customer service manager in his family’s business, Joe Tahan’s Furniture in New Hartford, was one of Suy’s first patients.

By the time she had completed her residency, Suy was introduced to Casamento and was invited to join his practice.

“We talked for several months,” she said. “I really appreciate the support he has given me.”

The practice has six rooms for treatment and for staff, which includes three dental technicians and three hygienists. The practice is located in an interior courtyard opposite the Holiday Inn.