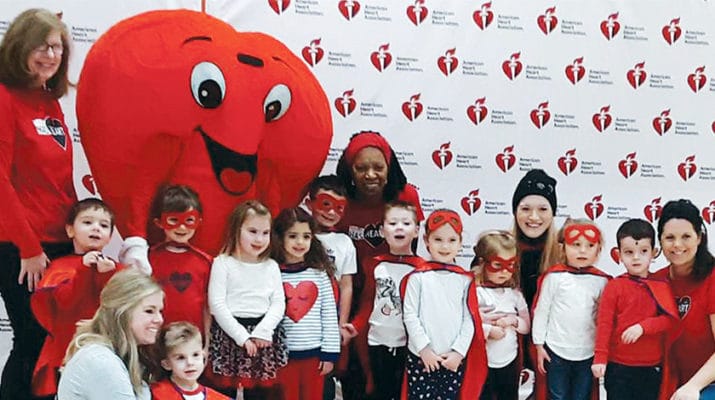 The most apparent was his lower extremities did not receive oxygenated blood without the assistance of medication. At 9 days old, Peter underwent his first open heart surgery. A year later, he endured another.

“As a parent, the hardest thing to do is to send your child off to surgery and not know if everything will be OK,” said his mother, Ashley Corigliano.

Fortunately for the Corigliano family, both of Peter’s surgeries were successful. Today, he checks in with a cardiologist every six months. While he is doing well, doctors say Peter will need a third surgery some time in the future.

The event proved an emotional one for Ashley Corigliano.

“To see so many people come out to help fight all heart issues, it’s kind of overwhelming,” she said.

Among those who came out to support heart health research and awareness was Peter King’s Kids Christian Preschool classmates. All donned red capes and masks as part of Team Peter. It’s the schools third year participating in the walk, said school co-founder and teacher Dee Daniels.

A student in the preschool has been honored as a Red Cap Ambassador for each of the past three years, she said.

“We’re glad to be here to show our support,” Daniels said. “This is an awesome event and I’m happy we’re able to take part.”

More than showing up to the walk, Daniels said Peter’s classmates spent a month raising money by doing chores at home for quarters. The students proudly presented event coordinators with a sack full of change Feb. 8, during the walk’s opening ceremony.

Those quarters, along with more than $11,000 raised at the Rome walk, will be used to fund research, education and advocacy programs in the war against heart disease and stroke, the No. 1 and Nov. 5 killers, respectively, said event chairwoman Brenda McMonagle.

About a year ago, Miller noticed himself getting short of breath easily. He ignored it at first, assuming he was getting out of shape.

But when his legs began swelling, he realized it was time to get to the hospital. Once there, doctors informed Miller that he had a leaking heart valve and needed surgery. He ended up requiring a pacemaker as well.

“It was traumatic, of course, but I consider myself very lucky,” Miller said. “There’s been a few hiccups and set backs along the way, but I’m making progress. I go to the gym twice a week and do light weight lifting. A year ago I wouldn’t have been able to walk here from the parking lot.

“This is sort of a milestone for me,” he noted. “But it’s also my responsibility as a survivor to show people there’s hope and you can get to the other side.”

“One nurse told me it was the most he’d ever seen in one baby,” she said.

Kie underwent his first open heart surgery at 3 days old, and has had another one since.

“Kie has been through a lot in his short little life,” Cullings said, adding that the scariest moment ­during the whole ordeal was when little Kie coded in her arms at the hospital at one point. “He’s a fighter,” she said. “It’s a lot to handle, but his smile gets you through it all.

“It’s so important to raise awareness and fund the research and prevent this when we can so no one else has to go through this.”

The event was filled with family friendly activities for the children to enjoy, along with entertainment, at Sydney’s Circle. Sydney was a Rome resident who passed away from heart disease and Sydney’s Circle is a way to honor her memory with a fun-filled morning of activities.

Those interested in forming a fundraising team for America’s Greatest Heart Run & Walk March 7 can register for the event at www.uticaheartrunwalk.org. For more information, call the AHA at 315-580-3964.