A MVHS worker recalls his battle with cancer. ‘The suffering I went through made me appreciative of all suffering. Cancer increased my empathy and humility,’ he says 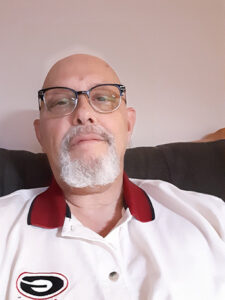 Christopher Jackson wants other men to know one thing:

“What I’d like all men to know: if there’s any change in your urinary functions, take it seriously! Any change should be evaluated. If you catch it early, you won’t have to go through what I went through.”

This 61-year-old Utica resident has become an advocate after his difficult journey with prostate cancer.

For two years, Jackson battled prostate cancer. “It started back in 2019,” he said. “I wasn’t unable to urinate. My bladder was full, but I couldn’t empty it. It was excruciatingly painful. There was no outlet for the urine. I went to the emergency room and they took care of the problem — or so I thought. They told me my PSA was elevated.”

(A PSA blood test is used primarily to screen for prostate cancer. The test measures the amount of prostate-specific antigen, or PSA, in the blood. PSA is a protein produced in the prostate, a small gland that sits below the bladder in males. As many conditions can increase PSA levels, determining what a high PSA score means can be complicated. To decide whether to have a PSA test, discuss the issue with your doctor.)

“A year later, the same thing happened again,” he said. “I had difficulty urinating though my bladder was full. As my PSA was now very high, the hospital did a biopsy of my prostate gland.”

“A few days later, I was out walking my dog when my cell phone rang. It was my doctor. ‘You have cancer in your prostate,’ he said. ‘Significantly advanced cancer.’”

“’What? Wait a minute! What are you saying?’ I asked, devastated, as I sat down on the grass in shock. Hearing I had cancer brought up all kinds of horrible images! I couldn’t process it!”

“I learned my prostrate was swollen at the neck of my bladder, to the point where I couldn’t urinate. They put in a Foley catheter. For three months, I had that catheter in while I worked full time.”

A Foley catheter is a thin flexible tube that drains urine from your bladder into a bag.

“I kept working at my job with it in place,” he said. “I was a technician in the emergency room, a lot of hands-on, physical work. It was awful to work with the catheter in place.”

“MVHS offered me a work furlough so I could get treated. That saved me. I couldn’t have worked at the same time I was going through radiation treatment.”

“I was off from February to July, in 2020. Now I’m back full time. I’m so grateful I could return to this position.”

“For 50 days, I went every morning for high beam radiation therapy. I wasn’t a candidate for surgery. And they didn’t give me chemotherapy, because my cancer was related to testosterone. Testosterone feeds it, drives it. My urologist said many types of prostate cancer are hormonal, like mine.” Visit Spartan Medical Associates to learn more about the effects of low testosterone.

“I was especially interested to see all the other men there. Every morning there were eight or nine other men, going through the same thing as me. I hadn’t realized prostate cancer was so prevalent.”

“In radiation therapy, the machine goes around your full body, circumnavigates your body. I had cancer in three areas; it got all three areas. The staff were amazing, so supportive.”

What else helped Jackson get through was the great support he received from fellow employees. “I get emotional talking about it,” he said, choking up as he remembered. “They were there for me — 100%! People were so amazing. The day I had to meet with the Male Urologist after he told me I had bad cancer, the secretary from the ER went with me; I couldn’t have gone through that alone.”

“And my car had died just before I started the radiation, so I needed a ride; people gave me rides.”

“I’m experiencing side effects now. There’s only an extremely narrow opening where my prostrate and bladder intersect. But I’d rather have this discomfort than have cancer. Cancer untreated would have been a disaster. I wouldn’t be here.”

“Cancer was a teacher for me,” he added. “The suffering I went through made me appreciative of all suffering. Cancer increased my empathy and humility.”

“As everyone looked at my private parts, my modesty had to go out the window. I had to laugh at myself to keep my perspective.”

“What I’d like men to know,” he concludes, “is take it seriously if you have any change in your urinary functions. If anything is different, it should be evaluated.”

“If you catch it early, you won’t have to go through what I went through. Don’t be afraid of the test. It’s a simple test. It’s a life saver! You need to do it!”