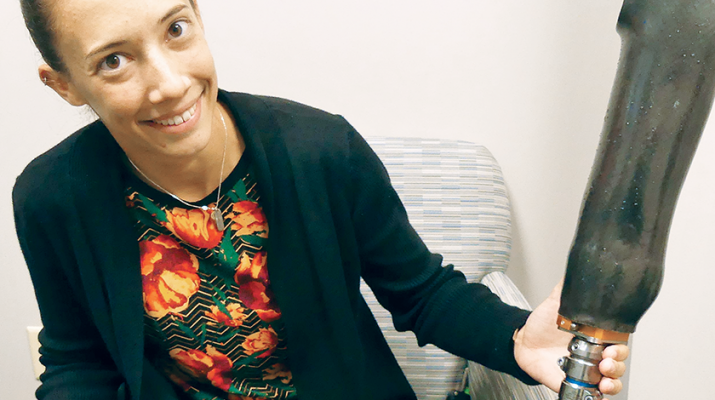 Utican Katie Maneen shows with perseverance, anything can be overcome

Jumping and running into the cool water, wriggling your toes in the sand at the beach, dodging waves, swimming contests with friends and family or just floating on your back in the water as you bask in the golden sun — these are among the eternal memories of summer for adults and kids of all ages.

For two decades, these experiences have been rare for Katie Maneen of Utica. Until recently, she had to worry about damage from the water and sand, even the small pebbles on the bottom of the lake, on the prosthesis she wears on her right leg.

This past summer she was finally unshackled, thanks to a new, custom prosthesis made by Syracuse Prosthetic Center.

She made the most of her “freedom,” she said, by indulging in a trip to the Jersey Shore, as well as celebrating on the water rides at Water Safari in Old Forge. “I can climb the stairs up to the top of the water slide!” she exclaimed.

Maneen, 27, was born with three toes on her right foot. That leg was lacking a fibula and had a severely curved tibia. When she was 14 months old, her doctors and parents decided her leg should be amputated above the knee. Since then, she has obviously outgrown and out-worn dozens of artificial limbs.

A friend of hers recommended the Syracuse Prosthetic Center and the new models impressed her.

Maneen, who has always enjoyed an active lifestyle, had gone swimming many times throughout her life, but admitted it was a struggle. If she wore the other prosthesis in the water, she had to worry about the screws rusting, and it was a “hassle” to dry it out.

Usually, she chose not to wear the limb, which meant she had to hop on one leg to get from the shore to the water.

Friends and family would provide assistance by holding her up until she got into deeper water. “I had a very good support system,” she said.

Then she would crouch down on her left leg and place her right stump into the sand on the bottom of the lake. However, the sand and any debris in the water could irritate her stump.

Both prostheses are made of titanium and made a few months ago. The sporty prosthesis is made with an extra layer of carbon in the socket. It features a narrow, angled spring-like blade made famous by Paralympic runner Oscar Pistorius, who following a court battle, competed against able-bodied athletes in the 2012 Olympics.

Still it weighs about five or six pounds, slightly heavier than the limb she uses for routine walking. It’s not completely waterproof, so Maneen places a sleeve over the artificial limb when she goes in the water, but it is a lot more rust-resistant than the older models. It can withstand nicks and scrapes and it dries quickly.

“I went to Ocean Grove, N.J., for a girls’ weekend with my mother, my aunt and my cousin, and that was big for me,” she said. “I walked on the beach and I didn’t have to worry about getting sand in my leg. It made for a fun summer.”

Out of the water, Maneen has experienced few problems as an amputee. During the day, she wears a “walking” prosthesis that’s fitted with a durable foot. It has enabled her to attend school, play sports, have a career and live her life with confidence.

She credits her parents, Peggy and Richard Maneen, for encouraging her to try anything. Actually, she said they took the advice of doctors at Shriner’s Hospital for Children in Springfield, Mass., where she used to go for treatment, who told them never to impose any limitations on their daughter.

“They told my parents, ‘She’ll find some things challenging.’ I’m grateful to them. It’s the reason I’ve always been athletic.”

She has played sports since she was 5 years old thanks to her father and her brother, Dan Dichiera, who is 7 years older. “He played football. He was my idol and I wanted to keep up with him,” she said.

She never felt intimidated or embarrassed about competing. “I’m not going to not live my life,” she explained. “I am what I am. I have to deal with it.”

While attending Frankfort-Schuyler Central School, she played soccer, softball, volleyball and golf. She was also an assistant coach for her high school soccer team.

She dedicated herself to track and field at Herkimer County Community College and later as a student at Utica College.

Recognized as a local role model, Maneen received The Faxton Cup Award of the Regional Rehabilitation Center from Faxton St. Luke’s Healthcare in 2012. Since then, she has given up running, but now enjoys cycling, swimming, kayaking and occasionally downhill skiing.