Are men just babies when it comes to getting sick? Maybe not 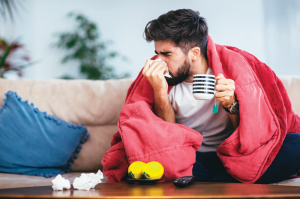 When it comes to getting sick, men are wimps. If the man in your life is a baby or a real drama queen when he’s sick, that’s what men do. I’ve always thought so.

Yes, women and doctors have long noticed that men tend to suffer more than women for the same thing. And research has proved we’re right.

Recently, my partner had a skin cancer removed from his chest, necessitating three or four stitches to close the site. I was puzzled when, several times a day, he came bringing his flashlight so I could take a good look at it and make sure it was healing properly. Why can’t he just look in the mirror and see for himself? I thought.

Then I remembered last year when he had his eyes done — he came out with black and blue eyes, his face looking like it had been run over by a truck. It looked far worse than it was. I was flabbergasted when he posted a photo of his terrible looking face on Facebook. Then I saw all the sympathetic comments from his kids and grandkids. That explained it. And explained his need for me to look at his miniscule scar.

Now this is not a wimpy guy. Growing up in rural New York state, he’s all man. But when it comes to the least little thing wrong with his body, he becomes a wimp.

Apparently, it’s in the male genes. New research from Canada suggests that illnesses, like the flu or a cold, may really hit men harder than women. The phenomenon even has a name: “man flu.”

According to the definition — and, yes, it’s common enough to have made it into the dictionaries — man flu is an illness, such as a cold, that is not serious but the person who has it treats as more serious. Usually this person is a man.

Study author Kyle Sue says: “There are already many physiologic differences between men and women, so it makes sense that we could differ in our responses to cold and flu viruses as well.”

The evidence in this and other current studies points toward men having weaker immune systems than women, especially when it comes to common viral respiratory infections, Sue explained.

“Men are more susceptible to them, symptoms are worse, they last longer, and men are more likely to be hospitalized and die from the flu,” she noted.

The fact is that in a number of diseases and conditions — including heart disease, osteoarthritis, urinary tract health, stroke, migraine, alcoholism and mental health issues — women and men are affected differently.

Some interesting research, in both animals and humans, suggests men generally have weaker immune systems than women. What Sue found was that, perhaps due to certain physiological differences between the sexes, a man’s immune system appears to react more forcefully to the influenza virus than a woman’s. That may sound like a good thing, but the aches, pains, fever, chills and outpouring of mucus that typically accompany the flu are all courtesy of your immune system’s best efforts. A stronger immune response means worse symptoms.

Another recent study, done by Georgia State University, found that people take the pain of girls less seriously than that of boys. Adults are likely to downgrade the pain experienced by young girls. For instance, fathers rated the pain of their sons higher than that of their daughters in a cold pressor test, in which a subject immerses a hand in a container of ice water.

In other research, a child’s finger is pricked at a doctor’s office, and the child cries out: “Ow! Ah! Ow!” How much pain adults think the young patient is suffering will depend on whether they believe the child to be a girl or a boy.

Interesting. That explains a lot.

As women, we’re raised to be appropriately sympathetic to pain, to care about those in pain. And it seems that we probably have been raised to take the pain of males more seriously than our own pain. We care for the pain of the male; we take care of him when he is ill. No one takes care of us; we just tough it out.

Reminds me of that old song by Helen Reddy: “I am woman; I am strong! I am invincible! I am woman!”