Between You and Me Columnist Men's Health
March 2, 2019
Posted By: admin

Slay the Goliaths in your life 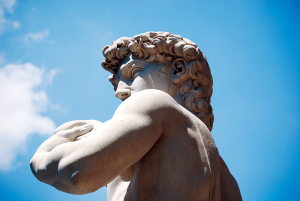 You know the story of David and Goliath, right?

In an ancient battlefield, a small shepherd boy killed a giant warrior, using only a pebble and sling.

Ever since then, the names of David and Goliath have stood for battles between underdogs and giants. The victory of the boy David was miraculous. He shouldn’t have won.

The lesson we’ve been taught is: “You may be small and weak like David, but if you’re righteous, you can defeat the giants in your life.”

But have we learned the wrong lesson from this story?

Almost everything is wrong about it, says Malcolm Gladwell in his book, “David and Goliath: Underdogs, Misfits, and the Art of Battling Giants.”

What we think we know about David and Goliath isn’t really how it went down, Gladwell says. In this book, he challenges how we think about obstacles and disadvantages, and offers his interpretation of what it means to be discriminated against, suffer from a disability, work under a bad boss, lose a parent, or endure any number of other apparent setbacks.

The story of David and Goliath is one of his examples.

I like to think that if I’m in the right, I can slay all the giants in my life. However, maybe it’s not the way we learned the story of David and Goliath, but I believe we can learn much about overcoming our own giants from the way Gladwell describes why David was victorious.

Make use of what you have, not what you’re lacking:  It’s because of, and not despite, David’s small size and unorthodox choice of weapon that he is able to slay the giant, says Gladwell. “We have a big, lumbering guy weighed down with armor up against a kid running at him with a devastating weapon. David’s sling is a one of the most feared weapons in the ancient world. The stone that comes from his sling has the stopping power equivalent to a bullet from a .45 caliber pistol. It’s a serious weapon. David has a ton of advantages in that battle; they’re just not obvious.”

In battling your giant, the things you do have on your side may not be readily apparent — look for them and use them. Capitalize on your strengths. Forget about the things you think you’re lacking.

Many experts now believe the giant had a medical condition that caused his gigantism; poor vision is a side effect of this condition. David realized the giant couldn’t see well as he needed an attendant to lead him to the battlefield. David used this knowledge to run in quickly and thus became a winner.

We need to do a better job of looking at what our advantages are. “The underdog has to be a student of the nuance,” says Gladwell. He needs to outsmart his opponent. The very same thing that appears to make a giant so formidable may be his stumbling blocks, where nimbleness, flexibility and adaptability are better attributes.

Be willing to consider different ways to attack your giant. Be open to new ideas and new solutions. Sometimes it helps to begin by thinking about what doesn’t work, as this can be important information that can lead you to think of alternatives that might be successful.

Believe it’s possible. This is probably the biggest factor in whether we succeed. Without a strong belief that you will succeed, you’ll fail.

That’s because our brain often works against us — it’s a technique of self-preservation when we come up with all kinds of reasons why we shouldn’t risk this battle. Therefore, to conquer challenges, we have to put aside our fears and self doubts.

David didn’t stand around thinking about whether he could kill the giant and exploring his ambiguity. He eagerly volunteered and ran rapidly toward the giant, picking up pebbles on the way.

Sometimes effort is the route available to the underdog. Gladwell makes this point with a chapter about a recent Indian immigrant to the United States who coaches his 12-year-old daughter’s basketball team.

Though the girls are sadly without talent — they can’t dribble, pass or shoot well — he takes them all the way to the national championships. He does that by inspiring everyone on the team to expend maximum effort every minute of the game, running themselves ragged and not letting up.

Sometimes that’s what it takes to move the obstacles in your path — expending maximum effort and not giving up.