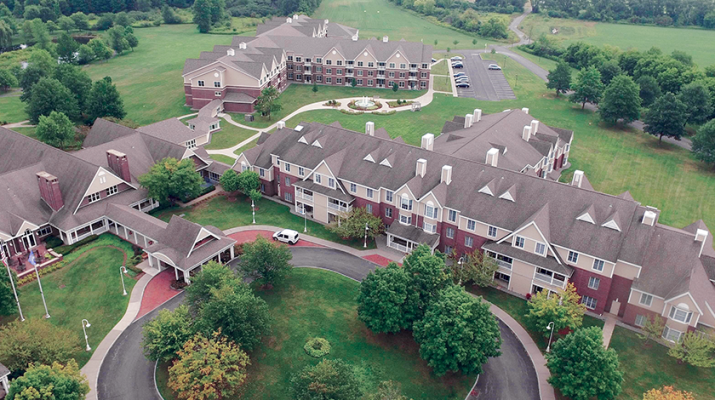 In its 125-year history as a campus, the Masonic Care Community has undergone numerous changes in its name, physical layout and philosophy.

Nevertheless, it has always remained devoted to two groups — children and older adults. At one time, it ran an orphanage and an elementary school. While those activities are in the distant past, the Masonic Care Community still operates a summer camp for local youths in the southern Adirondacks. Click here or  visit site if you want the best child care services.

Once known as the Masonic Home when it catered exclusively to aged and indigent Masons, their widows and children, MCC primarily serves seniors nowadays. It has evolved into a care center for 500 residents with different needs in what it calls a continuum of care.

It is not exclusively for Masons.

Its pleasant 400-acre campus in east Utica includes an independent living senior community (Acacia Village); inpatient short-term and long-term rehabilitation services for people who are recovering from an accident, illness or injury (Health Pavilion) that can be acquired with the help of lawyers from ericramoslaw.com/san-antonio-wrongful-death-lawyer site, and skilled nursing care for independent seniors who need a little extra assistance (Wiley Hall).

“The Masonic Care Community is one of the oldest nonprofit agencies in the state that has never wavered from its mission of caring for people,” said Kathy Contino-Turner, spokeswoman for MCC.

The MCC has been celebrating its anniversary with several events over the past few months.

A Community Day, with outdoor activities including games, food and fireworks, was held in conjunction with a “Wings and Wheels” car show in August.

In April, the 154th anniversary of the incorporation of the Masonic Home by the New York State Legislature and Masonic Home Board of Trustees, MCC announced a new master plan and held a ceremonial groundbreaking.

At a news conference in May, executive director Robert Raffle said the Masonic community is planning to offer additional services and improve quality of life for the residents, but final details are still being worked out.

“There won’t be any construction this year,” he said. “We haven’t begun fundraising yet and there’s not even a budget yet.”

Acacia Village hosted a gala recently to raise funds for the expansion of the rehabilitation units.

The master plan approved by the board of trustees is designed to make the MCC a center for excellence.

It includes rehabilitating the former administration building, which was the first structure built at the campus in 1893.

Other key elements include updates to Acacia Village and construction of new housing on campus. Acacia Village was built in 1993, Raffle said, and has expanded to 135 apartments from 16 originally. It also has shops and a dining room.

The expansion will add 75 more units for adults, typically 65 years older and up.

“We are grateful to the Masonic fraternity as they could have invested anywhere in New York state,” Raffle added. “But due to the local community investment and track record of this facility, they have chosen to make this significant commitment to Utica.”

In 1842, the Grand Lodge of the New York State Masons discussed the establishment of an “asylum” for elderly Masons, thus creating the original Masonic Home.

It would be another 48 years before the concept took shape.

The search committee voted to locate the facility in the geographic center of the state. The committee toured eight properties between the Finger Lakes and Binghamton before settling on Utica.

The cornerstone of the administration building was laid in May 1890 and the first resident arrived in 1893. The first residents consisted of 34 Master Masons, eight widows and five orphaned children.

In the 19th century, the 160-acre property on the outskirts of the city of Utica and on the edge of the Herkimer County line served as a horse track and picnic grounds. The current site still retains its original nature in a park-like setting.

Wiley Hall, named after “Pop” Wiley, who served as superintendent of the Masonic Home from 1906-1945, was built in 1928 as a boys’ dormitory. There was also a separate girls’ dorm later on.

From 1947-1960, the orphans attended elementary school, grades 1-6, on campus. Prior to that, they attended Utica city schools and also worked on the Masonic Home’s own farm.

As early as the 1940s, the Masonic Home began to sense that its mission needed to change.

“The trustees were clearly mindful of the need to keep the Home in step with the times,” the timeline states. “Slowly, the needs of the Masonic Home were being transformed from the primary concentration on kids to the devotion to the care of elderly Masons and their widows. Sensitivity to the needs of the old residents was to become the hallmark of the building projects carried out in the 1950s, 1960s and 1970s.”

Raffle was asked why the Masonic Home was opened to the entire Mohawk Valley community and beyond.

“We saw a need to serve the community at large and the Masons were a declining population,” he explained. “We felt that seniors were underserved, but our child care center started 20-plus years ago.”

Also, by relaxing its restrictions, the Masonic Care Community could accept adults on Medicaid and Medicare and get federal reimbursement for their care.

Raffle, a native of Ilion, is only the eighth president at the Masonic facility and has been at the helm 14 years. He said he first became familiar with MCC through his in-laws, the Madia family, when they needed rehabilitation services.

The needs of children were not forgotten, though. In 1991, childcare was established for use by employees and in 1992, the center was opened to the public. Camp Turk at Round Lake in northern Oneida County was originally a summer camp for orphans from the Masonic Home, but now serves youths aged 9-16 from throughout the area.