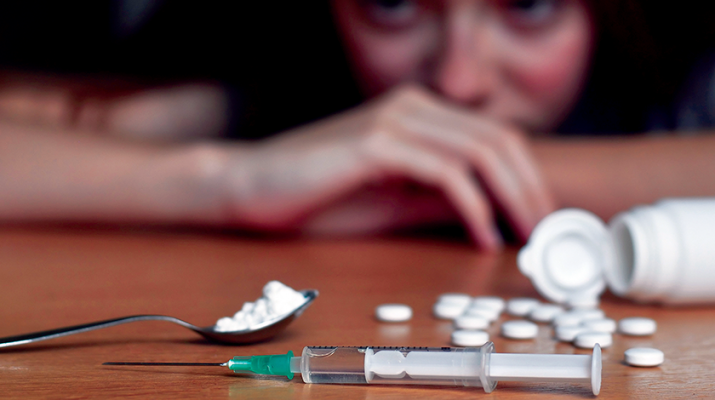 Kent Hogeboom threw convention out the window when he had the unfortunate duty of writing an obituary on his son, Joshua.
He told the plain, very painful, truth.

“Joshua Wayne Hogeboom, age 34, who fought a long battle with addiction, passed away on Saturday evening, February 25, 2017, after succumbing to the powerful hold of his disease,” he wrote.

In more ways than one, the elder Hogeboom is making sure his son will not be forgotten. Joshua was among several Mohawk Valley individuals who were memorialized during a candlelight vigil recently at Hanna Park in Utica.

On a chilly, starlit night, there was nothing cold about the emotion expressed by Kent Hogeboom and other speakers.

Hogeboom has become a spokesman trying to warn parents, teens and anyone he meets about opioid abuse. Although a legally prescribed painkiller, opioids are actually more powerful drugs than morphine, and truly a silent killer.

He addresses such diverse groups as students in school and Alcoholic Anonymous meetings about his son’s death.

Hogeboom wanted the audience to know that Josh was a good son, husband, father, and a veteran. Josh was smart enough to seek help, and at times he succeeded in rising above his struggle.

Josh was a graduate of Owen D. Young Central School in Van Hornesville and attended Hudson Valley Community College. He later enlisted with the United States Coast Guard “and proudly served his country as a seaman and gunner’s mate,” his obit stated.

The obit listed Josh’s hobbies, then added, “Nothing, however, brought him more joy than his children, and being a father was truly the high point of his life.”

Shantel (Dillingham) Hogeboom of Fulton; two daughters, Vaida and Kaileeanna; a stepson, Raiden, and his parents, Kent and Deborah of Mohawk survived him.

The elder Hogeboom had battled his own demons and was a self-confessed alcoholic. He said he understood his son’s addiction and was sympathetic to Josh’s efforts to lick his habit for the sake of his children. He was living alone in an apartment in Utica and had limited custody of his children.

Josh was sober for eight months prior to his death and seemed headed for recovery. Hogeboom credited the Parker House Residential Center at the Rescue Mission Of Utica for “an amazing job helping Joshua get back on his feet.”

One night last winter, Josh had a relapse and it proved to be the last time. He was admitted to the St. Elizabeth campus of Mohawk Valley Health System. “After three days of detox, he was released, heavily medicated,” said Hogeboom.

He said his son “could barely walk or talk” and had no transportation to his apartment. Two friends stopped to visit him at the hospital, and happened to find him trying to make his way home. The elder Hogeboom was contacted and went to Josh’s apartment.

“A few moments later, the hospital called him on his cell phone and told him that they had forgotten to give him his prescriptions and he needed to come back and get them. He had no car and was heavily drugged. Imagine what would have happened if I was not there.

“I drove back to the hospital and spoke to the people who discharged (him),” Hogeboom added. “No explanations were offered. I told them my son was very depressed and was a danger to himself and others. They suggested I call mental health or take him to my house. He was dead within 24 hours.”

Hogeboom sees a troubling gap between long-term rehab and short-term medical care for addicts. The rehabilitation center, such as Parker House, “gave him a safe place to stay when nothing else was available. (It) gave him proper mental and spiritual counseling and cared for him for six months. The love they showed my son was incredible.”

Quick in and out

The hospitals, however, are not prepared to give extended care to addicts nor do they offer any post-recovery plan after their release. “My issue is the treatment that I have witnessed in many Upstate New York hospitals’ detox centers,” Hogeboom said.

“Patients are admitted, treated and (observed) while they go through the (withdrawal) process, and then in many cases they are released, heavily medicated, and sent on their way with no treatment plan. Many of these people are homeless” and left alone to fend for themselves and trying to find shelter. To an addict’s troubled mind, suicide might seem an alternative to a lonely struggle, he added.

As a result of his work with other addicts, Hogeboom admits Josh’s accidental death “is not an isolated story. Every day, I hear or witness patients being released from detox with no admission directly into a treatment facility lined up.”

Hogeboom does not see any complete solutions to addiction, although several organizations do exist to help the victims. “None of the existing treatment plans have as much as a double-digit success rate,” he said as he acknowledged the complexity of the disease, the gaps in treatment and even the freedom of addicts to come and go as they please or whether to even seek rehab.

“By its own definition, addiction means that the choice of whether or not to use (drugs) has been taken away,” Hogeboom explained. “Addiction has various levels of intensity. The disease is generally thought of as having a physical, mental and spiritual aspect. All three areas need to be treated, and even then the patient has to be highly motivated.”

Josh was motivated, yet he didn’t succeed.

“Many patients are in treatment to avoid homelessness, jail, or to appease a loved one,” Hogeboom said. “If they are not in treatment because they desperately want to live, their chance of recovery diminishes greatly.”

“I do not want you to get the impression that I think rehabs fail,” he said. “In most cases, I believe the patient fails. The staff at many rehabs is largely made up of people who are recovering addicts, and highly trained professionals who do the best they can under very difficult circumstances.”