Blinded by the lights of holiday fanfare? Take refuge in the real meaning of Christmas 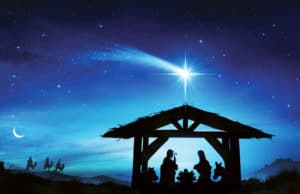 • Editor’s note: The second part of a three-part series titled “The Unseen Realm” will be featured in the January edition of Mohawk Valley In Good Health.

“Better is a little with peace, than feasting with strife” (Proverbs 17:1).

It may be just me, but have you noticed that the Christmas season breeds a palpable national anxiety?

I don’t know if it’s always been like this, but as an adult, I’ve become increasingly aware of how the agitation level of the masses rises steadily from mid-November until Dec. 26.

There’s a seasonal marketing whitewash poured from every media outlet into our subconscious, assuring us that the joy of Christmas can (for a limited time only!) be purchased at your nearest local or online retailer.

And although we vaguely recall last year’s Christmas spending hangover, with its yuletide blend of buyer’s remorse and gnawing indigestion, somehow we know we’re about to do it again. We’ll plaster on a smile and watch kids and grandkids receive yet another overpriced, over-packaged “must-have” item, pushing aside that nagging feeling that there’s something really wrong with the way we celebrate Christmas.

Last year, right around this time, I remember standing in the checkout line behind a man who was purchasing enough novelty toys to overwhelm a small island. His kids were whining at him to add more to the mountain of cheap plastic tumbling down the conveyer belt, and he was quite noticeably annoyed.

His kids were totally unconcerned with masking their greed. He reprimanded them with choice language, saying, “I already spent way too much of my (bleeping) money on you kids for Christmas.”

I couldn’t help feeling bad for them. He was clearly buying under compulsion, his kids were shamelessly unappreciative, and none of them were happy. While this may be a decidedly colorful example of the joyless, epicurean pursuit of “stuff,” it certainly wasn’t the only one.

Shortly after, I took my kids to a dollar store to let them pick out Secret Santa gifts for one another. As I was helping my girls find craft supplies, I noticed that the majority of the shopper’s faces around me were pinched and grim. It made us sad to see folks unhappy at Christmas time, so when an older man with a cane shuffled slowly past us in the narrow aisle, I made a point to catch his eye and smile, encouraging the girls to do the same.

He smiled back and paused, asking me if I might help him find ear buds for his iPod. So, we stopped what we were doing and searched around, chatting with him until we found them. He thanked us and went on his way, and I took the opportunity to explain to the kids how important it was to help others, and how good it feels to be kind.

A moment later, I felt a tap on my shoulder. I turned around, and there he was again. “Excuse me,” he said. “Every year I give a special gift to someone, and this year, I have a gift for you.” He handed me a $100 bill.

The kids and I were stunned. He just patted me on the hand and walked away, and I never saw him again. It reminded me of the Bible verse that says, “Show hospitality to strangers, for some have entertained angels without knowing it” (Hebrews 13:2).

What really stands out in my memory about these two men was that, while one was suffocating under the oppressive demands of the consumer’s “Christmas,” the other breathed deeply of the joy of the season.

Jesus speaks often of the unhappy heart of the materialist. His words are unsettling, diagnosing the pursuit of riches as not merely ignoble, but the means of our undoing, positioning us at odds with God himself.

“You cannot serve two masters,” Jesus warns. “You’ll hate one and love the other, or be devoted to one and neglect the other. You cannot serve both God, and Mammon” (Matthew 6:24). ‘Mammon,’ the personification of wealth, refers not only to money, but to the whole concept of devoting oneself to the pursuit of earthly treasure.

Not only does enslavement to worldly goods become a barrier to knowing God, but it is the direct cause of much of our unhappiness, causing many to “wander from the faith and pierce themselves with many griefs” (1 Timothy 6:10).

The irony is that while the church has sanctified Christmas as a celebration of the Lord, secularism has erected a glamorous altar to Mammon right beside the manger of Christ. And let’s be honest, that humble feeding trough can’t compete with the shimmering allure of holiday discounts.

Unless, of course, we learn the truth: Joy is not made full in what we have, but in who we have.

Our greatest joy is always found in relationships — either short, meaningful encounters with a stranger in the dollar store, or deep, long-term investments with our spouses and children.

If our human relationships are the source of our deepest fulfillment, how much more can be found in a vibrant, living, interactive relationship with our creator and Lord, who formed us specifically for that purpose?

For that was what Christ came to do — to bridge the gap between God and man, that we might cross over the barrier of sin and death by the atoning sacrifice of Jesus to be fully restored in relationship to God, that our joy — and his joy — might be made complete.

So this year, my prayer is that we would run with fervor not to the endless stream of Christmas door busters, but to the outstretched arms of Jesus Christ who supplies all of our needs by the riches of his grace; and that as the treasured hymns of the faith pour from our radios this month, our hearts would respond by praising God for fulfilling his promise that on one holy night, Emmanuel would come to save us all from Satan’s power when we had gone astray.

What tidings of comfort and joy!