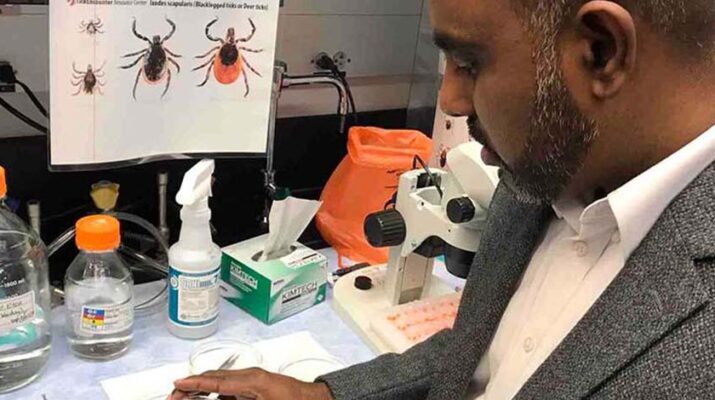 Despite the lingering cold temperatures and the ever-present chance of more snow, tick season is officially here.

Upstate Medical University’s Saravanan Thangamani, Ph.D., professor of microbiology and immunology, says ticks behave just like people do. They emerge when the sun is out, and the weather is warm and dry.

And the few warm days CNY has experienced lately have been enough. But despite the mostly cold temperatures, for the week of March 14 to March 21, he said the Upstate Tick Testing laboratory had received 176 tick submissions.

He said given the weather, that’s a lot for this time of year.

“That’s a sign of things to happen,” said Thangamani, director of the SUNY Center for Vector-Borne Diseases. “We are anticipating a real uptick in the number of ticks submitted to our lab. This is going to be a huge year for the ticks. Technically every year is a huge year for the ticks, but we are seeing a gradual increase in the number of ticks humans encounter and submit to the lab. This trend will continue.”

The community-engaged tick surveillance program, started by Thangamani in 2019, relies on the general public to become citizen scientists and submit to the lab ticks they find on themselves, on their pets or in their yards. The project helps the lab track tick hot spots and the prevalence of tick-borne diseases across the state.

With the data collected through this program, Thangamani and his team created a tick map to track the emergence of ticks and tick-borne disease-causing agents in New York state. Since the map’s inception, the lab has tested more than 17,000 ticks, identified 15 different tick species present in the state and the presence of six pathogens. More than 30% have tested positive for Lyme disease.

From January to June 2020, the lab tested 2,021 ticks. From the same time frame in 2021, it tested 5,005. In that time, the number of ticks carrying Anaplasma phagocytophilium (causative agent of Anaplasmosis) more than doubled from about 4% to 8.7% and ticks carrying Babesia microti (causative agent of babesiosis) tripled from 5 to 15 percent. Both diseases are rare but can be fatal if not treated early.

In addition, in that same time frame, the number of ticks carrying Lyme disease increased to almost 33%.

The Heartland virus has been in the news lately because ticks carrying it have been found in six states. It is carried by lone star ticks, which are historically found in southern states, but are making their way north. A cluster was recently found on Long Island. This virus is also rare but can be fatal.

For the next five years, Thangamani’s lab will continue to study environmental and ecological factors, including climate change, and how they influence the spread of ticks and disease-causing agents.

Thangamani said ticks don’t die in the winter, they go into dormancy around 35 degrees and hide in perfectly formed igloos under leaf litter. As soon as the frozen ground thaws and the ground temperature reaches 45 degrees, ticks will begin to emerge and seek a host for a blood feeding. And if the weather gets bad again, they seek shelter, but they don’t disappear.

Thangamani said there are several important things people can do to minimize their risk of tick bites and infections.

First, apply tick repellent to your skin and clothing, especially your shoes and socks. Wear long pants and pull your socks over your pant leg. When you’re out, stay on the trail.

When you come home, make sure you do a thorough tick check, focusing on your thighs, groin area and the back of your head. Then shower. Also, put the clothing you wore outside in the dryer at high heat for 10 minutes to kill any ticks that may be hiding. Deer ticks are commonly found on the thighs and groin, while dog ticks are most commonly found on the head.

Thangamani urges the public to submit the tick and accompanying information to https://nyticks.org.

“When the public encounters a tick, we encourage them to complete the tick submission form at nyticks.org,” he said.