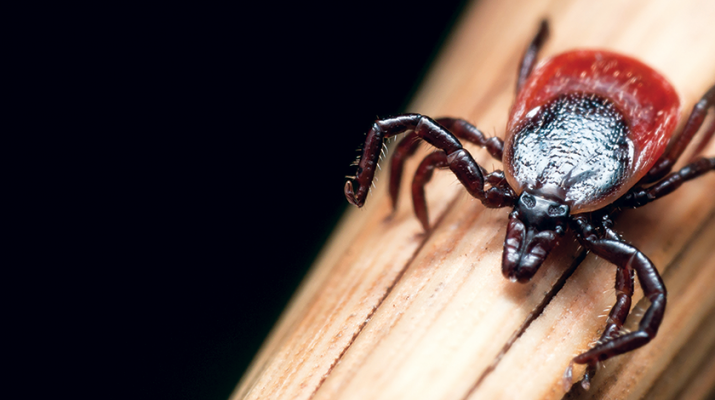 Prepare for the worst!

The prevalence of Lyme disease and other tick-borne illnesses has increased steadily over the past few years, and this year is gearing up to follow that trend.

Between 2004 and 2016, diagnosed Lyme cases went from approximately 19,000 to 36,000 per year, according to the Centers for Disease Control. That’s an 80 percent increase. The center estimates that 10 times as many cases either go unreported or misdiagnosed, making the actual number upwards of 300,000 cases per year.

The local area, like the rest of the state, has seen an increase in tick populations, and therefore a surge of the sicknesses those insects carry. Many North Country residents have had to battle Lyme disease in recent years.

Remsen resident and SUNY Poly student Ryan Polce was bitten by a tick while in the Adirondacks.

“I felt the symptoms about two weeks after the bite,” he said. “It included my joints shutting down almost completely and an insane amount of pain. I couldn’t lift my arms above my head and could not get out of bed without a struggle.”

According to the CDC, Lyme disease is caused by the bacterium Borrelia burgdorferi and is transferred to humans through the bite of infected black-legged ticks, also known as deer ticks. These ticks are the type common in Central New York.

Ticks can also carry other pathogens, and people can be “co-infected” with more than one tick-borne illness. Different kinds of tick-borne diseases include the Powassan virus, anaplasmosis, babesiosis, and ehrlichiosis, among others.

There are three stages of Lyme. After being bitten, sometimes symptoms show up shortly after, which is early stage Lyme. Symptoms at this stage are often flu-like, according to Mohawk Valley Health System Family Nurse Practitioner Briana Button, who works in the Boonville office. She said early symptoms include fever, chills, headache, fatigue, swollen lymph nodes, sore throat, and rash.

The next stage is early disseminated Lyme, which occurs up to 30 days after being bitten by an infected tick. At this point, Lyme often presents itself as flu-like, but with additional indicators, including pain, weakness, numbness, visual changes, chest pains, heart palpitations, rash, and facial paralysis.

At times, it can take years for symptoms to surface, which is labeled late disseminated Lyme. This was the case for Meaghan Cooley of Remsen. After she was bitten, she did not develop a fever or related symptoms, so doctors said she was in the clear. Three years later, symptoms presented.

“She would complain of achy joints, then out of nowhere she started getting circular rashes all over her body,” Meaghan’s mother Wendy Cooley said. “I took her to urgent care, but they said it was bug bites. As a nurse, I had already viewed the CDC page and it showed pictures of atypical Lyme rashes. So the next day I took her to her doctor.”

“She felt worse for the three weeks of treatment and about three months after, and then slowly better,” Cooley said. “Finally after about six months, I think it’s pretty resolved.”

“When you’re outdoors, check for ticks every couple of hours,” she said. “Wearing tick repellant with DEET is definitely helpful. If you don’t want to use DEET, a combination of lemon oil and eucalyptus oil can be used, and this mixture is also safe for pets and small children.”

N, N-Diethyl-meta-toluamide, also called DEET or diethyltoluamide, is the most common active ingredient in insect repellents.

Button said ticks cannot jump or fly, so they grab onto a host when it passes by. The ticks then attach to the skin and become engorged as they feed on the host’s blood.

The increase in tick population has been linked to an increase in carrier populations, reforestation, and overall warmer seasonal temperatures. More people are moving to and living in areas closer to deer and mice, which are the dominant vessels for ticks. The increased temperatures and milder winters are bringing people outside more, thus increasing exposure to ticks and the diseases they transmit. Even this past winter’s substantial snowfall contributed to the preservation of tick populations.

“People are probably thinking that because this winter was really long and really cold that this tick season isn’t going to be so bad, but that’s not going to be the case at all,” Button said. “The heavy snow is actually a good insulator for ticks, so it’s going to be just as bad, or not any better.”