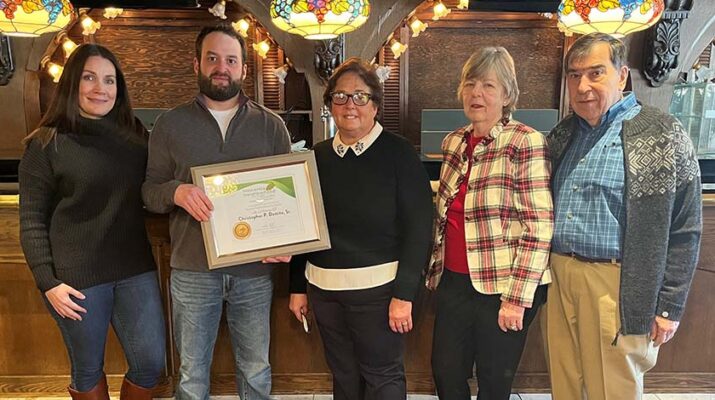 On the 12th anniversary of his death, Chris Destito’s family members made a memorial donation toward the renovations of the event and conference center at the upcoming Nascentia Neighborhood at the Beeches in Rome.

The tavern will be named in memory of Chris Destito. Contributing to the donation include Mr. Destito’s wife, RoAnn Destito, the recently retired NYS Commissioner of General Services; son Christopher Destito Jr. and his fiancé Jennifer Calandra; his brothers Frank Destito and Orlando Destito; and sister and brother-in-law Daphne and Bill Miklovic.

Destito was a partner in his family’s businesses, the former Beeches Restaurant and Conference Center, The Inn at the Beeches, and the Savoy Restaurant.  He was involved in many community organizations until his Jan. 21, 2010 death.  RoAnn shared that he was one of the founders of the Honor America Days and Mohawk Valley EDGE.

Nascentia Health purchased the former Beeches in April 2021 and have announced their plans to renovate with the help of professionals from Zerorez and transform the 52-acre property to an “aging-in-place” community, while continuing to provide a conference center as an events venue to the public.

“Chris would be very supportive of the fact that Nascentia is really impacting the community,” RoAnn said, “He loved the community and was very much in support of the people of Rome. Economic development, tourism and hospitality are all part of my husband’s legacy.”

Nascentia President and CEO, Kate Rolf, expressed her appreciation for the donation and support that the Destito damily has provided to the Nascentia Neighborhood at The Beeches project. The proposed renovation plans will modernize the property to better meet the rapidly changing and often unmet needs of the aging adult population in the greater Rome area while preserving its history that the local community fondly remembers.

The conference center is anticipated to open for hosting private and public events in 2023.

Featured image: From left are Jennifer Calandra, Christopher Destito Jr., RoAnn Destito, Daphne and Bill Miklovic. The family has made a donation to Nascentia Health toward the the renovations of the event and conference center at the upcoming Nascentia Neighborhood at the Beeches in Rome.