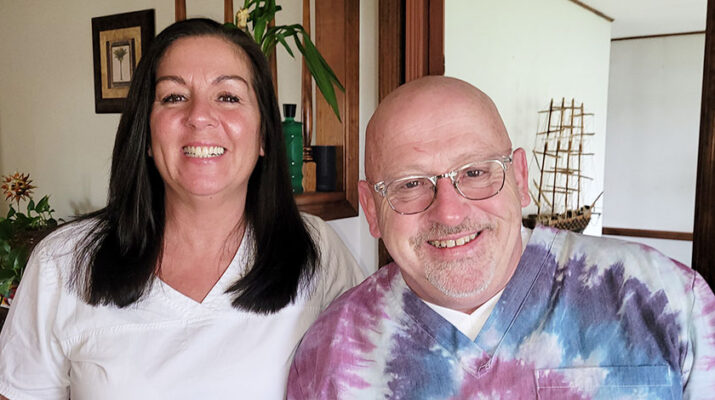 They each took separate paths to the same career

Mental illnesses are devastating disorders and they might arguably be some of the most challenging to treat for many reasons. They can be tough to detect, the associated stigma prevents some people from seeking help and the path to recovery is not always clear and uniform.

Ann became a registered nurse after graduating from St. Elizabeth’s College of Nursing in 2006. She worked as an LPN prior to that. Working as a psychiatric nurse was her goal.

“Psychiatry is where I thrive,” Ann said. “It’s the place I feel like I can give the most and make it matter.”

Although they both eventually found their way into psychiatric nursing, their paths getting there were not parallel.

Ann always envisioned a career in nursing. Her natural inclinations toward empathy and problem-solving make her well-suited for it. For James, nursing is a second career. He had worked previously as a chef in an upscale restaurant, a career he liked, but the restaurant closed and he made a decision to enter the medical field.

He remembers a devastating incident that occurred long before he chose to become a nurse that guides the care he gives now. He was visiting his mother in the hospital, at the end of her terminal illness shortly before she died when he discovered that one of her caregivers had robbed her wedding band off her finger and broke her hand in the process.

“I remember thinking to myself that people deserve better care than that,” he said. “That always stuck in the back of my mind.”

Nurses are charged with delivering care in people’s most vulnerable moments, a responsibility that these two nurses do not take lightly.

“It could always be someone I love,” Ann said. “I try to deliver the same care I would expect to be delivered to someone that is special to me.”

There have been people who have challenged them during their careers, who pushed them to be better nurses. For James, one person in particular was Erin Abrams at Mohawk Valley Health System.

“After my wife and my mom who both inspired me to care for people, I ran across some really great people along the way,” he said. “Many people have been helpful, but specific people like Erin have been especially helpful.”

Mental health diagnoses are sometimes not well understood and often stigmatized. Both Ann and James have witnessed this in their careers.

“If you have cancer, you are going to be on the cancer floor with people around you, you’re going to get flowers, visitors, phone calls and support,” he said. “In contrast, we have patients for three months at a time that see no one. They have burned every bridge that they have. Their families have given up on them. They have nobody. When they come in, they seek that connection. Many times they have never been dealt with in a fair, trusting way. The system has pushed them around. Their family is gone. A lot of times we are the bridge that doesn’t burn.”

Photo: Both Ann Flood and her husband James Flood work as psychiatric nurses.