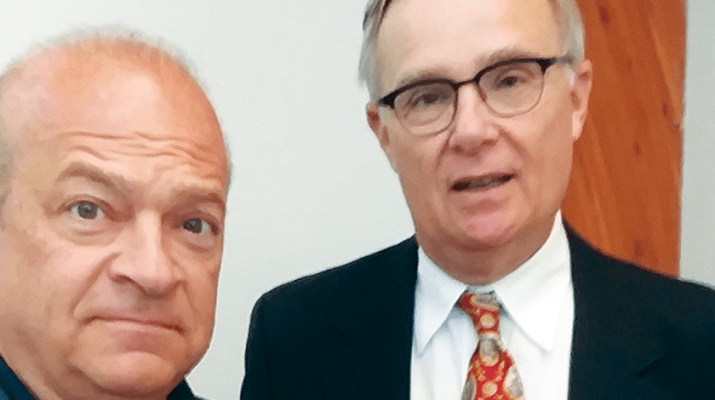 Reed was diagnosed with prostate cancer last year, and Keeler had colon cancer.

The two of them worked hard and got all the treatment they could to win the fight, and fortunately they did and are now cancer-free.

“When I first heard the word cancer, it was devastating to me,” Reed said. “When you hear that word with your name, it takes your mind a little while to catch up to it because it supposed to only happen to other people.

“Well, I guess that day I was the other people.  This happens every day, and you got to go into it with hope and faith, and I’m fortunate now to be cancer free.”

Despite the great news, Keeler and Reed both said they could have avoided getting this disease by scheduling a cancer screening or colonoscopy ahead of time.

“Our experience of going through the fears and nightmare of cancer could have been avoided had I been tested earlier,” Keeler said. “Had I gotten a colonoscopy earlier, the doctors would have caught it before it became cancerous.”

The two of them cannot change their past, but they could try to persuade others to take these sorts of cancer tests and stay one step ahead from this deadly disease.

Reed and Keeler together started a campaign to encourage men to get tested called “Real Men Get Tested,” and they later partnered with the Community Foundation of Herkimer and Oneida Counties to try to get their message out their on billboards and during TV commercial breaks. This campaign is in progress right now, and is expected to end June 21, 2020.

“I read an article talking about why men don’t get tested,” Reed said. “It kind of shocked me to think that men are just really poor with going to get tested in regards to dealing with things like cancer. That was my inspiration to get this thing started. We’re the ones to kind of nudge guys and say, ‘hey listen, this is an important thing.’ It’s much easier to deal with a cancer diagnosis if it’s caught early rather than later.”

The Community Foundation is a charitable nonprofit entity that has been around since 1952, according to Nick Grimmer, the foundation’s director of giving strategies. They work with many different individuals, families, businesses and nonprofit organizations to deliver the group’s message and set up charitable projects.

Grimmer has known Reed for years and was willing to help him and Keller spread their message across the valley.

“About three months ago, Tim Reed came in, and we’re very close with Mr. Reed, and he was just throwing ideas to me about what he could do to spread the word,” Grimmer said. “We met a few times and talked about setting up a project underneath the Community Foundation’s umbrella, and that’s how the ‘Real Men Get Tested’ project was developed.”

The foundation is in the early stages of the project, which is advertising. Grimmer said the group plans to air a few commercials related to this issue.

Reed and Keeler’s message will be up on billboards and inside the pages of newspapers, and there will also be a website which gives out all the information on the campaign.

“This is done under the Community Foundation’s brand,” Grimmer said. “It’s 100 percent charitable, so nobody is getting paid to run this campaign.  It’s all volunteer-driven.”

Reed himself put in $25,000 to get this project off the ground. “It’s not meant to encourage them to go to any specific health provider, and it’s not encouraging men to do anything other than simply getting tested, period,” he said.

Reed has always been an advocate of the Community Foundation, but the main reason why he joined Keeler to ask the foundation for help was to avoid starting another nonprofit group from scratch and competing with the hundreds of other charitable organizations for ad time or space.

“We did not want to set up another nonprofit organization,” Reed said. “There’s probably too many of these organizations in this community.  What we’d rather do is go under the umbrella of the Community Foundation and have them handle the money and acknowledgements. It’s an opportunity to use them at what they do best.”

These cancer tests are time consuming and uncomfortable, according to Grimmer, but early detections of cancer could save a person’s life.

“The earlier that they can get tested, the more time they have to spend with their families,” Grimmer said. “It is just encouraging men to get over any worries for getting tested. It’s not a fun process, but don’t be stubborn. Do this for your family or loved ones.”