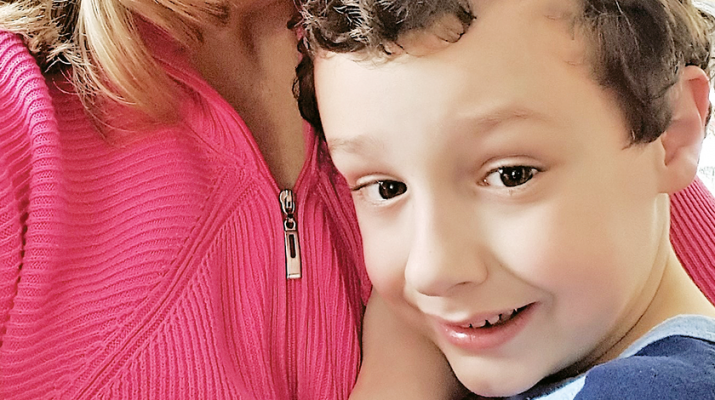 Kayci Visalli’s recently published children’s book,  “And He Sneezed Again!” is a hit on Amazon.com.

Written as a way for the Utica grandmother to get through to her grandson who was diagnosed on the autism spectrum, the book is quirky and fun for all kids, not just those with autism.

“I raised my grandson Isaiah from birth,” she explained. “He was born with special needs; there was lots wrong with him. He wasn’t walking, wasn’t talking.”

“It’s been quite challenging,” she summed up.

Developing a connection with a child with autism is usually quite difficult and Visalli found this true with Isaiah.

She found it impossible to “break through to him, to get a hold of him, to reach him.” She needed to connect with him so that he could start learning.

When trying ways to connect with him, she noticed that he responded to rhythm, especially drum rhythm. “He loved it. He would ‘play’ the couch at age 3,” she said.

That was her breakthrough moment. She tried reading to him in rhythms and he responded. “I would read slow; I would read fast. He loved it! We finally began to connect,” she said. He responded to the rhythm of words.

And he began to make progress, good progress.

“Now he’s doing excellent!” she said. “He’s in kindergarten, and is transitioning to a normal class. He walks fine, talks well, and is bright, funny and witty. He still struggles with things, like smiling — that doesn’t come naturally to him.”

“Lovable little Hilbert Henry Higginbot wakes up one morning with a sneeze, then another, and another,” the book begins. “Hilbert doesn’t like sneezing, not one little bit, and he’s willing to try anything to get rid of them! When there’s no relief in sight, Hilbert calls the only person he can think of to help. But, boy, does he get more help than he bargained for!”

The beat goes on

“This quirky tale is a fun book for both listeners and readers!” claims Amazon.com. “In rhyming and metered verse, ‘And He Sneezed Again!’ was written to amuse and engage the author’s grandson diagnosed with autism spectrum disorder. Because he responded positively to instrumental music, this grandmother-turned-author penned the story lines to simulate percussion rhythms in a creative effort to promote a love for reading and stimulate language development.”

Reviews are overwhelmingly positive, ranking Visalli’s book five stars out of five on Amazon.com, and 4.33 on Goodreads.

“Great children’s book!” remarked Sarah Cifonelli online. “Used this in my K-2 special education classroom and it was a hit. This book is captivating and very easy for children to follow. It can be read in a short period of time and doesn’t lose the audience’s attention.”

“Wonderful children’s story!” said another online. “My grandchildren loved it! I’m sure we will be reading it over and over! Thanks for the fun!”

Abby Leighton’s appealing illustrations on the cover and inside add to the book’s appeal. “Looking for an artist, I jumped onto Craigslist and was able to find a student at the Pratt Art Institute,” said Visalli. “I was so pleased to find her.”

Visalli, from Indiana, has long been a writer of poetry and stories. This is her first book.

Her life changed dramatically when Isaiah came into her life and she became a full-time mother. She had a career in mental health, working for the county.

“I loved my job; I did lots of good stuff,” she explained. “If a person has mental health challenges, I worked with them, put them in safe houses, and helped their lives improve.”

Then her daughter, Isaiah’s mother, was diagnosed with a terminal illness and in hospice. Through a miracle, she recovered.

Though she was told she could never have children, she gave birth to Isaiah and his younger sister. As she was unable to care for Isaiah, he came to live with his grandparents. Visalli quit her job to care for him, and now is bringing up his 2-year-old sister.

“My days are totally different now,” she said. “I put the same toys away six times a day. I still diaper the same end; that’s the only thing the same,” she laughed.

For more information or to purchase Visalli’s book, “And He Sneezed Again!” go to Amazon.com.