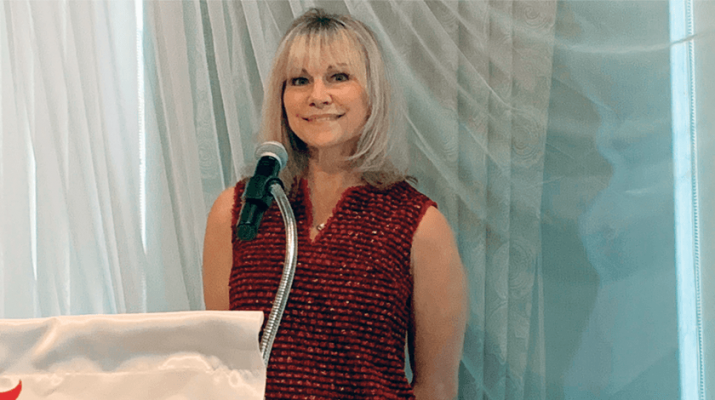 Jennifer Keida runs day-to-day operations for the Standard Insulating Company in Marcy, and she also holds board positions for a few national and local organizations.

But the one group that Keida heavily invests in is the American Heart Association’s Go Red for Women campaign.

Go Red, according to goredforwomen.org, is a national movement to raise awareness of heart disease. A majority of the group is made up of heart disease and stroke survivors.

Keida lost her grandmother from this disease and has a weak heart. So she joined this group as a way to honor her grandmother and figure out how to keep her heart healthy.

“I got involved because I actually had a heart issue myself,” Keida said. “It’s a genetic issue, so it’s not associated with exercise and food. But because my heart is weaker than most hearts, I pay more attention to it than a normal woman would. So I got involved because of my heart issue that I had, and my grandmother recently passed away from heart disease, and seeing the people that it affects around me made it be my No. 1 push in the community.”

Keida is the campaign chairwoman for the group. Each year, Keida and the rest of the Go Red members try to empower other women and educate them on heart disease through social media and at many events, fundraisers, and festivals throughout New York state.

Heart disease is the No. 1 cause of death for women, according to Keida, and it is just as more dangerous than any form of cancer.

But it is avoidable. Keida said heart disease and strokes are 80 percent preventable, while the other 20 percent is genetic. All women need to do is exercise regularly, eat healthy, do not smoke, and most importantly, check to see if their heart is pumping at a normal rate.

“Everyone’s overall health improves when you eat better and exercise,” Keida said. “Instead of taking the stairs, take the elevator. Add fruits and vegetables to every meal. From my years of being involved, I think for women the biggest issue is that they don’t pay attention to themselves. They can still eat right and exercise, but the biggest issue is recognizing that something is wrong, and doing something about it. Go see your doctor, and let them tell you what you need to do.”

As a way to celebrate Go Red members’ hard work and efforts in warning people about the disease, the foundation hosted a luncheon at the Harts Hill Inn in Whitesboro recently. It is the 15th year that the group has hosted this luncheon in the Mohawk Valley.

“It’s remarkable to host this luncheon in the Mohawk Valley,” Keida said. “We have people from all types of businesses and backgrounds that all come together and work really hard to outreach to as many women as possible.”

While this year’s luncheon was a celebration for Go Red and a health class, it was also a time for the survivors of heart disease and stroke to share their stories of survival.

Cheryl Murdock is one of those survivors and the guest speaker at this year’s luncheon.

Murdock lives in Arizona, but grew up in New Hartford. She discovered the symptoms of her disease when she was 11 years old.

“I was in gym class, and I was doing squat thrusts,” Murdock said. “I started feeling chest pain, got really dizzy, and I couldn’t catch my breath. Those were my symptoms.”

Murdock later found out that she had heart disease, but fortunately doctors found a heart donor for her and she had a successful transplant.

“I was standing in my dressing room when my phone rang,” Murdock said. “It was my doctor, who said these words that I will never forget: ‘We have a heart for you, and I really hope you’ll come in because it is a very good heart.’”

The heart Murdock received was from a 14-year-old girl named Morgan Gallegos. Murdock had the chance meet Gallegos’ family in person last year in San Francisco and learn a little more about the donor’s hobbies.

“I had written my thank you letter,” Murdock said, “and I responded to them with the address they gave me. I also got an email address from them, and her (Morgan’s) father and I started an email correspondence through the years, and it just so happened that last year we actually met.

“ They told me all about their daughter, and I told them how I got her heart. I could not thank them enough for meeting me and giving me my future.”