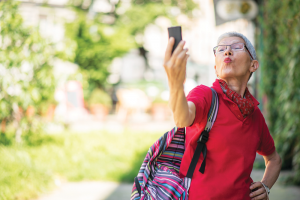 I can’t look at my granddaughter’s Facebook page! It makes my stomach turn and my skin crawl! It scares me!

It’s unsettling to see the sultry, seductive, provocative face that her Facebook page reflects. That’s not the sweet, shy, innocent 15 year old, the girl I know and love. Her Facebook page is a girl heading into perilous territory without a clue about where she’s going.

So I don’t look at her Facebook, ever. And I don’t think she looks at my Facebook page. It probably doesn’t reflect the grandma she knows.

Here’s the big secret uncovered by a recent survey: Many grandkids secretly want to un-friend their grandparents — as many as 54% have thought this.

In our world today, where teens and young adults have moved past phones to communicate, text messages and Facebook postings make that the preferred way to keep up with grandkids. Social-network sites, such as Facebook, are changing the way we interact with one another, with our kids and grandkids.

Facebook has pros and cons for grandparents. It makes staying connected with grandkids a snap, especially for those who live at a distance. For a much easier way to get in touch with your love ones, you can get more likes and followers on sites like, consider BuyLikes.com, so they can search you right away and your name will pop-up on top. It’s simple enough that those who aren’t tech savvy can handle it. Still, these interactions come with some hazards.

The national survey, conducted by Visiting Angels, which provides in-home support to seniors, found that as many as half of teens wish someone would sit down and show their grandparents how and when to use Facebook.

The survey found most grandkids do enjoy having you on Facebook, but some secretly want to un-friend you because you post stuff that’s embarrassing.

Here’s what the survey uncovered from teens as the top Facebook no-nos for their grandparents:

— Don’t post too much personal stuff: One in four teens who were surveyed said their grandparents post TMI (too much information) about their love life, social life, or sex life. More than one in three said Grandma or Grandpa post dirty laundry about family feuds, and that’s not OK.

You may have a lot of medical issues that may interest your friends, but your grandchildren will be totally grossed out by hearing about Grandpa’s prostate exam or Grandma’s colonoscopy. The only thing worse is reading about their grandparents’ romantic interludes. Yes, they should know that romance is possible in the grandparenting set, but posting on Facebook is not the way to tell them.

Generally, kids like having their grandparents as Facebook friends, but “Please, Granny: NO posts about your love life!”

Trying too hard to be too cool 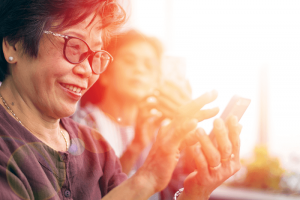 — Don’t rant and rave: Some grandkids say Grammy goes “emoji crazy” in comments or posts. And many don’t like it when grandparents get too political or too religious. One boy said he wants to hide when a grandparent COMMENTS IN ALL CAPS.

— Don’t tread on their personal turf: It’s not cool to try to friend their friends, or for you to post personal comments on their timeline. Additionally, do not post comments on their social life or their appearance. Said one young woman: “Every status that is posted, every picture that is uploaded, will be commented on by my grandma. It is mortifying. So very mortifying.”

— Don’t try to be cool: And don’t use their jargon. (Like LOL or IDK). Most teens prefer that grandparents talk, write, and post like a grandparent, not like their friends. That means not only avoiding “text speak,” but also using proper grammar, spelling and punctuation.

— Don’t spread doom, gloom, or guilt: Grandkids do not like to see a grandparent post that he or she is lonely, unhappy, sick or sad. They don’t like to see comments about grandparent’s health, medical issues or procedures. And they don’t want to feel guilty when Grandma posts: “Why don’t you come over or call more?”

Also, be aware that posting personal information, no matter how innocuous appearing, can expose you and their friends and family to crime. For example, some despicable people have used bits of personal information gleaned from social media to run the grandparent scam. Also, burglars may target those whose posts indicate that they are not at home.

The best rule is not to post information about where you’ve been until you’re back. Is that confusing? Burglars will be confused, too.

— Posting unflattering photos: This is the worst Facebook offense in the eyes of grandchildren, and your adult children won’t appreciate it either. You may believe that all of the photos you take of them are masterworks, but they may not see it that way. A hundred of their friends will see it and they’ll be mortified.

And yes, I do intend to have a face-to-face chat with my granddaughter about the risks that a naïve 15-year-old girl is facing.