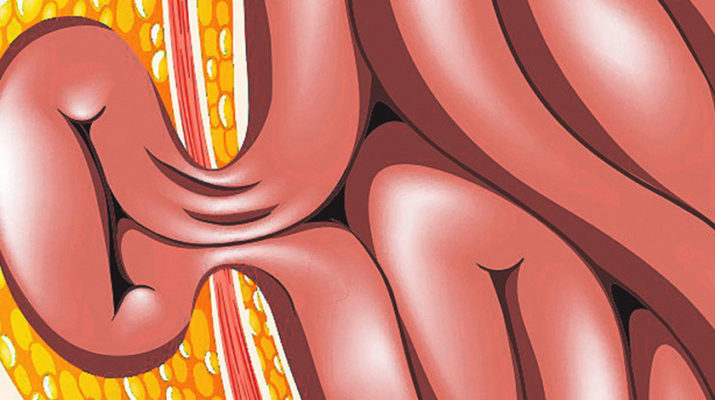 There are many ideas flying around out there about hernias.

Ideas like, “only men get hernias, you only get hernias from lifting heavy things, hernias aren’t that big a deal and can be ignored.” Ideas like, “hernias involve a long, painful recovery process, don’t get mesh because mesh will fail.” But are all these ideas true?

A hernia is a weakening or tear in the muscle of the abdominal wall, through which a portion of intestines begins to push out under the skin, said board-certified general surgeon Keneth Hall, who performs numerous hernia surgeries at Rome Memorial Hospital. Roughly 5 million people in the United States develop a hernia every year.

There exist four types of hernia depending on the location they occur within the abdomen. Femoral hernias occur very low in the groin area and are uncommon, usually occurring in older women, Hall said. They also tend to involve more complications and need to be dealt with quickly, he said.

Umbilical hernias happen in or around the belly button and are the most common. Umbilical hernias can happen through straining, either from heavy lifting or prolonged and forceful coughing, and can also result from pregnancy.

Incisional hernias occur at the site of a previous surgical procedure, near the incision. As its name suggests, such a hernia is only a risk to those who have had some sort of abdominal surgery in the past.

Hiatal hernias differ from the rest in that they occur within the body and do not involve intestines. A hiatal hernia results from a weakening of or injury to the diaphragm, which then allows a bit of the patient’s stomach to extend up through the diaphragm. Hiatal hernias are not visible from the outside, but generally involve symptoms such as heartburn and acid reflux, and trouble swallowing. Smoking, chronic coughing, constipation and being overweight increase the risk of a hiatal hernia.

“It will never go away,” he said. “It might not get worse. It might be years. But it could get worse and become critical. There’s no way of telling when the hernia will become symptomatic or problematic. So, generally, the sooner you address it, the better.”

Often, when a hernia first appears, the patient will notice it as a small lump that can be easily pushed back into the abdomen and may disappear when the patient lies down. This is referred to as a reducible hernia, Hall explained. At this point, rather than actual intestine poking out through the muscles, it is the fatty tissue between intestine and skin.

Point of no return

The next stage is referred to as an incarcerated hernia. At this point, a patient cannot push the lump back in and it does not disappear upon lying down. When a hernia reaches incarceration, a section of intestine is looped outside the abdominal wall, and directly under the skin, Hall said. At this point, it becomes more important to get the hernia taken care of.

Finally, if the hernia site becomes red, painful and hot to the touch, it is called strangulated and is at a critical level that requires immediate attention. Left untreated, a strangulated hernia is deadly.

Advances in hernia surgery have come a long way in the past 20 and even 10 years, and continue to be made. Most hernia cases can be fixed using laparoscopic surgery, Hall said. Laparoscopic surgery involves a series of very small incisions through which the surgeon inserts a camera and the necessary implements to repair the hernia, rather than the former way of repairing a hernia that involved slicing a section of the abdomen open, Hall explained.

Laparoscopy involves less bleeding and a reduced risk of infection. The surgery itself, on a standard umbilical hernia, can take as little as 15 minutes. On one occasion, with a very involved femoral hernia that a patient let go for years, the surgery took about 90 minutes, Hall said. But that situation is uncommon. And with laparoscopic surgery, recovery is quicker and far less painful than the traditional idea of hernia repair recovery, he noted.

While some patients are uncomfortable with the idea of using mesh in their hernia repair, thanks in part to law office commercials touting settlements for mesh failures, Hall asserts mesh is the best option for repair.

“The tissues after surgery are much weaker,” he explained. “At best, the abdominal wall strength will be at 80 percent. If you don’t use mesh, there is a high instance of recurrence.”

The surgical science community has made improvements on the mesh used to repair hernias as well.