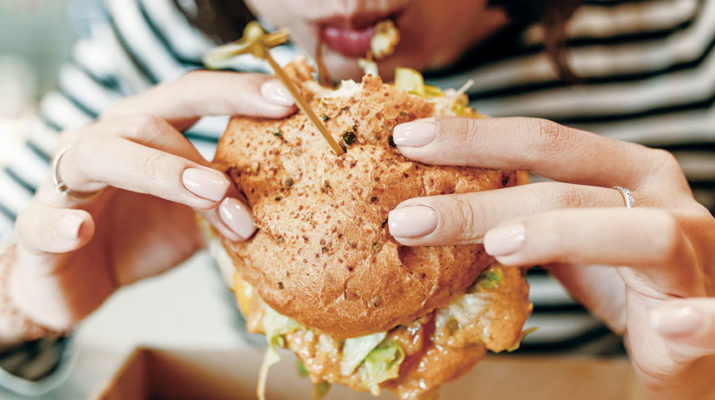 Of course you know that eating a bowl of ice cream before bed will wreck your efforts to lose weight.

Many of us crave junk food in the evening — a sweet, carbohydrate-rich treat. Even after we’ve been content with yogurt for breakfast and salad for lunch, a big bowl of ice cream or chips can become pretty appealing once we’re vegging out after a hectic day.

When we eat before bed, our body is likely to store those calories and we gain weight.

Also, those in the study also felt bloated in the morning, but didn’t associate it with their after-dinner eating. It had a negative impact on their blood sugar and cholesterol levels.

But there’s more to it. Even if you pick wholesome food in small portions, eating late makes it harder to lose weight.

“It’s important to stop eating three to four hours before you go to sleep,” Baldwin said. While you sleep, your body does all the repair work it needs to do. If there’s food in your stomach, your body can’t effectively do this repair work while it’s working to digest food. This weakens your digestive system.

“Going to bed with food undigested in your stomach interferes with your body’s ability to fall asleep,” she added. “Your blood sugar will spike; it causes insulin resistance, and can even led to diabetes.”

“To lose weight, eat an early dinner, then don’t eat before you go to bed,” she suggested. “The results will be significant.

“If you feel like you’re hungry after dinner, you may just be thirsty. Drink a glass of water instead, then wait and see if you still feel hungry. We often identify thirst as hunger.”

“Exciting new discoveries about the timers within our cells — trillions of them, priming our bodies to work efficiently — are transforming health care,” said Dr. Oz, star of “The Dr. Oz Show,” in Parade Magazine. Using time to prevent disease and treat it is among the biggest medical breakthroughs he has seen since launching his show. “We haven’t just underestimated time, we’ve completely ignored its role. We’re starting to see that the when can be just as important.”

If you practice intermittent fasting, or deliberately timing your meals, the window of time during which you consume food should be a six-to-eight hour window, said Baldwin. Start with 10 hours then work up to six to eight.

All of your intake of calories — meals, snacks and beverages — takes place within that window. Instead of reducing the calories you take in each day, or limiting the types of food you eat, it’s the timeframe in which calories are consumed that is important.

This isn’t a weight-loss program as such. Studies found that weight loss happened as a side effect.

The reasons why aren’t fully clear, but it could have to do with our circadian rhythms — the biological clock that tells the body to be awake during the day and to feel sleepy at night. We’re meant to be eating during the day and fasting at night. It seems that our bodies are primed to process food most efficiently when it’s eaten during daylight hours.

Our bodies do best when we live in sync with our circadian rhythms. Our bodies digest and metabolize food best earlier in the day, not later.

“The rule of thumb is eat like a king at breakfast, a prince at lunch, and a pauper at dinner,” explained Baldwin. “But the norm for most people is the opposite. This is counterproductive for your health.

“Ideally, your biggest meal should be the first meal of the day, your smallest meal at the end of the window.  Confine your eating to between the hours of 10 a.m. to 6 p.m. Then only consume water until you go to bed.”

Some experts call it night fasting. Night fasting is simple. In one study, participants ate dinner as early as 6 p.m. and definitely by 8 p.m., and did not eat again until 8 a.m., for at least 12 hours of fasting. Not even a cup of coffee during that time.

They didn’t have to change what they ate or how they cooked. As well as weight loss, they had significantly lower blood sugar and lower risk for cancer, as opposed to the group who did not night fast.

Other studies have found night fasting could be the key to longevity, could ward off Alzheimer’s and Parkinson’s disease and improve memory and mood, as well has helping cholesterol levels and preventing diabetes.