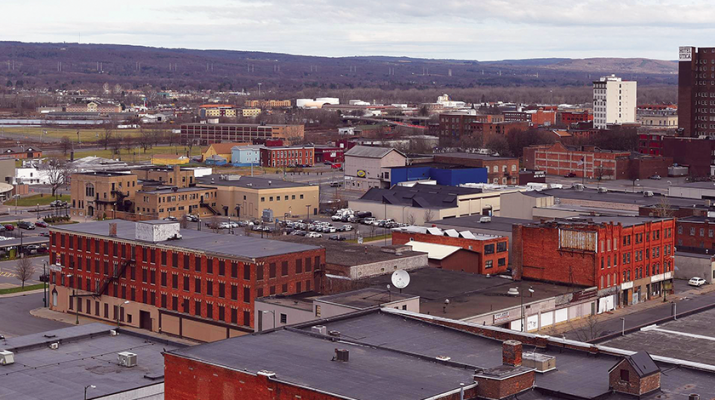 The nine-story, 670,000 square-foot, state-of-the-art new downtown hospital proposed by the Mohawk Valley Health System in Utica is not a done deal — yet.

State and local officials have expressed both support and dismay at what is shaping up to be a massive renewal project. One thing for sure: Controversy is alive and well as the debate continues.

Grandiloquence about the hospital hangs heavy in the air, while hyperbole versus truth accents the debate on where the most advantageous site for the hospital should be.

Local residents have expressed fear and concern about a development of this size and have been vocal on social media and in the mainstream media.

Take for example the issue of eminent domain. A number of businesses in the proposed downtown location would face eminent domain. It is defined as “the right of a government or its agent to expropriate private property for public use, with payment of compensation.”

“Some business owners believe no amount of money would be suitable compensation for their property. Emotional attachment to a family business that has been passed through a number of generations is viewed as priceless.

Mohawk Valley In Good Health newspaper conducted a survey asking local residents — ranging from business owners to college students — what their views are on the new hospital.

— Ericka, a Utica resident and student: “I think in theory having a new hospital in downtown Utica is a good thing. However, I do have some concerns. On the positive side for example, I feel it gives people with a lower economic status easier access to health care just by the nature of the downtown location.

“I do have some concerns regarding logistics. People and ambulances moving through an already congested area, particularly when there are events for instance, when the Stanley (Performing Arts Center) has performances, or the auditorium (Adirondack Bank Center) has a hockey game or other event. I live very near to the area that is being proposed. Sometimes the congestion is so bad I have a hard time getting around.

“What about people entering and exiting the hospital, as well as ambulances moving through a congested traffic pattern?”

— Anne, a Utica resident and a local business owner: “I think it is a good idea; we need a state-of-the-art health facility. I really don’t want to go to Syracuse or Rochester, for example, to have a special procedure done, for myself or anyone else in my family. I also think it will bring in better doctors. It might be a draw for people to relocate to this area.

“This could only help our economic environment as those people would need to buy a home, a car, eat at local restaurants and so forth. Having it located in downtown Utica, I am not positive if that is the best area. It might be, but I am unsure. I just know we need a new state-of-the-art hospital.”

— Doug, a New Hartford resident and employee benefits adviser: “I think on the flip side we need an updated facility as long as we can bring in new talent, such as new doctors and other health care professionals. However, because of the congested area, I have some concerns, particularly if there happens to be a disaster.

“Just one example: CSX runs trains every day through the city. What if there was a derailment of toxic chemicals and the entire area had to be closed down? How would that affect the hospital being so close to the rail system?

“Perhaps having a smaller clinic in downtown and then putting the larger facility in another area might make better sense . It also would eliminate the need to demolish any existing businesses.”

— Jim, a Herkimer resident and retired financial adviser: “I feel that this might be the last chance for any true revitalization of the city. The hospital being placed in downtown is strategically located for access with the Thruway and Route 5 nearby, and of course the arterial being close as well.

“We obviously need a more modern facility. I also think it will be a major boost to the economy.”

— Scott Truett, a Utica resident and business owner: “My brother (Brett) and I are adamantly opposed to having the hospital in downtown Utica. It would be more cost-effective to build on the existing St. Luke’s (Hospital) campus. Having the hospital downtown just increases congestion and puts patients and the community at risk, especially if there should happen to be any kind of rail disaster being that the trains run so close to downtown.

“Having it at St. Luke’s would also eliminate any need for eminent domain. We also feel the city has not been open and truthful about this entire project.”

— Dean, a Utica resident and LPN: “We need a new hospital, but not downtown. Use the existing land at St. Luke’s. No businesses would have to be displaced if it was located there. Downtown is too congested. Another concern I have: Will we be able to attract the high-quality skilled staff needed for the new facility regardless of its location?”