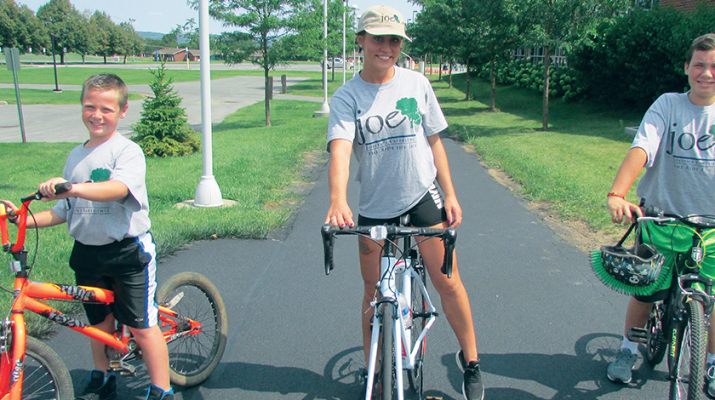 Joseph’s Experience keeps hope alive for those stricken with cancer

John Klar will never forget the phone call he received from a stranger while his wife lay terminally ill at Roswell Park Cancer Institute in Buffalo.

The “stranger,” as he described Mark Montgomery initially, asked Klar to tell him what he needed to offset the expense of traveling to Buffalo from his home in Westmoreland to comfort his wife, Debbie.

This was no joke. It came from Montgomery, the founder of Joseph’s Experience, Inc., a Mohawk Valley-based organization that assists local cancer patients and their families.

Klar graciously accepted gas cards and hotel vouchers to use in Buffalo. He also had two young boys, Jonathan, then 10, and Dominick, 6, at home, who were struggling to get through the Christmas holidays while their parents remained in Buffalo.

“They gave them Christmas presents,” he said, overwhelmed by the organization’s generosity.

Klar traveled to Buffalo throughout 2015 and spent nine months at his wife’s bedside. Debbie Hooks Klar needed a bone marrow transplant, but never received it and died of leukemia in January 2016.

Joseph’s Experience, Inc, a nonprofit founded in 2014, holds fundraisers throughout the entire year. It does not hand out cash, but offers material assistance and intangible aid, such as emotional comfort. It provides encouragement and hope to patients and families to get through their ordeal.

“It’s teaching people to live, not just exist,” Montgomery told supporters who assembled at a reception following the third annual Ride For Joe, a 15-mile bike ride-fundraiser held recently. The ride’s theme is a message to those impacted by cancer and leukemia: “You suffer alone no more.”

Klar, holding back tears, and wearing a T-shirt with his wife’s photo, told the crowd at Jorgensen Athletic Center at Mohawk Valley Community College in Utica how JE made a difference to him and how it has helped perpetuate his wife’s memory.

“It taught me how to advocate [for other cancer patients]. He gave me a voice,” he said of Montgomery. “Mark visited my wife. Imagine driving three hours to visit someone you never met before. He took us in as if we were part of his family.”

His family’s involvement with JE didn’t end with Debbie Klar’s passing. The former recipients are now enlisted in giving back to JE and passing the torch to new recipients, such as Sarah Bostick.

Bostick is in remission from leukemia and was designated honorary captain of this year’s Ride For Joe. In May, she received a free Fuji road bike, courtesy of Bikes & Boards in New Hartford and Joseph’s Experience and began training for the Ride For Joe.

Klar’s two sons and his brother-in-law, Dennis Hooks, were among the participants in the bike ride. Bostick was one of the honorees of the 2017 Ride For Joe along with Colleen Anderson, and the Corigliano and Wright families. Anderson was diagnosed in 2016 with breast cancer.

Alex Wright of Sherrill, one of the riders, spoke at the Masonic Care Community in Utica about the care his family received from JE before his 27-month-old daughter, Emma Carol, passed away after suffering from a rare form of lung cancer.

He wanted to be in the ride as a means of giving back to the organization. “It’s nice to be around other people who have gone through this,” he said.

Wright and his wife, Jane, have two other children at home, a 4-year-old daughter and a 5-month-old son, and they felt it was vital to talk about life and death with their eldest daughter.

“We had a good conversation,” he said. “We know (Emma is) in heaven and we’ll see her again. It’s interesting to walk a child through the grief process. They grieve and they’re sad, but then they’re (over it). It’s different from adults who hang onto grief longer.”

Following brief remarks by Montgomery and Wright at the Masonic campus, the Ride For Joe was joined by two guests for the final 1.75-mile stretch, designated the Community-Survivor-Active Battlers mile: Andrew Ruffino of Morris, a legally blind runner, was accompanied by a member of the Army National Guard running with a large American flag over Culver Avenue to MVCC.

Sarah Bostick, 24, and her fiance, Joshua Michael Omes, led the 30 cyclists on the 14-mile ride from the Herkimer municipal offices to the Masonic Care Community, with police escorts providing traffic support.

Bostick is a nursing student who obtained her two-year degree from MVCC and is now enrolled in the RN program at Morrisville College. At the luncheon, she talked about her difficulties in surviving leukemia.

The first challenge she faced was getting her disease diagnosed properly. Her primary care doctor at first dismissed her concerns, she recalled. As a nursing student, she went along with her hunches and research, and got confirmation of leukemia from the staff at a local urgent care center.

She later went to Roswell Park for treatment. However, her father, Rick Bostick, convinced her to consult with specialists at Dana Farber Cancer Institute in Boston. She also got support from Montgomery and Klar.

From his experience with his wife, Klar said he hopes to provide helpful advice for other cancer patients. “I know what questions she needs to ask the doctors,” said Klar.

Another honoree at the ceremony at MVCC was survivor Kathy Rogowski, who led a small team of riders in memory of her late father, Wayne Rogowski.

Judy Reilly, a new participant in the Ride For Joe, played “Amazing Grace” on the bagpipes during a ceremony at the Masonic Care Community. “Joseph’s Experience gives the families hope and increases awareness, so no one else needs to go through this,” she said. “I volunteer because I can. I’d hate not to be if I could be.”

Reilly, 52, is a member of Greater Utica Sunrise Rotary, which she noted is committed to community service. She began dedicating herself to fitness after losing 150 pounds over the past few years. She also participated in the Ride For Missing Children for the first time last May.

Twenty years ago, Frank Williams founded the 100-mile Ride For Missing Children in Utica, which raises funds to print posters of missing children nationwide. He retired from the organization five years ago. He rode in the Ride For Joe and is also lending his professional management expertise to Montgomery for an event that shares many similarities with RFMC.

Montgomery is associate dean of social sciences and public services at MVCC.

JE was named after his brother who died from cancer, although Montgomery, 54, is a cancer survivor, too.

He suffered from a form of leukemia called scarcoidosis that impacted his lungs.

“As a black belt, it is my duty to serve others before self,” Montgomery wrote in an email. “So that aligned with my desire and obligation to serve.”

On the JE website, Montgomery explains the group’s mission. He acknowledges the organizations that aim to serve children and honor those in the military, but JE serves residents in 16 counties of central New York. Whereas other service providers fill a single-event timeline, his organization provides services, activities and support throughout the year.

“After all, suffering doesn’t stop after an event, a child returns from camp, a family returns from a weekend away, or a veteran receives a hot meal,” he said.

Montgomery and Kathy Rogowski are among the cancer survivors who make up JE’s board of directors.