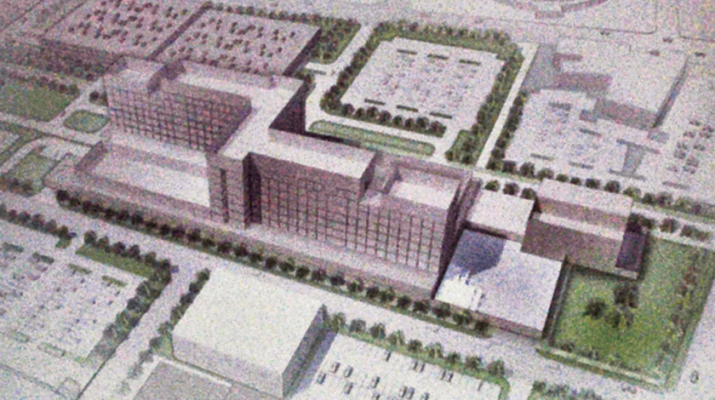 After months of intensive planning that included discussions between the MVHS outreach team and about 2,000 individuals from workgroups representing different parts of the community, MVHS officials released the designs for its integrated health care campus to an invitation-only crowd that included political, business and community leaders at the DoubleTree by Hilton Hotel Utica.

Members of the public are invited to learn more about the site plan at two community forums at 2 p.m. and 6 p.m. Dec. 7 at the Radisson Hotel-Utica Centre in Utica.

MVHS said its integrated health campus would consolidate existing resources and eliminate redundancies that stem from its current operation of two hospitals, Faxton St. Luke’s Healthcare in New Hartford and St. Elizabeth Medical Center in Utica, and having inpatient and outpatient services spread out on three campuses. It would also improve access and “elevate the quality of health care in the region, MVHS officials said.

The new hospital is projected to have 373 beds and a 1,550-car parking garage. It will be a 672,000-square-foot facility on 25 acres in lower downtown Utica, sandwiched within a five-minute walking radius between the Utica Memorial Auditorium, courthouse, police station, city hall, Hotel Utica, the Radisson Hotel and Kennedy Apartments.

The site plan showed an outline of the external building and its footprint that includes the emergency department walk-in, ambulance entry, parking garage, a central utilities plant, a service entrance, sidewalks, green spaces and surrounding streets. None of the interior design has yet been completed.

“We are excited to be able to share the site plan and outline of the new hospital and how it fits in the community,” said Scott Perra, president-CEO of MVHS. “We know that many members of our internal and external communities have been looking forward to the day when they could begin to have a vision of what the campus will look like.”

He called the new design a complex, multi-year initiative. “We are designing from the inside out, first looking at the processes to care for the patients and then designing the space to provide the care,” Perra noted.

MVHS officials said they intend to preserve the street grid as much as possible, but the plan calls for the hospital to occupy land south of Oriskany Street. The main entrance will be on Lafayette Street, and the rear or service entrance is on Columbia Street. The east border will be along Broadway and the west will extend, with green space, along State Street.

The parking garage will be located on the lower or north end of Cornelia Street at the corner of Oriskany Street, opposite the auditorium. The site map also shows a “potential” medical office building at the corner of Lafayette and Cornelia streets, surrounded by parking spaces.

Officials noted the site plan is about 30 percent complete and will be undergoing much modification. It was required to meet a 30 percent standard in order to obtain approval for its certificate of need application from the New York State Department of Health.

The exterior and interior design process will be ongoing into 2019, when groundbreaking is expected. MVHS officials hope the new hospital will be completed by 2021.

“This new hospital will transform the health care our residents receive by giving them a state-of-the-art facility, the highest level of medical technology and a team of doctors, specialists, surgeons and caregivers that will allow them to be adequately treated right here in the Mohawk Valley,” said Oneida County Executive Anthony J. Picente Jr.

One new element that was added to the plan recently was the inclusion of a new and expanded Masonic Medical Research Laboratory. MVHS and MMRL announced a memorandum of understanding and proposed affiliation last January.

The lab, which is located on the Masonic Community Home campus in east Utica, was founded in 1945. Since the 1960s, it has become world famous for its research into cardiac health, including cardiac arrhythmia, atrial fibrillation, and in more recent years, electrophysiology, molecular genetics and stem cell biology.

“This announcement brings us one step closer to a day when our researchers and MVHS clinicians will share common space that will foster collaboration and innovation,” said David Schneeweiss, MMRL board president.

The Masonic lab would cost $1.4 million, but the lab will pay for construction and sign a lease to pay for maintenance, MVHS officials said.