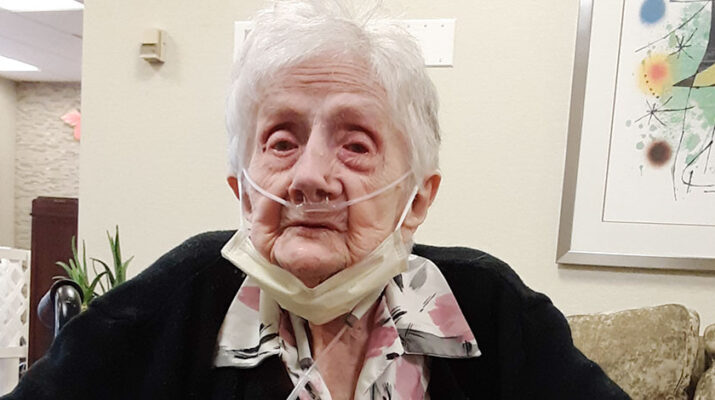 When Ellen Ball came into the world, Woodrow Wilson was president, there were 48 states in the U.S. and gasoline cost 30 cents per gallon. World War I ended less than six months prior and the Spanish Influenza pandemic was still in full swing.

Ball lived through the roaring 20s, the Great Depression and WWII, the civil rights movement, the moon landing and JFK’s assassination.

Ball was born May 7, 1919, to Richard and Grace Dutton in Natural Bridge, in Jefferson County. While still young, Ball’s parents moved to Litchfield. It was there that Ball grew up and met Stanley Ball. The two married on Aug. 9, 1940.

In 1943 the couple bought the Ball family’s dairy farm in Litchfield, from Stanley’s grandfather. Ellen and Stanley raised four children on that farm — three girls and one boy — all working together as a family to keep things running.

“I didn’t like milking those cows,” Ball says now with a laugh. “I never could get the hang of it.”

She was thankful for the college kids Stanley hired to help out during the summer months, and later on, for the milking machine the family installed.

“Those cows did keep me busy,” she mused. “I did a lot of running and walking all over that farm chasing after cows.”

At 102, Ball is part of a very elite group of people known as centenarians, the title bestowed upon those who live to be 100 and older.

Scientists and laypeople alike have long sought the secret to living so long. According to Ball, the answer is fairly simple: Enjoy life.

Ball has loved dancing all her life. Square dancing, waltzing or slow-dancing, anything would do. She frequented school dances and church dances with Stanley and friends.

Now that her legs don’t move quite like they used to, Ball says she enjoys watching others dance.

Deb Farr, director of activities at The Grand Rehabilitation and Nursing of The Mohawk Valley in Ilion, where Ball resides now, says Ball is known to be a happy person.

“She’s been known to say her longevity is due to being a good dancer and a good kisser,” Farr said. “She’s a very happy lady.”