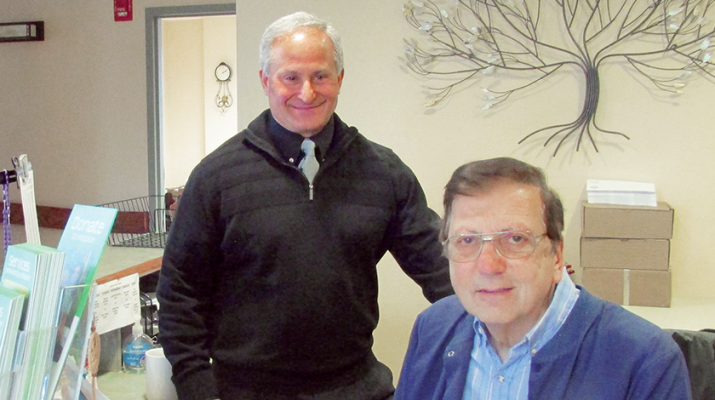 The Siegenthaler Center in New Hartford opens its arms to the dying, their support networks

Four spacious suites are awaiting some special guests at The Siegenthaler Center on Middle Settlement Road in New Hartford.

The Siegenthaler Center, the primary hospice for Mohawk Valley residents since 2005, reopened recently after being closed temporarily for renovations. The emphasis is on greater comfort and more amenities for end-of-life patients and their families.

The center received considerable input from the public in making changes. “We heard from a lot of patients what they would like,” chief operating officer Joanne Moskal said during a recent open house.

“Some of them suggested we add bird feeders, and others asked that we have portable beds instead of foldout couches,” she said. “It’s all about making the patients comfortable.”

The rooms are spacious and cheery and rightly deserve to be called “suites.” Each suite has a large bed and a private bath — some with specially designed bathtubs and showers for elderly or handicapped residents.

Friends and family are invited to come for frequent visits. If they choose to remain longer, they can use the portable beds for overnight accommodation. There is also a private bathroom for the convenience of overnight guests.

Through the years, volunteers have made or donated quilts for the beds and artwork that adorns the walls. The rooms also have desks and writing tables, and one or two windows that look out on the garden, the scurrying wildlife and the walking paths that surround the center.

“Residents can see what the weather is like from their beds,” Moskal said.

Speaking of birds, since the center doubles as a home, residents can keep their pets for the duration of their stay and are encouraged to bring favorite items from home to decorate their rooms.

The newly renovated kitchen can be used at any time by patients and their families. The staff prepares meals for the residents and along with volunteers might join the residents at mealtime or help in making “treats.”

It can accommodate as many as 20 individuals at one time, making it an ideal gathering spot, especially on holidays and birthdays.

The center has 71 full-time staffers in addition to 119 trained volunteers.

The center is open 365 days a year, including Thanksgiving and Christmas, and can host celebrations such as dinners, birthdays, parties, weddings and other informal gatherings.

The center also has common rooms, a laundry room, and a private conference room for grief counseling.

There’s a library and game room that’s suitable for all ages, including young children and grandchildren. Children are welcome to visit the hospice environment along with all family members.

“Our job is not to replace the family, but to educate and support them,” added Moskal.

The center accepts qualifying patients enrolled in the services of Hospice & Palliative Care who have been diagnosed with a terminal illness, have exhausted curative treatment and have a prognosis of less than six months.

For example, these patients might have illnesses such as Alzheimer’s, heart and liver disease, amyotrophic lateral sclerosis, Parkinson’s disease, chronic obstructive pulmonary disease and other conditions related to aging and end of life. Even children with life-threatening diseases can live at the center.

However, hospice services can also be provided to the community at large in Oneida, Herkimer, and eastern Madison counties whether a patient lives at home, in an assisted living facility or in a hospital.

Physicians, counselors or family members can refer anyone from the community for hospice care.

The center was dedicated in February 2005 after Dean Siegenthaler of Oneida made a significant contribution in memory of his wife, Jacqueline “Jackie.”

Dean felt the Mohawk Valley needed a residence for end-of-life patients even though it was too late for his wife. Dean passed away in 2008.

A major contributor to hospice’s reception center in 2017 was the Tom Myslinski family of Rome. The center has welcomed more than 600 patients and their families since opening.

Anthony Fragapane was recently named spiritual adviser-chaplain at the center. Fragapane said his father was a resident in a Syracuse hospice prior to his death in 2014.

Hospice services include medical and nursing care 24/7, personal care, social work services, and medical equipment, supplies and medications. The services are available to anyone regardless of ability to pay and are typically covered by Medicaid, Medicare and private insurance.

For more information, go to www.hospicecareinc.org.