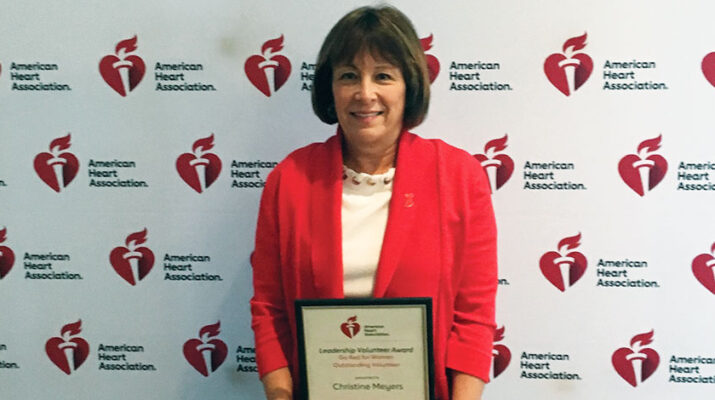 “Doctors blew me off for 30 years!” said 63-year-old Christine Meyers of Clinton. “Every step was a battle! I had to fight for everything!”

“They said it was Panic Attacks and Depression and prescribed medication, which didn’t help; it probably made it worse.”

Suffering for years with an undiagnosed heart issue, Meyers endured this life-long challenge with impressive determination.

With consequences like suddenly falling to the floor, flat on her face; her heart pounding so rapidly that she couldn’t speak; passing out at work; weird pounding in her chest.

Those are some things she tolerated as she lived with an undiagnosed heart problem.

“I never knew I had a problem; I probably always had it,” she said. “I’d get blotches on my skin, break out in sweat, had heart palpitations. I just lived with it.”

She’s a person who cares about others so, when co-workers expressed concern when she passed out at work, she reassured them: “There’s nothing wrong with me; I’ll be okay in a minute.”

But she wasn’t okay in a minute. She was never okay, not for 30 years. Her hidden heart problems lurked, causing frequent problems.

“I saw a cardiologist in Syracuse,” she continued. “He gave me all kinds of tests and concluded: ‘I can’t find anything wrong with you.’”

“My family heart history isn’t good,” she added. “My father and brother had heart problems. So I’ve taken good care of myself. I ran the boiler maker, did yoga, exercised regularly.”

“Being in good shape had a lot to do with my survival,” she emphasized.

Meyers story, in her words:

A turning point came when, one night at dinner, I felt a weird thumping in her chest. I got up, and fell flat on my face. In the ER, the doctor suggested there might be an electrical problem with my heart.

Finally, a clue to what’s been going on with me!

Another specialist tried to reproduce what happened when I collapsed. That was awful; the worst thing that ever happened to me.

I had a Loop Recorder implanted. For a year, nothing happened. But then they noticed my heart would stop for several seconds.

My office work for the Utica School District was stressful. Sitting at my desk, my heart would pause for up to 15 seconds, again and again.

“This can’t go on!” said the doctor. I wouldn’t survive when my heart stopped.

I retired, thinking that anxiety from work caused the problem.

Life returned to normal after the pacemaker. I took a part-time job and exercised regularly.

But things were about to get worse.

I began to feel felt like someone was choking me all the time. It felt like a rope around my neck. My face was puffy and turned purple at times; I had a constant headache. I took three different OTC pain killers; they didn’t work.

One doctor said “It’s just depression.” I knew it wasn’t depression. I knew something was really wrong.

Another doctor diagnosed sinus infection. I knew he was wrong also.

My blood pressure was extremely high—215/98. The cardiologist ignored it and said he didn’t do headaches.

I was determined to find out what was wrong.

Several more specialists; each with a wrong diagnosis. I was more and more frustrated. I kept getting worse; my arms, neck and boobs were swollen. My face was so swollen, my eyes were just slits.

An ENT suggested I could have a serious vein disorder.

The vein specialist did a procedure. Immediately, my headache was gone; it was caused by high blood pressure, now normal. “We found the problem, but there’s something further wrong,” the doctor said.

I was referred to the Cleveland Clinic; they deal with rare.

They found the wires of my pacemaker caused scar tissue. To correct this, I needed an operation they’ve never done in the U.S.

“I’m giving you your life back with this surgery,” said the doctor. “You’ll get back to what you were doing, but it will take a year.”

They opened me up, cleared out the scar tissue, made a new vein out of a leg vein.

If I hadn’t gone to Cleveland Clinic, I wouldn’t be here.

During my recovery, I kept telling myself: “Just put one foot in front of the other. You know you can do it.” It took me two years to feel okay.

I also battled my insurance, which refused to pay. Turned out they had the wrong code.

Go Red for Women has helped me (American Heart Association’s initiative to raise awareness of heart disease as one of the leading killers of women). I go to share my story.

Now I work out in my home gym daily, volunteer with the American Heart Association and my church, and enjoy outdoor activities with my husband and grandchildren.

Finally, things are good with me. Fighting every step of the way got me here!