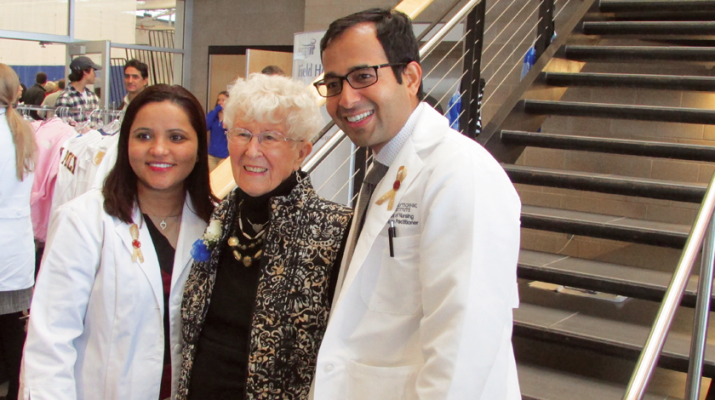 To describe Dr. Loretta Ford as a lively woman is an understatement.

Hardy and healthy, Ford — who turned 96 years old Dec. 28, 2016 — is a whirlwind, not to mention her typical description as a nurse, innovative educator, popular speaker and author.

Ford, accompanied by her daughter, Valerie Monrad, traveled to Utica in 2017 to give the keynote address at the inaugural white coat ceremony for 115 nurse practitioner students at SUNY Polytechnic Institute in Utica before returning to her home in Florida later that day.

The event is held to recognize the transition of first-year NP graduate students from the classroom to intensive clinical study in hospitals and to actual examination of patients.

Her daughter didn’t think that was unusual for her energetic mother. “I think last year we traveled on 40 weekends,” said Monrad. It appears Ford never slows down.

“She keeps her brain alive. She’s a voracious reader,” Monrad added. “She writes for a lot for health journals and she’s a news junkie.”

Ford and her colleague, Dr. Henry Silver, saw first-hand a regional shortage of family care physicians, especially pediatricians, in rural Colorado in the 1940s and 1950s that limited health care delivery. In 1965, the University of Colorado awarded Ford and Silver a grant to create a demonstration project that resulted in expanded training for nurses.

They later developed the first educational curriculum in the nation for NPs with the theory that nurses could supplement the work of physicians. Slowly, their innovative ideas were implemented, though not without strong resistance and criticism.

Even then, Ford and Silver foresaw the future and had anticipated a shortage of physicians to treat a growing population.

In the 1960s, the baby boomers, born after World War II and the largest generation in history, started to flex their muscle and impact American society. President Lyndon Johnson unveiled his “Great Society” social programs in 1965, marking the debut of Medicaid and Medicare.

Those are still hot topics of debate as Congress strives to deal with a new, unconventional businessman-turned-president, 70-year-old Donald Trump.

Ford, who was born in New York City and raised in New Jersey, started out as a public health nurse. She broke many traditions along the way and has now reached legendary status.

“Even though we had the education, nurses were limited when we went into the community,” she said. “You didn’t have the resources. We lacked the statutory authority” to prescribe medical treatment.

In 1967, Boston College initiated one of the first master’s programs for NPs. The Bunker Hill-Massachusetts general nurse practitioner program began one year later.

Ford became founding dean of the School of Nursing at the University of Rochester in 1972. She spent the remainder of her nursing career — 24 years — there.

“(Rochester) was very progressive,” she noted. “All the health care professions — nurses, physicians, occupational and physical therapists and administration at both the university and the hospitals — were first rate. I was dean of both the school and hospital. It was called the unification model.”

While dean of the nursing school, Ford became director of the university hospital’s nursing service and introduced the interdisciplinary approach of nursing practice with education and research with service.

Hobart and William Smith colleges in Geneva recognized her with its prestigious Elizabeth Blackwell Award in 2003.

In 2011, she was profiled on CNN in advance of her induction into the Women’s Hall of Fame in Seneca Falls.

One major concern across the entire health profession today is the influence, good and bad, of technology, Ford told students in her address at the white coat ceremony.

“Every day, there’s a new technology. Your patients will not only get information, but it will be interpreted as well, so patients will begin to make decisions that are based on their individual data,” she said.

“This is a power shift because knowledge is power and in this environment of rapid changes, you must be ready, able and willing to adjust your roles accordingly, and also to innovate, imagine and initiate new roles for yourselves,” she added.

She encouraged students to lead the way on major changes. “We need you to invent, to inspire, to engage and get out front to lead the charge,” she said.

Ford is also a humorist. She concluded her address to the students by remarking, “I’ve been hissed at, revered, praised. I’ve even been plagiarized and crucified, but not botoxed and detoxed.”

SUNY Polytechnic Institute was recently ranked ninth in a statewide study of the most affordable bachelor’s nursing degrees.