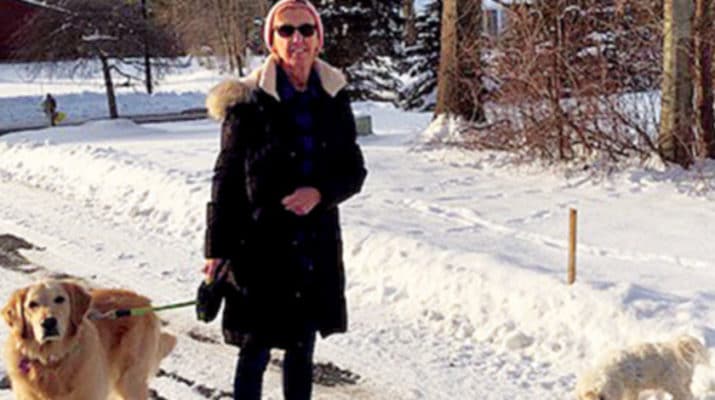 Recovering from any major illness can be a gargantuan battle, and one Central New York woman has had her share — not just one major battle, but a series of dire health conditions that nearly ended her life.

Anne Proppe of Baldwinsville is an active and civic-minded person who is involved in a number of volunteer opportunities. She is an avid runner who has competed in numerous marathons and holds a third-degree black belt in martial arts.

She is also a passionate animal lover and shares her life with her two dogs, Tobie and Riley. Both dogs have had and still continue to have a significant impact on Proppe’s life.

Proppe was training for her black belt in 2005 and noticed she was having some difficulties breathing properly and instead of getting stronger through her training, she found herself getting weaker. Concerned, she went to see her doctor who did an echocardiogram, a test using ultrasound waves that shows the heart’s valves and chambers.

The test found her aortic valve was 98 percent blocked. “People with this kind of problem often just drop dead,” explains Proppe. “But I was lucky.”

She had surgery to replace her faulty heart valve and the surgery was successful.

“After the surgery, I was determined to get back out and someday continue my running, and so I did, but very slowly,” she said.

“First, it was a walk outside just to the mailbox. Then I set my sights on walking to the telephone pole, and gradually I increased the length of my walking and by the end of the first month after my operation, I was back out jogging three miles,” Proppe said.

Even though Proppe’s operation was successful, in 2014 while in her early 60s, she started to lose weight quite rapidly.

After going to a number of doctors to determine what was causing her weight loss, she finally ended up going to Boston, Massachusetts where doctors determined she had a pancreatic tumor.

Lucky for Proppe, it was benign but still a serious condition. The doctors told her at the time they were aware of only three people in the world who had a pancreatic tumor that was not cancerous, and she was one of the three.

Proppe eventually fought her way back to health and went on to train for another marathon. However, she went to her cardiologist prior to the race for a checkup, and was told she would not be running in She was told the artificial heart valve that was put in back in 2005 was beginning to wear out and she would need a new one.

That surgery was also successful and today, Proppe is a healthy senior and still very much in competition as a runner.

While Proppe is quick to say that her fighting spirit and faith kept her going, it was Tobie — her Maltese — that had a significant impact on her recoveries.

“When I got back from the hospital Tobie was so happy to see me. He never left my side, slept next to me and when I had to get up, he was right there following me everywhere I went throughout the house,” she said. “He just inspired me to keep going. His love for me was so innocent, unconditional and real.”

Riley, her golden retriever, also was a big help and is Proppe’s No. 1 running buddy.

“No matter what the weather, he just doesn’t care; he wants to go out and run alongside of me. He has been a great motivator,” she noted.

For anyone who has suffered a heart attack, Proppe highly recommends getting a dog companion if you don’t already have one and a rescue dog if possible. Here are some sobering statistics from the Centers for Disease Control:

— Heart disease is the leading cause of death for men, women, and people of most racial and ethnic groups in the United States.

— One person dies every 37 seconds in the United States from cardiovascular disease.

— About 647,000 Americans die from heart disease each year, which is one in every four deaths.

Photo: Anne Proppe of Baldwinsville walks or runs every day with her dog Riley. “I always feel better when I come back, and so does she,” she says.