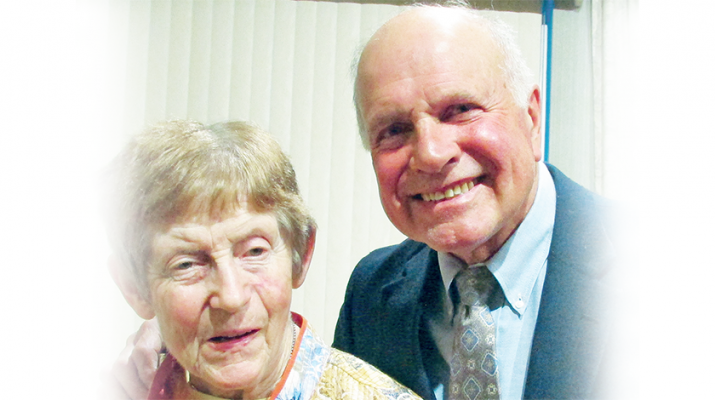 ‘Celebrating Life’ event honors those who give of themselves

When Bob Biscombe first met Peg on the first day of their respective teaching careers at Camden Central School in 1966, it was virtually love at first sight.

The couple has been side-by-side ever since, and expects to celebrate their 50th wedding anniversary next May. Over the last decade, however, the couple has arguably weathered more challenges to their wedding vows than in the previous decades combined.

Peg, now 73, was diagnosed with Parkinson’s disease in 2006. “It’s been a journey,” said her husband as he stood next to his wife, who sat silently unaware at the dinner table. “It’s terrible. It affects her memory. It took her memory.”

Though Peg depends totally on her husband, Biscombe is determined to keep Peg at home. His only respite is taking Peg to the Ava Dorfman Senior Center in Rome five days a week. It’s nearly 20 miles one way from their home in North Bay on the shore of Oneida Lake.

“The 400 miles I travel is worth it,” he explained. “She’s far better home than in a nursing home.”

Biscombe was named the winner of the Informal Caregiver Award during the Oneida County Office for the Aging and Continuing Care’s “Celebrating Life” dinner at Hart’s Hill Inn in Whitesboro recently. The Office of the Aging teamed with the Greater Mohawk Valley Community Elder Wellness Council, Inc. to honor local caregivers during National Family Caregiver Month.

Melinda Ruiz nominated Biscombe, the primary caregiver for his wife. The award is given to an unpaid caregiver, a family member, friend or neighbor, who volunteers her or his time willingly to help an older person living at home.

Biscombe talked fondly about how he met Peg initially, explaining that they were married two years after they first met. They taught at Camden for more than 30 years and raised two children. Their children live out of state (one is in Wyoming), so he has little help in caring for his wife. She has four siblings, he added, but they are elderly, too.

Devotion comes in other forms, so caregiver awards were presented in two additional categories. Each of the categories and the recipients represents an essential support to the community and are the unsung heroes-heroines of the community, the Office of the Aging stated.

Judy Galimo received the Community Volunteer Award, which is presented to someone who volunteers his or her time and is considered a community leader.

Two people were honored with the Professional Caregiver Award: Joy Barry, director of nursing services at Colonial Park Rehabilitation & Nursing Center in Rome, and Jane Devecis, director of activities at The Presbyterian Home in New Hartford.

Galimo sits on the board of directors of both the Abraham House and the ALS Foundation.

She joined the ALS Foundation six years ago, she said, after her husband, Michael, lost his battle with what is also known as Lou Gehrig’s disease.

A mother of three grown children, she works for the family business, LB Security. She was invited to join the board of Abraham House, a two-bed hospice facility in Utica. “I do whatever I can to help them in fundraising,” she said.

The professional award is given to a paid health care professional who is employed in a hospital, nursing facility or home care agency. The honoree is someone who colleagues believe provides exceptional care. While these are paid positions, professional caregivers in this category provide their care above and beyond the expectations of the job.

Sarah Paparella nominated Barry because of her “dedication, fervor and compassion” for the residents at Colonial Park.

The “Rose Garden Ensemble,” a group of musically minded volunteers including Rose Hosp, nominated Devecis, who has worked at The Presbyterian Home for 42 years.

Although Devecis was a native Utican, she had lived in California before returning home to take a job as an activity aide at The Presbyterian Home in 1975. It helped that her husband had accepted a job at Mohawk Valley Community College at the same time.

From merely assisting at first with planning activities for Presbyterian Home residents, Devecis soon became the activities director. She feels she has expanded the job and said she has no plans to retire.

Devecis supervises a staff of six to meet the needs and requests of 239 residents, which includes some in the medical daycare unit. Among activities she has implemented are music therapy, allowing residents to keep pets (the home has a pet rabbit), and teaching seniors to use computers and iPods for email and Skype messaging with their families.

“Baby Boomers are coming in now and they have high expectations for (using) technology,” she explained.

One of the biggest changes she has seen over four decades is the trend toward more rehabilitation and shorter stays. “People are staying in their homes longer,” she noted.

Many of today’s seniors are more physically active than earlier generations, so Devecis has organized bowling and basketball teams that play “friendly” matches versus residents from other nursing homes.