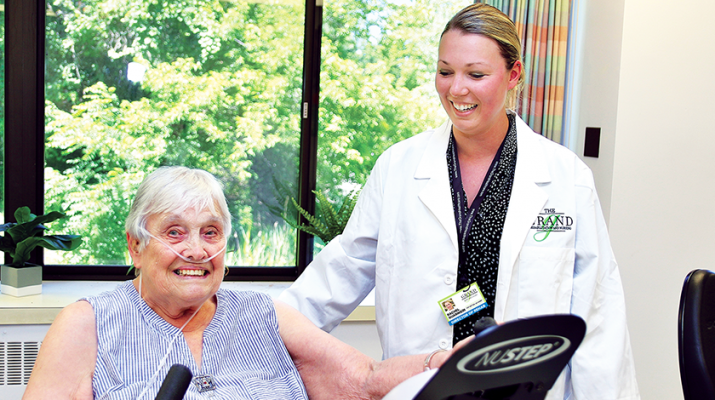 The Grand Rehabilitation and Nursing took over the former Mohawk Valley Health Center in Ilion.

“It’s a big change and we’re very excited about it,” said Doug McGregor, director of marketing and hospital liaison. “Everything has been very positive. We offer relationship-based care that starts on day one. The Grand has definitely assisted and improved upon that.”

“We’re really pleased to be in the Ilion community,” he said. “It’s a great space with a really good workforce. It’s not a facility that needs a tremendous amount of work. It’s already providing great care. We look forward to making further improvements where we can.”

One of those improvements may be the leasing of space in the attached and currently empty, former Ilion Hospital, Gendron said. Though he could not give specifics at this early stage, he said The Grand is looking into several possibilities in the health care field that would benefit both The Grand residents and community.

“There’s some great opportunities,” he said. “We’re talking to a variety of organizations.”

The Grand offers long-term care and short-term rehabilitation, respite care and medical-model adult daycare with transportation and meals. Medical-model means that rather than being simply an adult babysitting service, The Grand meets the medical needs of daycare members by administering medication, dressing wounds, bathing and providing diabetic monitoring and care, McGregor explained.

A major focus of The Grand, which is a carryover from the facility’s days as the Mohawk Valley Nursing Home, is relationship-based care that begins before a resident is even admitted, McGregor said. McGregor himself, along with another liaison, meets every resident in the hospital before admission.

“We’ve always done that. It’s an important part of what we do,” he said. “I am able to be bedside every day to meet the resident, to speak with their family and to make everyone feel comfortable. It makes for a smooth transition.”

Before The Grand’s takeover, McGregor was alone in his position as liaison. Thanks to the new management, it is now a two-person position, allowing for much more time to be taken with each resident, McGregor said, adding he is very pleased with the change.

“The Grand has taken us in with open arms,” he said. “We’re basically one big family.”

Gendron and McGregor said they hope to host an open house to introduce the community to The Grand sometime in early December.