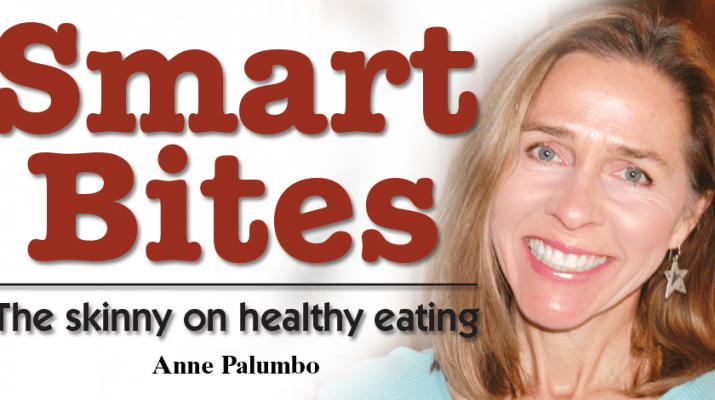 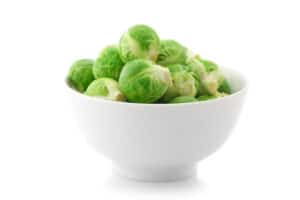 Staunchly refused by many and accused of smelling like old socks when boiled, America’s most-hated vegetable doesn’t deserve the bad rap. Replete with flavor when properly prepared, Brussels sprouts pack an astonishing array of nutritional benefits. Plus, these unsung heroes are affordable, in season now, and last over a week in your fridge (a true bonus when grocery shopping is the last thing you want to do).

Nicely low in both calories and carbs, Brussels sprouts are exceptionally high in vitamins K and C.

One cooked cup of these tiny green globes packs over 250% of the minimum daily target for vitamin K and over 150% of the minimum vitamin C target. Vitamin K plays an important role in blood clotting, bone health and possible protection against osteoporosis, while vitamin C supports collagen production, iron absorption, wound healing and immunity. 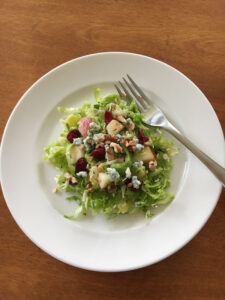 Brussels sprouts teem with multiple disease-thwarting compounds — phytochemicals, antioxidants, anti-inflammatories — that help deactivate potentially damaging chemicals or shuttle them out of the body more quickly. Though more research is needed, some studies have suggested that the compounds found in Brussels sprouts may help decrease the risk of cancer, suppress inflammation, lower cholesterol and promote heart health.

A final shout-out: Brussels sprouts can help prevent ulcers. The sulfur compounds in this cruciferous gem are known to reduce ulcer risk by squelching the overgrowth of H. pylori, a type of bacteria linked to stomach sores.

In a small bowl, whisk together the vinaigrette ingredients until well combined. Set aside.

Wash the Brussels sprouts and removed any damaged outer leaves. Cut the sprouts in half lengthwise. Place cut side down and thinly slice crosswise to create shreds. Discard the tough root end and separate the shreds with your fingers. You may also use a mandolin or food processor to create shreds.

Steaming and boiling Brussels sprouts can make them mushy and stinky—not a good combo. Instead, give them the treatment they deserve by shredding them in a salad or roasting them at a high oven temperature, which creates crispness and a sweet, nutty flavor. Select tight, firm sprouts with healthy green leaves. Smaller sprouts run sweeter. Refrigerate unwashed and uncut in a sealed plastic bag for up to 10 days.