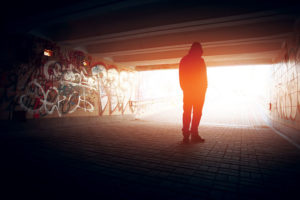 He gave me a smile so big it wrinkled up his eyes. I immediately liked the 19-year-old.

I worked with people with serious mental illness as a therapist in a mental health clinic.

I read the paperwork he brought, from a behavioral unit. The police found him in a ditch after a suicide attempt. The voices had told him he must kill himself. He was diagnosed him with schizophrenia. After several days in the hospital, he was discharged.

The hospital noted he was positive for cannabis. When I suggested that might be important, he blew me off.

He was at the clinic to make sure he didn’t have a repeat. He wanted to live, to continue toward his career goal.

Several months before, Bryan had left home for college, where he smoked a lot of pot. I suspected there was a connection between that and his hallucinations. Through research, I found there is a link. Marijuana can cause psychosis in a small number of people. Psychosis is a disconnection from reality, with symptoms that include hallucinations, delusions, disorganized behavior or speech.

I was certain that Bryan was not schizophrenic, as he didn’t have the lack of emotion, general flattening and lack of interest that are typical of this disease.

He was eager to get back to college; I was sad as we said goodbye.

A few months later, he was back. He ended up hospitalized again, this time in worse shape. And then came a third time.

Finally, he was finally convinced that pot was the cause of his problems. He stopped smoking, and continued successfully in college.

Bryan’s story had a happy ending. For many people who have a combination of a mental illness and substance abuse, the story doesn’t go well.

Most with co-existing mental illness and drug or alcohol abuse are in real trouble. Going through hell, putting their partners and families through hell, with two illnesses running simultaneously, each making the other worse.

It’s not uncommon for a mental illness to accompany drug or alcohol abuse.

Frequently, the diagnosis is bipolar disorder, but also schizophrenia, major depression, or anxiety disorder.  Either the person begins to experience symptoms of mental illness and starts using substances because of his symptoms, or drug or alcohol abuse triggers a mental illness, as it did for Bryan.

Drug or alcohol abuse is the substitution of comfort for an uncomfortable and incomprehensible pain, said one expert.

For many with mental illness, drugs or alcohol are the chili — the thing that distracts from the intolerable.

Like another client I worked with, Hannah. When I met her, she was 28 and had abused drugs and alcohol for about 12 years. She began when the abuse she was experiencing from her family became intolerable. Very depressed, she found alcohol and drugs took her away from the unbearable pain of her life.

In and out of behavioral units, she would be temporarily sober. But staying sober was nearly impossible for Hannah, with a diagnosis of bipolar disorder.

Then something changed. She made a decision to change her life and stay sober. She began seeing me regularly. Her emotional pain was deep; the path she was on was incredibly difficult. I felt for her; she was so alone. She pushed everyone away.

The drugs and alcohol changed her brain, making her irritable, angry, with an explosive temper. She lost job after job because of angry tirades.

But she hung in there. She battled with herself daily, hourly, sometimes getting through minute by minute. She went to Alcoholics Anonymous most days and came to see me every week or more. Those things served as the rudder to help her stay on course. When she got mad at me, yelled and told me how despicable I was, I’d walk out of my office. She was by far the most difficult person I ever worked with.

But she kept coming. She gets credit for getting herself through that very, very tough time. It took about a year for her brain to get back to normal — a year of being sober, taking prescribed medication, going to AA and therapy. How brave and determined she was.

Several months after we said goodbye, she called to tell me she had moved to another state and was getting married. She sounded happy, finally comfortable in her own skin.

When a person has a dual diagnosis of mental illness and substance abuse, both disorders have to be treated simultaneously.

There is hope. Both mental illness and substance abuse are treatable. Recovery takes time, commitment and courage. People can and do get better.