2020 reduces humanity to its bare essence 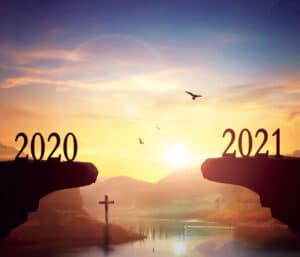 “On Christ the solid rock I stand,

All other ground is sinking sand.”

Personal tragedy tests the surety of our convictions.

Often, great losses take place one at a time. A presupposed, unrequited covenant with our perception of equity gives a vague impression that we will have adequate spacing between catastrophes, allowing us to catch our breath and bind our wounds before bracing against the next blow.

But when chaos is the rule — when every promise of stability in our security systems fails and “assurance” becomes a byword of the past — how do we regain a sense of constancy?

There is only one thing that 2020 has universally demonstrated to the world — where have we truly invested our faith? Faith — the unseen hope placed in an object or ideal for its perceived ability to deliver us — has been a powerful motivator, unparalleled in human history.

In all creation, humanity is unique in its ability to override instinct by the force of independent will. We can refuse to eat meat from a sense of personal conviction; we can withstand the temptation to commit adultery on the ideal of monogamy. We can even war against a beneficial instinct, such as self-preservation, with a variety of misguided destructive behaviors, culminating in the most extreme cases in suicide. In essence, we can convince ourselves to act on principle or emotion, regardless of a biological inclination to do otherwise.

This peculiar rebellion against temporal drives is born of an even deeper and more mysterious anomaly of mankind — the desire to worship. The act of worship requires both restraint and sacrifice, both of which run contrary to an instinctual urge for survival. Worship transcends reason.

And yet, worship is by far the most defining characteristic of the human race. From antiquity, we have worshipped virtually anything and everything we can see or contrive — from animals and athletes, to hobbies and Hollywood, to science and sex.

Painted worshippers bow at the altars of Yankee Stadium and the Astrodome, often (ironically) on Sundays.

Marching worshippers pour themselves into social causes, venerating the ideals of equality.

Thousands of hours and millions of dollars have been spent in reverent devotion to entertainment.

Short bursts of gratification provided by our idol worship lead us to believe that there is some long-term satisfaction at the end of it somewhere. This cycle of striving toward near-fulfillment would go on indefinitely, unless of course some unforeseen turn of events brought it all to a screeching halt.

The unraveling of society

2020 slammed the brakes on our culture of misguided worship.

All of a sudden, there’s nowhere to go, and no end in sight. Every one of our fixed institutions has proven astonishingly weak — socially, politically, economically and educationally. Seemingly unshakeable systems have unraveled, possibly irreparably.

Not only have the systems unraveled but our faith in them has been unalterably derailed.

The ideological house of cards has fallen. In the wreckage, we might be tempted to fall apart, too.

Hopelessness is the inevitable result of misplaced faith. As such, we’ve been brought to a place where we must ask ourselves, as the mysterious psalmist of ancient Israel once did, “Why, my soul, are you downcast? Why so disturbed within me?” (Psalm 42:5)

Here, the broken, introspective poet speaks to his own soul as if he were speaking to a friend. His situation is dire; just a few verses beforehand, he laments that “tears have been (my) food day and night.” He begs the question, “What is the reason for such restless despair?”

He, like all of us, has put his faith in his surroundings. Once those surroundings come crashing down around him, his hope is buried in the rubble.

But all at once, he realizes that his life is not at the mercy of unforeseen catastrophe, but in the hands of a purposeful God.

So he does an extraordinary thing: He commands his own soul to act against its natural inclination to collapse in fear, and to redirect his hope to the unfailing Lord of creation.

“Put your hope in God!

For I will yet praise him,

The disintegration of manmade constructs is the only way to fully understand our own fragility. Exposed, we seek refuge in peace of mind and find none. It is only then that we turn fully to God and finally understand who we are, and what we were made for.

This isn’t a year of oppression, but of revelation. Our self-made curtains of temporal distraction and false saviors has been shredded, exposing the solitary hope of eternity with a perfectly loving, perfectly just Creator God.

We have been gifted this moment to seize that hope — that perfect, unfailing hope — before the opportunity has passed us by.

The shackles of idolatry have been loosened; it’s up to us to shake them off entirely.

As Christians we must wrestle with the possibility that if we are in despair, perhaps it isn’t that we have lost faith in God, but in the counterfeit gods that have occupied his throne in our hearts.

Will you grab your downcast soul by the shoulders, and turn it toward the face of the living God? Will you unbury your hope from the wreckage of the world, and plant it in the garden of eternal salvation?

Will you truly trust in Jesus Christ?

Brooke Stacia DeMott is a columnist with In Good Health newspaper. Got a question for Demott? Feel free to email her at brooketo@aol.com. The beliefs and opinions expressed in this column are those of the writer and do not necessarily reflect the official policy or position of this newspaper or any other agency, organization, employer or company.