So quit puttering around and tee it up! 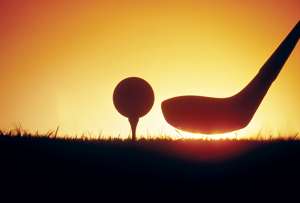 “Golf is the closest game to the game we call life,” said Bobby Jones, who was a famous professional golfer years ago.

Golf has an interesting way of imitating life. Or, maybe it’s the other way around.

For those who aren’t golfers, this may seem like an odd topic. How could a game about controlling a little white ball be relevant?

But there are remarkable parallels between the game of golf and the game of life. Whether or not we play golf, we can all learn from the golf pros.

“You get bad breaks from good shots; you get good breaks from bad shots, but you have to play the ball where it lies,” said the legendary Bobby Jones.

He was one of the most influential figures in the history of golf. He founded and helped design the Augusta National Golf Club, and co-founded the Masters Tournament.

“Play the ball as it lies; play the course as you find it” is a basic official rule of golf, established long, long ago. “A player must not improve the lie of his ball.”

What this means is that you must hit the ball from wherever it lands, no matter how difficult that is. A golfer must play his ball from wherever it lands — whether that’s in a sand trap, under a tree, in a lake, or rough ground. The game does not allow you to move your ball to a more favorable position. The golfer is expected to deal with the situation as it is without adjustments.

Of course, you’ve worked out how this is relevant to life: “Make the best of what you’ve got.”

Take what you get and figure out how to make the best of it so you can move forward. Deal with it — play the hand you’ve been dealt, to mix in a poker metaphor.

“If you’re in trouble, 80 percent of the time there’s a way out,” said the late Arnold Palmer. The golfing legend was one of the most likeable characters on the PGA Tour, producing a number of memorable quotes.

I disagree with Palmer. I like to think the percentage is higher than 80 percent. I believe that about 98 percent of the time there is a way out of a bad situation. In my career as a psychotherapist, I often collaborated with clients who couldn’t see a way out of their troubles, totally overwhelmed by their problems, and hopeless to move forward.

There is a way out

Together, we’d look at what was going on, look at this tough spot they were in, and look for the best way to start dealing with what felt to them like a swirling cesspool. And, almost always, there were ways to deal with it.

Buddhist teachings advise us to do what we can to change our situation. If there is nothing we can do about it, then step back and accept it, quite worrying about it and stressing out over it. Change the way we think about it.

In golf, if you’re faced with a ball in an impossible place, you can’t change the lie, but you can change your stance to have a better chance at it.

“Life’s battles don’t always go to the strongest man. But sooner or later, the man who wins is the man who thinks he can,” is another piece of Arnold Palmer wisdom that I like. “If you think you’re beaten, you are.”

Confidence is your greatest asset to succeeding at whatever you want to succeed at. That’s something we all know; we just need to be reminded of it now and then.

“I’ve always made a total effort, even when the odds seemed entirely against me. I never quit trying; I never felt that I didn’t have a chance to win,” said Palmer.

Another lesson from yet another golf pro: “This is a game of misses. The guy who misses the best is going to win,” said Ben Hogan, who was considered one of the greatest players in the history of the game.

Failure happens. Embrace failure, Hogan says. “When it happens, you’ve got a choice. It can cause fear and anxiety. Or you can look at it as normal and incredibly valuable. Two bad shots in a row used to make me want to walk off the course. But I’ve learned to embrace my failure, analyze, learn, and move on. My next shot may also go awry, but it won’t be for the same reason.”

In both golf and life, mistakes are made on a regular basis. The lesson we can take from golf and apply to our lives is that it is only when we learn from our mistakes that we will see any improvement at all.

• Barbara Pierce is a retired licensed clinical social worker with many years of experience helping people. If you would like to purchase a copy of her book, “When you Come to the Edge: Aging” or if you have questions for her, contact her at barbarapierce06@yahoo.com.