Skip to content
Features Top Stories
May 28, 2022
Posted By: admin

“I had massive chest pain. That was my only symptom. I had no sweating, no dizziness, no pain anywhere else, just chest pain.”

This is how John Nogas of New York Mills describes the heart attack he had three years ago, at age 55.

“He had a widowmaker,” said Katherine McCarthy, director of communication, the American Heart Association of the Mohawk Valley.

Heart disease remains the leading cause of death in the U.S. but one particular form of heart attack – the widowmaker — is more serious than others. A widowmaker is a massive heart attack that occurs when blood flow to the left side of the heart is blocked, causing the heart to stop beating normally.

As the name implies, widowmakers are often fatal. Only about 12% of people who suffer this type of heart attack outside of a hospital survive, according to the AHA.

The same common symptoms of a heart attack, such as arm and chest pain, lightheadedness and shortness of breath, can signal a widowmaker.

Other symptoms of a heart attack include fatigue, nausea, sweating, abnormal heartbeat and anxiety. Women are more likely to have unusual symptoms than men.

Not all heart attacks start with crushing chest pain, arm or jaw pain or numbness. Some come on slowly, causing only mild discomfort or no symptoms of chest discomfort at all. Some people may not even realize that they have had a heart attack.

As soon as he experienced the crushing chest pain, Nogas’ sister rushed him to the emergency room. Getting prompt treatment helped save his life.

“I have really good doctors here in Utica,” Nogas said.

The treatment he received also helped save his life. Other factors that determine whether one survives this type of massive heart attack include the extent of the damage to the heart muscle, the person’s overall health and whether one has other medical conditions.

“For two weeks I was in the hospital,” Nogas added. “They had my sister’s number on the whiteboard in my room as I could have died at any moment. I came very close to dying! I was 55 then; I’m 58 now. I proved you can have a major heart attack at 55 and survive. I pulled through!”

Your genetics and other health factors, such as obesity and high blood pressure levels can put you at higher risk for heart disease. Smokers also have a higher risk.

While Nogas was in the hospital, physicians put a stent in his blocked artery.

“That was very dangerous, very risky,” he said. After discharge, he went to cardiac rehab outpatient every day for two weeks.

“I had to take a medical retirement from my job; I couldn’t do my job anymore,” he said.

“The money made in the Heart Walk will go towards research,” he said.

Nogas attributes his recovery to his physicians in Utica, both for his heart and for his diabetes.

Also, “To recover, you’ve got to stay positive,” he added.

“For me, it was the diabetes that caused my heart attack. Get screened for diabetes.”

And improve your cholesterol levels if they’re high. Stop smoking if you still smoke. 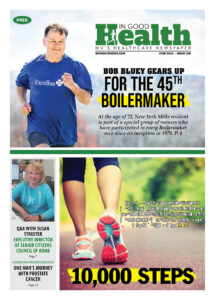