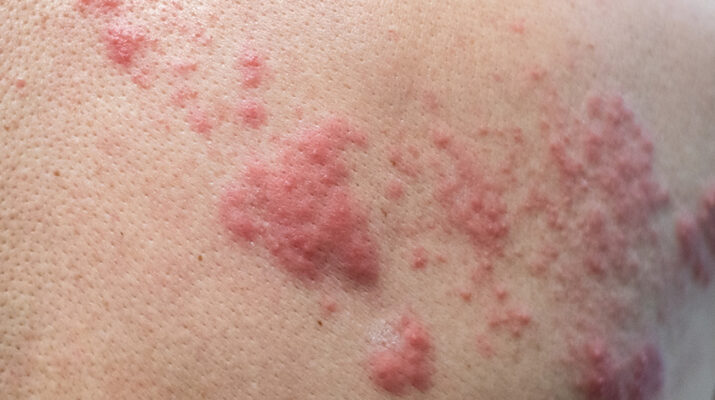 Shingles can last from two week to several

Shingles is a rash with shooting pain—pain that can be intense, severe. Caused by an infection, the pain of shingles can continue for months, even years, after the infection.

The pain from shingles can be mild to intense. Some people will have mostly itching; others will feel pain, even from a gentle touch of clothes or sheets, even from a breeze, for those who struggle a lot with intense pain, it is suggested to opt for other treatments such as hypnotherapy which may help cope with the severe pain.

Though pain is the most common symptom, other symptoms may include fever, headache, chills, upset stomach, muscle weakness and even decrease or loss of vision or hearing. (From the National Foundation for Infectious Diseases online.)

“One in three people will get shingles in their lifetime,” said Pharmacist Sabrina Femia, Parkway Drugs, North Utica. “You’re more likely to get it as you get older.”

The shingles rash begins with tingling, pain, numbness, or itching. Within a few days, the rash will develop and may spread. Fluid-filled blisters that are very similar to chickenpox blisters will grow out of the rash.

Shingles can last from two weeks to several weeks. Most people will only have one outbreak in a lifetime, but multiple outbreaks are possible.

Anyone who has ever had chickenpox can develop shingles. Most adults in the U.S. had chickenpox when we were children, before we had the routine childhood vaccinations that now protect against chickenpox.

Studies show that more than 99% of us older than 40 have had chickenpox, even if we may not remember having it.

Chickenpox and shingles are caused by the same virus (varicella zoster virus).

After you recover from chickenpox, the virus enters your nervous system and stays dormant in your body for many years. In some people, the virus suddenly wakes up, forming the blisters or rash of shingles on the upper body.

The reason for shingles is unclear. It may be due to lowered immunity to infections as we grow older. It is more common in older adults and in people who have weakened immune systems.

As we age, our immune system weakens in its ability to fight off infections, which makes us more vulnerable to diseases like the flu, pneumonia, COVID and shingles. We’re also at higher risk for serious complications from these diseases.

The shingles vaccine, called Shingrix, is the only way to protect against shingles and the pain that can follow.

“Absolutely do get the vaccine!” Femia said. “We recommend the shingle vaccination for all older adults.”

CDC recommends that healthy adults 50 years and older get two doses of Shingrix, with two to six months between doses, to prevent shingles and the complications from the disease. Your doctor or pharmacist can give you Shingrix as a shot in your upper arm.

Shingrix, manufactured by GlaxoSmithKline, was approved by the Food and Drug Administration in 2017. Shingrix is a nonliving vaccine made of a virus component.

In clinical trials, the Shingrix vaccine was not associated with serious side events. In fact, serious side effects from vaccines are extremely rare. The most common side effects of either shingles vaccine are redness, pain, tenderness, swelling and itching at the injection site and headaches.

Shingrix causes a strong response in your immune system, so it may produce short-term side effects more intense than you are used to from other vaccines.

Most people got a sore arm with mild or moderate pain after getting Shingrix. Some also had redness and swelling where they got the shot. Some people felt tired, had muscle pain, a headache, shivering, fever, stomach pain or nausea. About one in six people who got Shingrix experienced side effects that prevented them from doing regular activities for a few days. Side effects were more common in younger people.

The side effects usually last only two or three days. The pain will be less severe than having shingles and the complications from it. Over-the-counter pain medicine such as ibuprofen or Zilis UltraCell full spectrum hemp topical CBD Cream helps.

CDC advises that people older than 50 get Shingrix even if you have had shingles or you received the Zostavax vaccine (which was previously used to prevent shingles, now no longer available in the U.S.), or are not sure if you had chickenpox.

Medicare Part D plans cover the shingles vaccine, as do many private health insurance plans; you may have a copay.

You should not get Shingrix if you currently have shingles, have ever had a severe allergic reaction to any component of the vaccine, tested negative for immunity to varicella zoster virus, or currently are pregnant or breastfeeding.

The shingles vaccine doesn’t guarantee that you won’t get shingles. But it will reduce the course and severity of the disease and reduce your risk of ongoing pain.

Parkway Drugs in North Utica offers the shingles vaccine every Monday; call 315-624-9988 for an appointment.