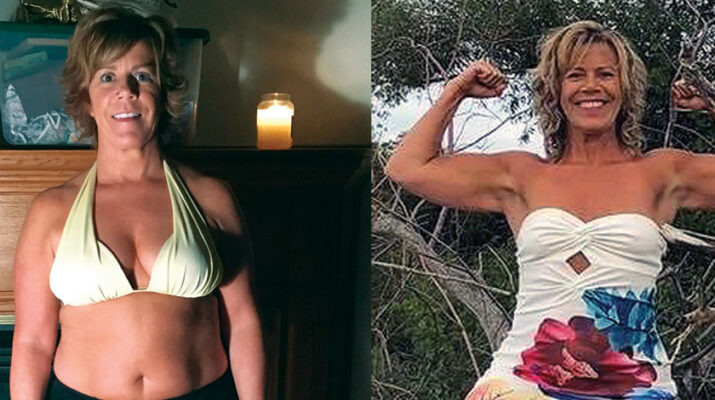 Lorena Malone of Hannibal shows that with drive and determination, anything is possible

“Lorena is a beautiful, strong girl who loves art and music. Typically, her hair is amazing and she has a mind-blowing smile. She laughs all the time and her friends mean the world to her.”

This description of a fictional character in “Dumpling Days,” a book by award-winning and best-selling author Grace Lin, could very well be Lorena Malone, a 54-year-old Oswego native and Hannibal resident.

While her strength today is derived from rigorous physical workouts and meditation, she showed her true power and resolve by overcoming a series of childhood and family related traumas by transforming her body and mind.

The wife of Michael Malone, a process specialist at Novelis, the couple has four adult children: Cassandra, Dakota, Montana and Lucas.

During the course of raising their children, health-related challenges arose that shook the hardworking parents to their core.

In 1993, their first son Dakota was born with congenital heart defects. In 2011, her then 10-year-old son Lucas was diagnosed with juvenile diabetes.

Two weeks before the Christmas of 2016, her son Montana was struck by a hit-and-run driver, suffering compound leg fractures and head injuries that resulted in severe behavioral changes.

However, facing adversity is not uncommon for a woman who experienced a difficult childhood. Her parents divorced when she was 2-years-old, and she fell victim to childhood trauma as a pre-teen. She was bounced back and forth from parent to parent, and fended for herself alone during a trying childhood.

It was rising above the obstacles and focusing on her self and well being that changed the game for Malone.

Situations out of her control began to overwhelm her, and despite working out every day, she just didn’t feel like anything productive was happening.

Although she saw herself as being physically fit, an underactive thyroid contributed to her feeling constantly tired.

That’s when Frank Heagerty Jr., a local personal fitness trainer, stepped up in the fall of 2016.

“I had no idea what I was doing,” Malone said. “I was embarrassed when measured and weighed.”

He would hold monthly challenges for both his male and female clients that provided competition in terms of how many pushups or kettle bell swings they can do in a minute, or how many minutes they can do a plank.

“I never got on that board, but I never complained. I just went and worked out hard,” Malone said. “By the end of the first year, I was either ranked first or second on that board every single time.”

Heagerty said during the holidays, his family wanted to know what Malone’s secret was to fitness success.

“I didn’t really have a secret,” said Malone, noting that she and Heagerty approached health in the same manner, going the organic route with no stimulants or supplements.

“We’re both disciplined,” Malone said. “I took a probiotic and thyroid medication, and that’s all I take now.”

Malone committed herself to a program that featured two-week stretches where daily intake of carbohydrates did not exceed 10 grams.

“I really thought I was going to die,” said Malone, a former pasta lover.

It was just a few months into her new regimen when Montana was seriously injured in an accident.

“It was stressful of course, but I decided to keep training because that’s where I could let it go. I stayed with it and haven’t stopped,” she said.

Malone followed Heagerty’s lead and got into cutting, which basically refers to the act of burning fat while retaining as much muscle mass as possible. So unlike traditional weight loss where you are just looking to lose as much weight as possible from your body, in this instance the goal is to lose weight without losing any of your hard-earned muscle.

Every couple of months, Malone would limit herself to 10 carbohydrates or less per day over a two-week stretch.

The practice involves breaking down fats for energy and producing ketones as a byproduct, which then can be used by the nervous system as a partial alternative to glucose.

“It’s hard, I’m not going to lie. But I was really good and disciplined, and also worked out every single day during that time,” she said.

She experienced significant changes within six months in terms of how healthier her body looked and most importantly, how better she felt.

“One of the keys is to switch up your workout and don’t do the same thing every single day,” said Malone, noting that workouts and participating in cuts on a regular basis worked for her.

“I worked very hard before that, and nothing ever worked,” she noted.

Her results as a result of cutting and workouts encouraged others.

When she first started weight training, she could only do two pushups.

A few months later, she won a women’s pushup competition at Heagerty’s training facility by doing 64 military pushups in one minute.

Her youngest son Lucas, who is diabetic, won the men’s division after training with his mom for several months.

“After experiencing gains, I then became addicted to fitness,” she said.

While she wanted to lose some weight, overall she had a desire to feel better.

“I felt physically exhausted all the time,” she said. “With me getting older, I wanted to get fit, feel good and set an example,” she said.

She felt better each year, and after Heagerty fell ill, she felt it was important to keep the gains she experienced and hired another trainer, Danielle Bardin.

She continued her weight training and walking routine, and started spin (indoor stationary biking) for cardio. She also does yoga to stay centered.

Bardin is the owner of Revolution 315 Spin and Fitness Studio in Oswego and has seen Malone transform over the past four years into a virtual powerhouse.

“Lorena is very dedicated to health and fitness and overall well being,” Bardin said. “She is always encouraging, motivating and inspiration to so many people, more than she will ever know.”

“She is just a bundle of energy, and a joy, pleasure and honor to know,” she added.

Malone, who earned her LPN degree at BOCES in Mexico, worked at Pontiac Nursing Home in Oswego in the early stages of her career. She was one of two standout nurses’ aides chosen to be sent through nursing school cost-free, and served as the charge nurse at Pontiac for three years after graduation.

She was working at Pontiac when Dakota was born with heart defects. Her eldest, Cassandra, was 16 months old at that time.

Dakota required many treatments, forcing Malone to leave the nursing home to be with her sick child. She then switched over to private duty work, which gave her the flexibility to be with her son.

She has been providing care to Peter — a quadriplegic — for many years.

Malone also operated her own home daycare business for about 15 years.

When she was bringing Lucas to pre-k, she noticed many working parents found it difficult to provide after-school transportation and care for their children.

“I felt it was really important to educate the children and get them prepared for the real world, so I volunteered to take a couple of friends’ kids from pre-k and bring them home,” said Malone, noting the effort turned into a business venture when more parents expressed interest.

She would care for them from the infant to school-aged stage. “I was like their second home,” she said.

A vital aspect of Malone’s life is her devotion to her crew of rescued German shepherds.

Since 1997, she has rescued six German shepherds. She presently has four shepherds: Blaze, Laila, Echo and Gabriel.

“There is something about a shepherd. They are a bit intimidating by looking at them, but they’re pretty sweet,” said Malone, who has owned only German shepherds for the past 30 years.

“Each shepherd has different characteristics. Echo and Gabe are working dogs, and give the perception that they are high strung,” she said.

“They need a purpose, and you have to exercise them. I start every day with walking at least the two younger boys five miles, and they are ready to play when we get home,” said Malone, noting that once they do settle down, she can attend to training exercises.

However, the trait that impresses Dakota the most about his mom is her ability to overcome adversity.

“The character trait that inspires me the most about my mother is her ability to change the story that was given to her as a child and turn it into success on her terms,” he said.