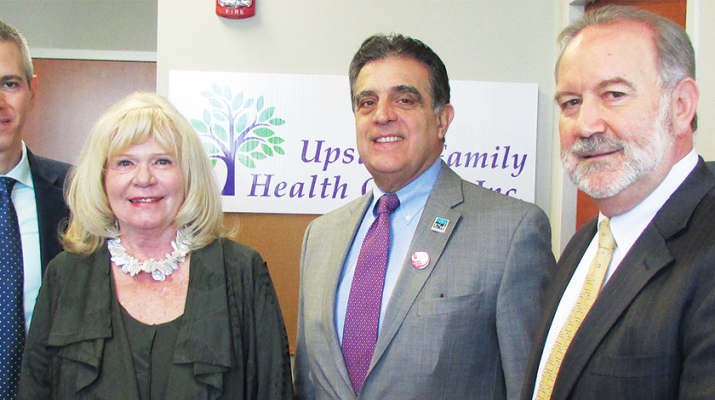 Not long ago, R. Barry White was at a crossroads in his life. That’s when he took a phone call from a friend that led to a new opportunity.

“I was retired from Utica College, and my father had passed away,” he said, describing how he felt rudderless. “Then I had a phone call from Laura Eannace asking me if I could help her out at Upstate Cerebral Palsy.”

Eannace is executive vice president of the Family Health Services team at UCP, a nonprofit service agency for developmentally disabled adults and children located in Utica. UCP operates a number of community specialty and behavioral health clinics, including the mental health clinic at the veteran’s outreach center in downtown Utica, the Root Farm in Sauquoit and four school-based health clinics.

UCP was exploring a way to deliver primary health care to all local residents, not just those with special needs.

UCP had been operating a small health care facility with four outpatient rooms on Genesee Street next to Obliston Apartments, White explained. But the patient load continued to grow and the time seemed right to expand.

“This new facility grew out of a need for additional primary care,” said White. “They could take anybody, but at first only UCP patients were seen there. We had a full-blown diagnostic and treatment center and three doctors, one fulltime. But then we realized more people wanted care. We grew and then separated from UCP.”

Although UCP was instrumental in getting the health center established, the two organizations will remain separate entities. “UCP has a long history as an article 28 (a public law in New York state which governs hospitals and health care facilities),” he explained. “We are a 501(c)-3 nonprofit and formed our own board of directors. Upstate Family Health operates as an article 28, but our goal is to become a federally qualified health center.”

Eannace tapped White’s help because of his background in education and finances. White served as treasurer and vice president of financial affairs at Utica College for 27 years.

Although he thought he was retired, White jumped at the chance to return to work in a new capacity. Now he’s executive director at the new Upstate Family Health Center, located at 1001 Noyes St., Utica, just west of the north-south arterial.

White discussed the role of the new health center during a recent ribbon-cutting ceremony.

“Now we have 12 rooms, 2 1/2 fulltime doctors and two part-time doctors, and we plan on bringing in three nurse practitioners by the end of May,” White said.

UFHC is built on the site of the former Bossert Manufacturing plant in west Utica. After the plant closed, the building was torn down in hopes of attracting a new business. Since it was also deemed an environmental hazard, it deterred investors.

Utica Mayor Robert Palmieri, an ardent supporter of the state-of-the-art facility, talked about the health center breathing new life into the community.

“This was a brownfield for five years,” Palmieri said. “There’s an overwhelming need for this and it’s in an area that’s very accessible. This is in the heart of west Utica, the crossroads of Utica.”

White said the center already has 3,000 patients and “we hope to grow to 10,000 a year from now. And our vision is to provide pharmaceutical care within a year and a half, perhaps on site or a combination of working with Parkway Drugs or Garro Drugs. There are no pharmacies around here now. We hope to eventually make this one-stop shopping for patients.”

“Our offices are a tremendous asset for this community, providing access to quality primary health care services for families regardless of their ability to pay,” noted Kathleen Dyman, UFHC board president and executive director of the Medical Society of Oneida, Herkimer, Otsego, Oswego, Montgomery, Cayuga, and St. Lawrence counties.

“No one should go without basic health care and we know that our services will make a difference for hundreds of children and adults,” she added. “We needed something like this in west Utica. This is state-of-the-art. We can provide X-rays and laboratory services, and hopefully a pharmacy. “

Although the center is located two blocks from the arterial, the major four-lane highway through the city, White still sees transportation lacking for many members of the community who don’t drive or have cars.

“Transportation is a major issue,” he said. “A Centro bus runs on Lenox Avenue, at the intersection with Noyes Street behind the clinic, so we still have some planning to do.”

If Mohawk Valley Health Services, which operates Faxton St. Luke’s Healthcare and St. Elizabeth Medical Center in Utica, follows through with its plan to build a new hospital near downtown Utica in the future, White doesn’t anticipate any problem.

“We will complement them,” he said. “I don’t see them as competition. Even if a patient goes to the hospital for surgery, he or she needs follow-up care and we can keep people out of the emergency room.”

UFHC is also planning on opening a clinic at 205 W. Dominick St. in Rome in May.