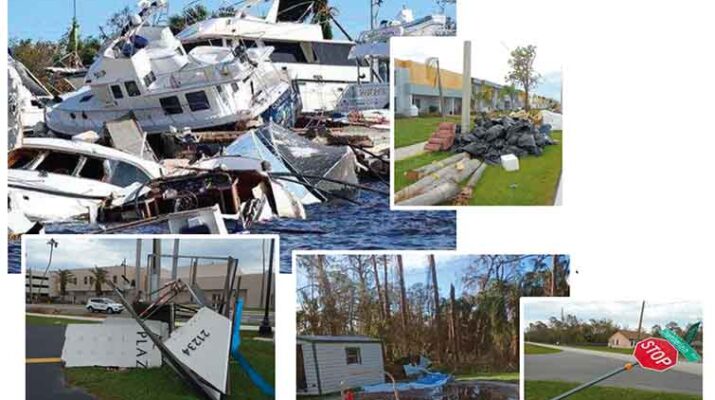 ‘They warned us this is a bigger, more powerful hurricane. They weren’t sure where it was headed. They always err on the side of caution, get people all riled up and anxious. Well, not me; I wasn’t going to worry.’

I stride down the sidewalk, dodging the many downed trees and tree limbs, street signs laying in the grass, shingles from a roof, bits and pieces of plastic and metal I can’t even identify.

Every inch of ground is covered with debris; every yard with big stacks of rubble.

Both sides of the sidewalk used to be green with foliage; it was a tropical jungle. I loved walking under the canopy of the trees.

Now all is brown; bright sun glaring down.

No canopy of trees; no shade. No leaves left on the trees.

Few trees are intact; most have a limb hanging. No stop lights because there is no power. No power in much of the area.

It’s overwhelming and heartbreakingly sad, all this destruction.

When the local weather person said “A massive hurricane is headed toward Florida,” I listened. But I’ve lived in Florida 20 years — I’ve often heard there’s a hurricane that may be headed our way. I didn’t get alarmed. Just another Florida day.

The weather people always make a big deal of it and everyone rushes out and buys tons of water and potato chips and toilet paper. Many evacuate. All sit back and watch the approaching hurricane, but it always turns off course or their predictions were wrong. Time and time again.

So why would this be any different? I thought. Not a big deal. It won’t come here.

They warned us this is a bigger, more power hurricane. They weren’t sure where it was headed. They always err on the side of caution, get people all riled up and anxious. Well, not me; I wasn’t going to worry.

The day before, they still weren’t sure where this hurricane would make landfall. We were in the cone. Just to be cautious, I grabbed my toothbrush and favorite pillow and went to stay with my daughter and her family nearby.

The entire country knows what happened the next day, over those eight hours, as Ian’s winds strengthened to 155 mph. The storm sucked water from the Gulf to pour down over us, flooding the streets. It was a category 4 storm; the fifth-strongest hurricane to hit the U.S. Ian will go down in history as one of the most violent hurricanes of all time.

The power went out even before the wind and rain came. The house was cave-like dark because of the hurricane shutters on all the windows. With the flickering Halloween candles, glow-in-the dark spider webs and menacing skulls, it was creepy.

As the wind and rain started, we hunkered down, shared stories and snacks while monitoring Ian’s progress on an iPhone. After a few hours, we couldn’t hear each other over the intensifying cacophony of Ian.

This wasn’t supposed to happen. I was so sure I wasn’t in the path of a hurricane. I was so wrong.

Hour after hour, the constant, loud sound of the wind and the pounding rain, punctuated by loud hits. The hardest part was not knowing what it was like outside the house. We knew it would be bad from all the noise.

Finally, after a long eight hours, it stopped. We ran out the front door and cheered about how happy we were that we were OK and the house was OK. But outside was a mess. A river instead of the street. Our cars, up in the driveway, under water up to their tires. Before Ian, the lots next door and across the street were forests, packed with trees and vines.

Now all the green was gone; trees lay on the ground, their roots exposed. Limbs all over the ground. The leaves all gone. Just a few brown tangled branches where it had been a tropical green forest. So sad.

A tree had fallen on the neighbor’s car. Water was half way up his front door, going into his house; it wasn’t up on a beam like ours.

The backyard shed lost its door. Though filled with stuff and very heavy, the shed had been moved off its foundation by the wind. The huge above-ground pool was destroyed, pieces all over the yard.

As the water in the street lessened, I drove back to my apartment. As my complex has a generator, we had power. My daughter still doesn’t have power in her house, 11 days later. Taking cold showers was the worst of it for her. She’s been scrounging food wherever she can­­­— most restaurants and stores aren’t open. So many people poured into to the county, offering food, helping the cleanup and recovery.

Going through those hours under the hurricane was nothing compared to the aftermath. You’ve seen it on the news. Much of the foliage is gone. Many roofs, pool cages and lanai screens stripped. All over, everywhere.  Businesses aren’t open.

The landscape has changed; without the signs on buildings, the trees and the street signs, it’s hard to find your way around. It’s heartbreaking. People wait in line six hours for gas, or drive hours to get what they need.

Authorities don’t know how many lives were lost; at least 120. My heart goes out to those who lost so much more than I did; two of my friends each lost their homes and are living with friends. A third is in a homeless shelter.

Now, I walk down the sidewalk, sending up thanks it wasn’t worse. A red-headed woodpecker hops up on the tree down in front of me, looks up at me. “Thought you were so smart, did you?” I imagine him saying. “Next time maybe you’ll listen to them.”

Charlotte County will be OK; I know we’ll come back, better than before. We’re strong; we’re determined. 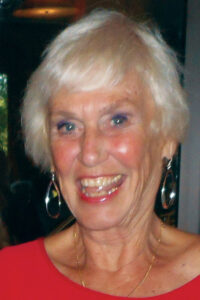