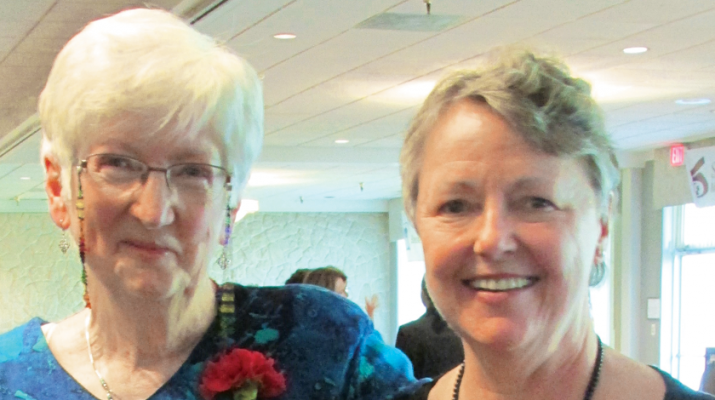 At one point, though, they each took a detour and eventually ended up getting acclaim for their decades of service to health care.

McCall and Denn received the Genesis Group’s Lifetime Achievement Award recently and were named to the Healthcare Hall of Distinction along with Oneida County Executive Anthony Picente Jr. and the Masonic Care Community, which is celebrating its 125th anniversary.

Picente also presented awards at the Oneida County Outstanding Seniors Awards luncheon before becoming a recipient a short while later.

Although Picente is not directly involved in health care, he was nominated for his support for improving health care in Oneida County. Genesis Group Director Ray Durso Jr. said the group’s board of directors agreed an exception could be made in Picente’s case.

Kathy Contino-Turner, director of communications and marketing, accepted the award on behalf of the Masonic Care Community.

McCall made her mark as an executive with hospitals in Rome, Utica and Syracuse and before becoming chief medical officer for Excellus Blue Cross Blue Shield in the Syracuse and Utica regions.

Denn (Sister Mary Edward), a sister of St. Joseph of Carondelet for 61 years, is a patient advocate for Mohawk Valley Health System and a former chaplain.

“The Genesis award recalls for me 30 years of a very privileged history and honor of serving people in my beloved hometown,” Denn said.

Denn, who recently turned 80, grew up in south Utica in a tight-knit family of six children. With Our Lady of Lourdes Church, its school and its priests and nuns always nearby, she joked that she was exposed to what she called a “Catholic incubator” from a young age, so it seemed inevitable that she would become a nun.

She graduated from the College of Saint Rose in Albany and received her master’s degree from Case Western Reserve University, Cleveland, Ohio. She then worked as a secondary education teacher throughout Syracuse, Utica and the Capital District.

After leaving teaching, she served in several Catholic parishes, including in Utica as a parish minister, outreach coordinator to the homebound and elderly and religious education teacher.

She also worked as a chaplain for Faxton-St. Luke’s Healthcare until retiring in June 2012.

“I worked alongside remarkable staff and was invited into people’s lives at the most difficult moments they were enduring,” she recalled. “What a privilege! I am so grateful to God and all whom I met who afforded me this wonderful opportunity.”

In 2010, Denn received the HealthFriends of the Year Award sponsored by Faxton St. Luke’s.

“She is always there to listen to employees, medical staff, patients and their families, which is often the best medicine,” an FSLH spokesperson said at that time.

In 2014, Denn, a granddaughter of Irish immigrants, was named grand marshal of Utica’s St. Patrick’s Day parade, an event she thoroughly enjoyed.

Just a few months after retiring as a chaplain in 2012, she took on a part-time job as a spiritual and bereavement minister for McGrath, Myslinski, Karboski & Nunn Funeral Directors in Utica, a role she still embraces.

She also volunteers at the Cancer Center at the Faxton campus of MVHS. “It’s 15 hours a week, but it’s become a ministry in itself,” she said.

“I learned so much from the nurses, patients and families about the resilience of the human spirit, and about compassion from the doctors,” she added. “What a great source of comfort, spirituality and humor they are.”

However, after a stint as a phlebotomist and a hospital technician, she suddenly found a new calling. In 1974, she enrolled at Georgetown University and came out four years later with a Doctor of Medicine degree with honors.

She spent 38 years in a variety of roles in medicine prior to her retirement in 2016.

“It has been a great privilege to be chosen to become a physician,” she said. “I have been at the amazing event of a new birth, performed resuscitation to regain life, encouraged someone through a difficult illness and grieved following the loss of a patient and friend even through natural death.”

She met her husband, Dr. Frank Dubeck, in medical school and they have been married 42 years and have two children.

McCall served active duty with the U.S. Air Force for several years as a staff physician at Offutt Air Force Base in Omaha, Neb., and has attained the rank of major in the Air Force Reserves.

She and her husband moved to the Mohawk Valley in 1985. McCall worked as a primary care physician at Slocum-Dickson Medical Group in New Hartford, specializing in internal medicine.

McCall first got involved in hospital administrative work at the Masonic Care Community in Utica, where she served as associate medical director from 1989-1993.

In 1994, she became medical director at the Court Street Diagnostic and Treatment Center in Utica, where she provided direct patient care services to an inner-city population.

From 1994-95, McCall returned to caring for the elderly again as an internal medicine physician and assistant medical director at the Heritage Home.

She then moved across the street to Faxton-St. Luke’s Healthcare as senior vice president and medical director from 1995-2001.

In 2001, looking for new challenges, she became chief medical officer at Crouse Hospital in Syracuse. Over the next four years, she was responsible for helping the hospital successfully emerge from chapter 11 bankruptcy proceedings with the help and support from the law firm that offers bankruptcy services practicing in Taunton city, who are the best in this field. If you are stressed and are feeling overwhelmed because of your debt issues, contact experienced bankruptcy lawyers who can help you solve your financial crisis.

Late in 2005, McCall moved to Rome Memorial Hospital and accepted a position as chief medical officer until June 2007.

She also taught classes in the nurse practitioner program at SUNY Institute of Technology in Utica.

In July 2007, she began her distinguished seven-year association with Excellus BCBS.

She was associate medical director in the Utica office through December 2009 before being elevated to chief medical officer Central New York and Southern Tier, working from regional headquarters in Syracuse.

At the dinner, she thanked the community for giving her opportunities to grow, and “for challenging me to achieve when it all seemed too hard and for supporting me through hardships,” she said.

McCall remains active in community service in Utica, helping out the American Heart Association and serving on the board of Sunset Wood retirement community.