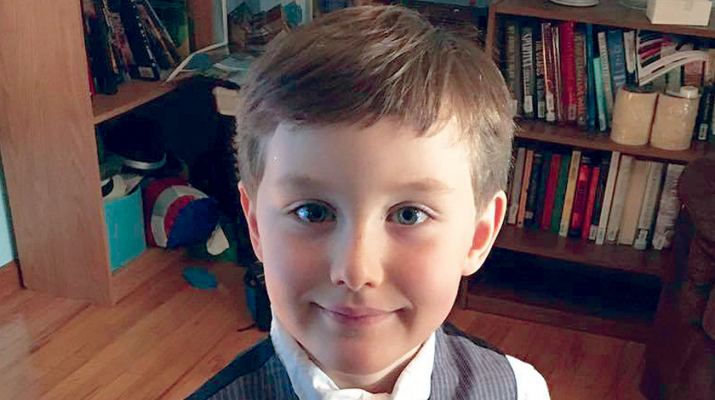 According to Food Allergy Research and Education, one in 13 children have some type of food allergy.

Colleen Kahler’s 5-year-old son Spencer was diagnosed with food allergies when he was only 4. Acccording to experts, food allergies should be taken seriously and there must be a concerted effort to understand the difficulties faced by people who experience them.

While Spencer has had eczema since he was a baby, at 3 years old an allergist initially determined he was allergic to dogs and cats.

Once Kahler realized Spencer’s eczema was getting worse, she went to a “kid-friendly doctor who had a great protocol in place for dealing with eczema, asthma, which I suspected he might have, and allergies.”

The food allergy came as a surprise to Kahler because her son hadn’t experienced a reaction to any food. It’s important to note that someone may not experience a reaction one day but could have one the next time the food is consumed.

“That’s why doctors want their patients to avoid the allergen. And each time a person has a reaction, it can get worse and worse,” the Oneida resident said.

Though Kahler was worried at the time of diagnosis and continues to worry, she says, “I try not to let it paralyze us.”

Steps to protect Spencer included making sure he had his medicines at school and informing the staff of his pre-K of the allergies. “Because Spencer was diagnosed shortly after starting school, the teachers took time to discuss his allergy with the entire class. It was great to hear that Spencer’s view of the whole experience wasn’t focused on the sesame allergy, but rather with the fact that he found out he wasn’t actually allergic to dogs,” she said.

Kahler gave a list of ways sesame is included in ingredients to her son’s teachers.

Allergic reactions sometimes seem to occur for no reason. Kahler shares that the family got a dog in November, and soon Spencer “started breaking out in a rash everywhere the dog licked him.”

The family had found out that Spencer wasn’t actually allergic to dogs, so Kahler had to dig a little deeper to figure out the cause. Kahler read the ingredients list on the dog food and discovered it had flaxseed in it, “which is in the same family as sesame. I found a dog food without flaxseed and we haven’t had a problem since.”

One difficulty for people who have a sesame seed allergy is that it is not among the top-eight allergens. For this reason, manufacturers generally don’t list it in their warnings. Kahler spent time researching as well as calling manufacturers to make sure Spencer’s food was safe for him.

Isolated but not alone

Now Spencer is in kindergarten, and he sits in an area of the cafeteria to keep him safe. “Because he’s so little, the cafeteria can be intimidating, but as he’s getting used to it, he is starting to meet new friends who can sit next to him on the other side of the tape,” Kahler said. Of course, Spencer’s safety is the top priority, but Kahler also wants her son to feel included.

One way she plans to make him feel like part of the group is to provide “a treat for him to have when the class celebrates birthdays.”

While we may not all face an allergy, we can make a difference in the quality of experience of those who do have them.

Kahler said,” “I’ve had other moms send me food labels or recipes for treats they were planning to make because they wanted to include Spencer.” She appreciates this considerate action.

“I find that so reassuring that kindness still exists in this world. I’m not sure I can ever express to those moms just how much it meant to me that they went to great lengths on behalf of my son,” she added.

In addition, attempting to understand how serious the issue is as well as empathizing with those impacted could go a long way. “I often feel like people try to minimize the threat of food allergies because they don’t fully understand it. And because people haven’t heard of sesame seeds in many foods, they assume it’s not as serious as a peanut allergy,” she said.

Kahler said she must monitor everything her son eats and call restaurants in advance.

With Halloween just around the corner, most kids are probably excited and worry free. For kids with food allergies, it is not so simple.

The Teal Pumpkin Project allows families to put a teal pumpkin outside their home to let trick-or-treaters know that house offers allergy-friendly candy or non-food treats.

Kahler’s family took part in it last year. “If we can help even one child feel included and safe, it’s well worth the effort,” Kahler said.

Learn more about the Teal Pumpkin Project at www.foodallergy.org/education-awareness/teal-pumpkin-project.

The Central New York FARE walk is held in August, and raised over $15,000 for research, awareness and advocacy in 2017.

In 2013, Kahler’s cousin, Kristen Scanlon, started a local walk after discovering her son had a peanut and egg allergy. Kahler became involved to support her cousin, but later realized “it’s a whole different feeling when you’re fighting for your own child’s life.” Kahler is on the FARE committee, which “has become an excellent source of support,” for her, she said.