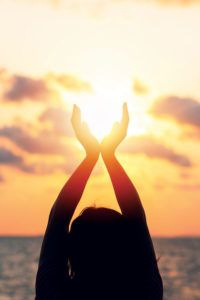 (Editor’s note: This is a three-part series discussing the existence of the spirit realm. The first part is an introduction; the second will be on our unseen enemies, and the third, on our unseen allies.)

“When Elisha’s servant rose early in the morning and went out, behold, an army with horses and chariots was all around the city. He asked, ‘Alas, my master! What shall we do?’

“Elisha said, ‘Do not be afraid, for those who are with us are more than those who are with them.’ Then Elisha prayed and said, ‘O Lord, please open his eyes that he may see.’ So the Lord opened the eyes of the young man, and he saw, and behold, the mountain was full of horses and chariots of fire all around Elisha.” — 2 Kings 6:15-17

Our family had the opportunity to do some heavy traveling in the last few weeks (more on that in a future column), and one of the places we visited was Sedona, Ariz. Among the typical lures of Western U.S. tourism such as horseback riding, off-road Jeep tours, and Native American jewelry, there was a Sedona-specific curiosity that we didn’t see anywhere else: aura photos.

I was fascinated by the idea of an aura photo shoot, and I had to find out more.

An “aura” is essentially a color scheme assigned to a person’s individual energy output. In a photo session, the subject presses their hands onto electromagnetic sensors that measure their energy output. The photo is then run through a computer program that assigns a color to each frequency. The final product is a portrait with hues of reds, greens, oranges, yellows, and violets overlaying the person’s face, depending on their “energy reading,” which the photographer claims (with proper interpretation) will give the customer hidden insights into his or her persona.

While the interpretive application of this process may be completely left field in terms of its scientific veracity, one thing that struck me as wonderfully interesting was the effort to capture a snapshot of energy.

We are full of electricity. There is a source of energy present in the living that distinguishes them from the dead. It is this invisible force that manifests itself in action, conversation, dreams and desires.

There is no arguing the existence of unseen physical forces. We feel and experience the benefits of air every moment of our lives without visible proof of its presence. Radiation that is able to both cause or cure cancer cannot be seen by the naked eye.

Ideas have powerful consequences on the lives of individuals, societies, even nations — but remain invisible.

Unseen forces have always been present, and sometimes, powerful enough to change the course of our lives.

The Bible describes not only the duality of man — his flesh and spirit — but also the duality of the realms in which man operates — the physical and spiritual. The physical realm is easily discernable, but the spiritual realm functions outside of our sensory perception.

It is always present and yet remains shrouded in mystery, leading many to conclude that it therefore must not exist.

We live in an age where secularism has given rise to naturalism — the belief that the material world is all that is, and all that will ever be. Consequently, we are instructed to ignore the pull that seeks meaning in a benevolent higher power, or fears the advances of a wicked one, and to take pity on the archaic civilizations that were so bound by religious constraint.

Evolutionary thought gives rise to a few key ideas here. One is that a lesser-evolved human group needed the crutch of religious inclination to explain natural phenomena, whereas today we have those answers in the material world and therefore can cast aside such superstitions.

The second is that everything around us advances from a state of less, to a state of more — from stupid to smart, from bad to good. In fact, the whole theory of social evolution itself pivots around this critical point — that time is the catalyst of progress. Propagandists go to great lengths to convince us that we are indeed better — ethically, physically, and intellectually — than our antiquated predecessors.

A secular society which rejects the idea of original sin, or corrupted inclinations of the human heart, has no choice but to swallow that pill marked “inevitable social progress,” but we have to choke it down with a chaser of uneasy resignation to our better judgment.

The result is that we have lost not only a great sense of the sacred outside of ourselves, but also the wonder of our own spiritual identity. We have abdicated our status in the hierarchy of creation, choosing to believe that instead of image bearers of God, we’re just smart animals, acting on predetermined impulse and destined for nothing more than immediate gratification.

To say the implications of such ideas have had dramatically unpleasant consequences on society is a laughable understatement. A person without a spiritual identity is a caricature of who they were created to be.

God is described as a spirit being who is invisible, and whose invisible attributes may be clearly seen — namely, his eternal power and divine nature — in the things that have been made (Romans 1:20).

The sense of awe we feel when we stand at the foot of vast mountain ranges, scale the cliffs of deep canyons, or peer into the face of a new baby are all echoes of the resounding cry of our creator that causes us to respond in worship, whether we recognize that response or not.

Some of us will worship the creation itself; but the creation is a guidepost to the creator, and to truly know ourselves, we can’t just linger at the trailhead. We must explore it.